Since I'm writing this late, I don't really remember the month of February too clearly, but we had some good (winning smoothies for a year), some bad (the passing of Dave's grandma), and lots of busyness in between. I think I'm starting to learn that things never really slow down for us. Now that our family is bigger we will always have stuff going on, and I think I'm ok with that!

We kicked off February with a family swim night at WT. Charlie has come to really love the pool and loves cruising around the wading pool in his baby float. At one point he wandered a little to close to the dumping buckets and caught a big splash right in his face. Poor guy :( 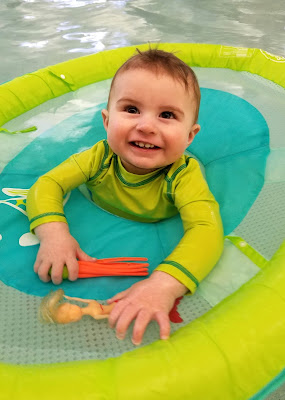 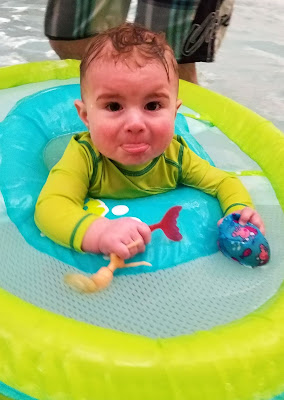 The Discovery Center changed their rotating exhibit. We said goodbye to "Rescue" and welcomed "Battle of the Titans." It doesn't even come close to the Museum of Ancient Life at Thanksgiving Point, but the kids are super into dinosaurs right now so it's been fun. 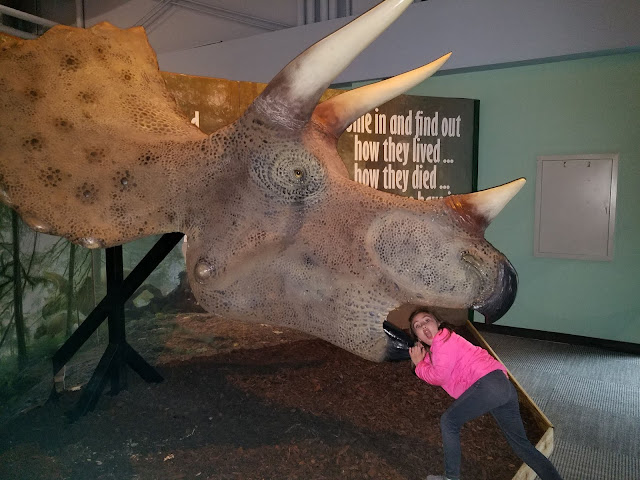 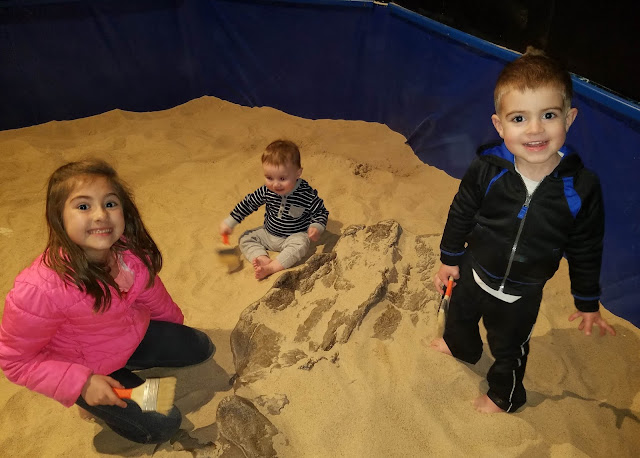 These big foam blocks had been in storage, but they brought them back out when the new dinosaur exhibit was set up. The kids asked me to build them a castle. 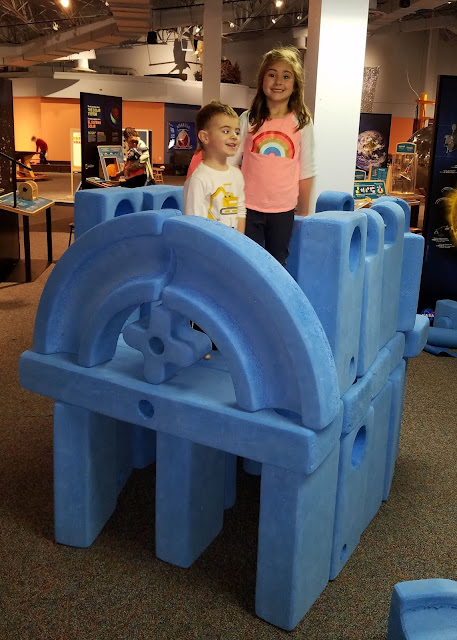 Davey continues to love puzzles. He can do most 24 piece ones on his own, and has even tackled a few of Sophie's bigger one. This princess tower was 48 pieces and the only help I gave was to find the missing pieces that had fallen on the floor! 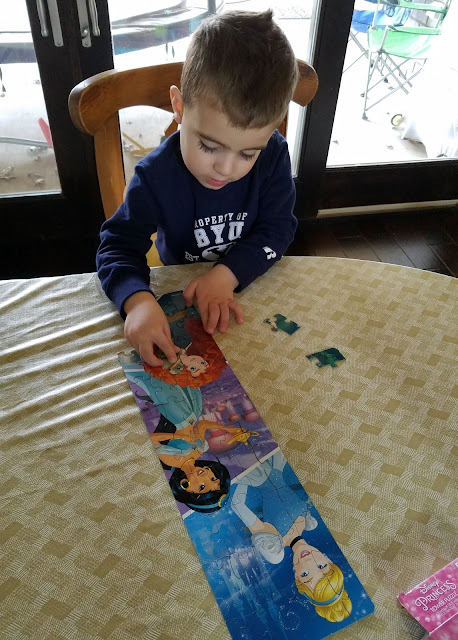 Dave left us for 5 days for a trip to Chicago for his grandma's funeral. We sent him this photo to let him know we missed him (and were still alive). 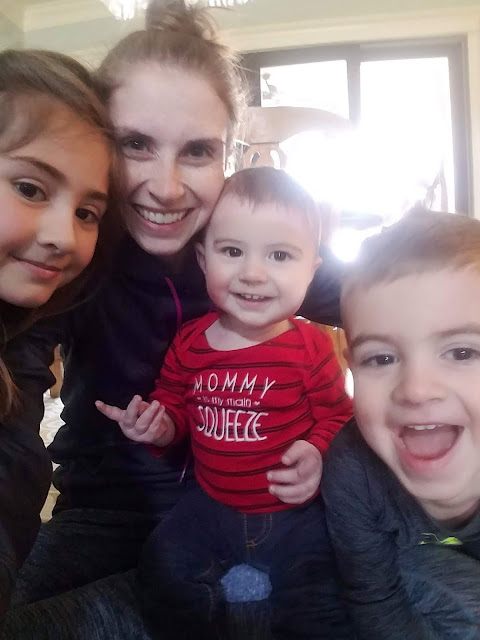 While Dave was gone, the sporting goods store near our house had a massive "spring cleaning" blowout sale, only I didn't hear about it until I sat down for Charlie's nightly feeding. So instead of bedtime, I loaded all the kids into the van in their pajamas and we went on a shopping spree. All this stuff, plus a few other things not pictured, was purchased for under $100! 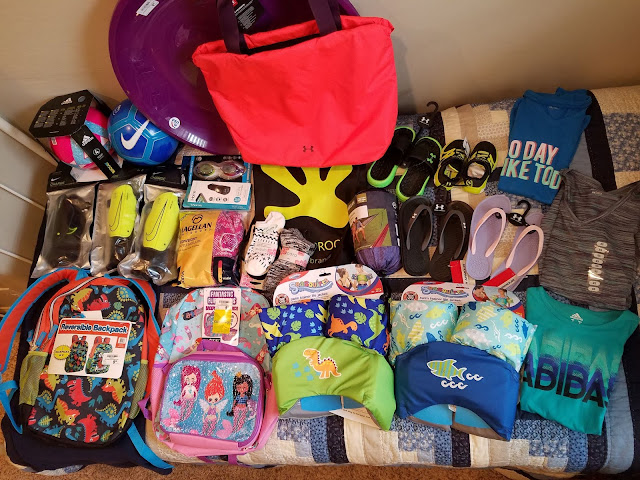 Davey requests dinosaur noodles almost every day for lunch, but one day I decided to change things up and made chocolate banana muffins instead. They were a hit! 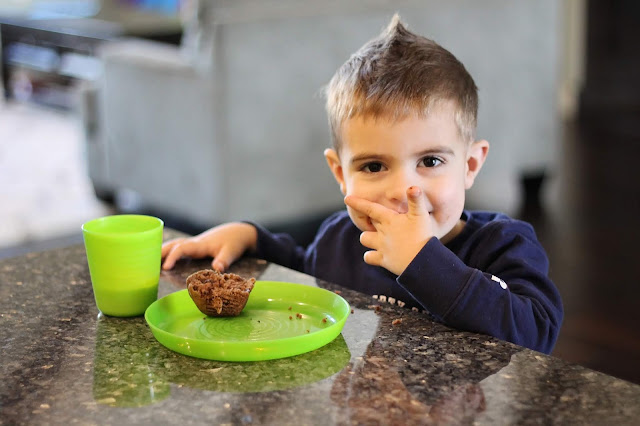 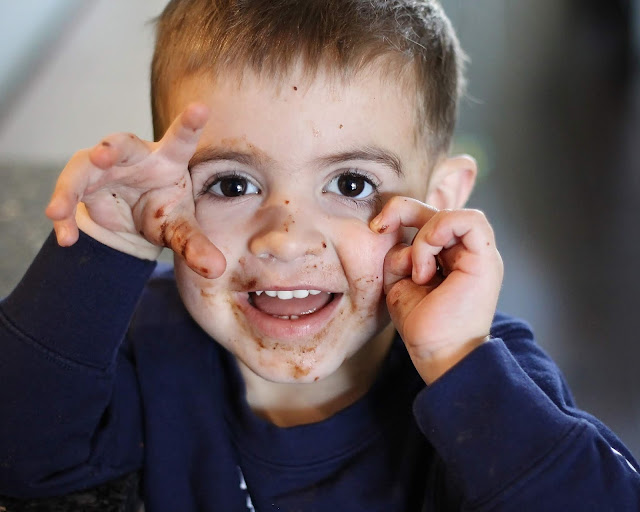 I let the kids play with my camera before bed one night. Sophie took hundreds of photos, but this was the only one I kept. It was fun to look through the camera roll with her, and then move them all to the recycle bin. Hooray for digital. 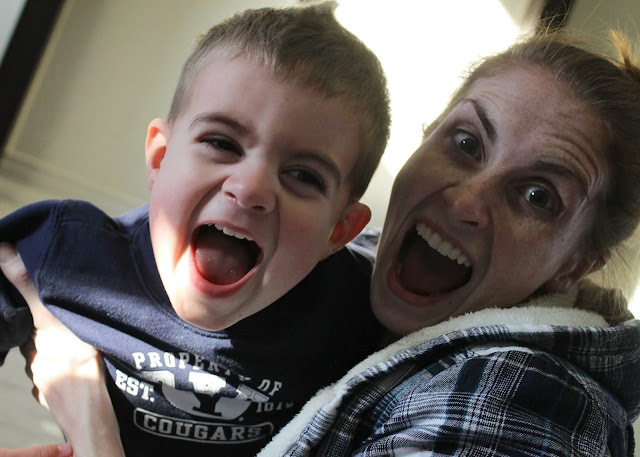 This big tractor has been working at the south end our neighborhood for several weeks now. One Sunday I took the kids out to get a closer look while it was "resting." We always see it driving around in the middle of the field, but it was much bigger once you got close! 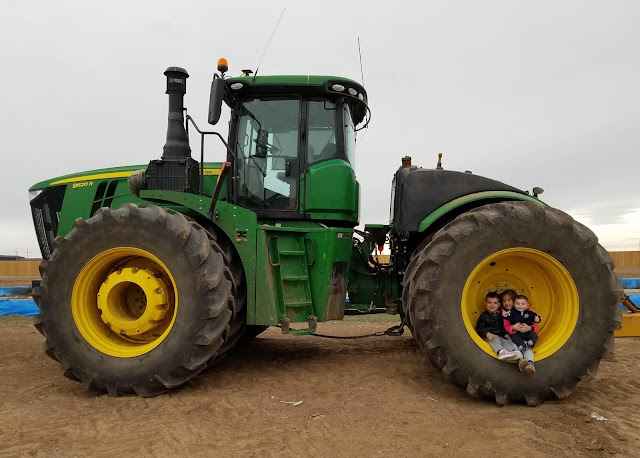 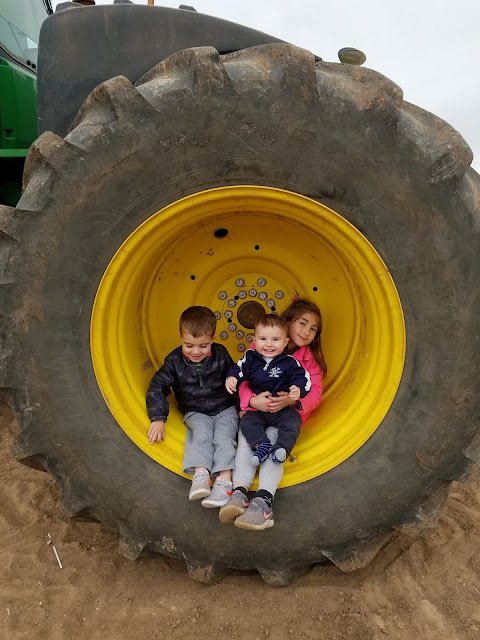 Charlie is getting more adventurous now that he can stand. We really have to watch him in bathrooms because he loves to unroll the toilet paper, sift through the garbage, and turn on the bathtub. 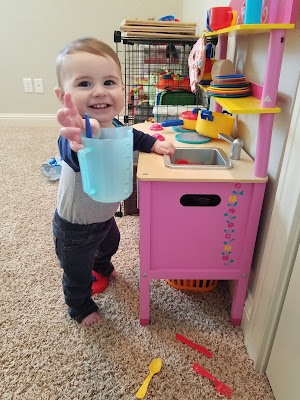 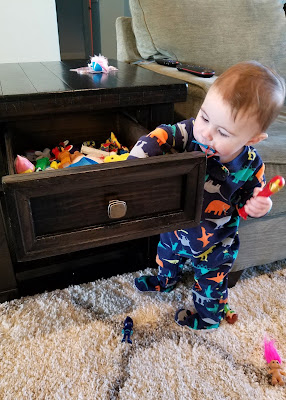 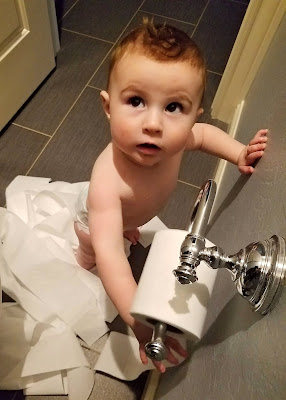 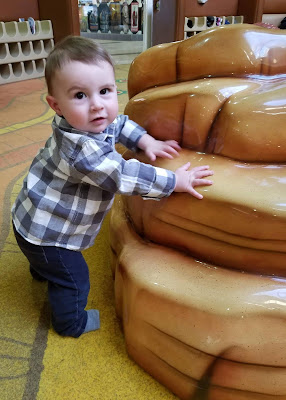 Sophie brought this home from school and I hung it on the fridge so she would remember he goal to "be nicer" to Davey. Acknowledging the problem is the first step! 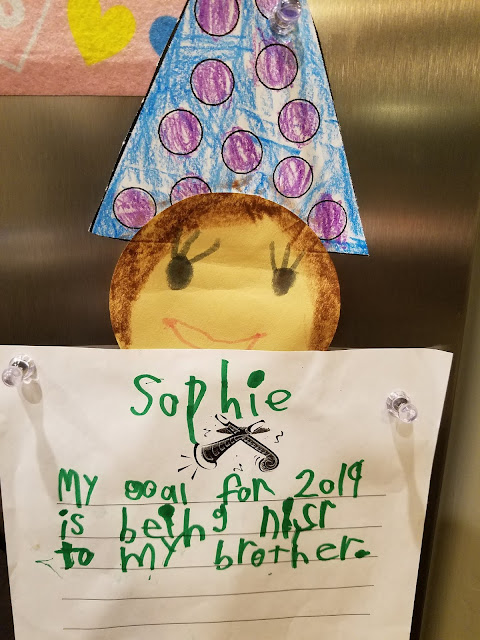 He's growing fast, but still fits in the kitchen sink 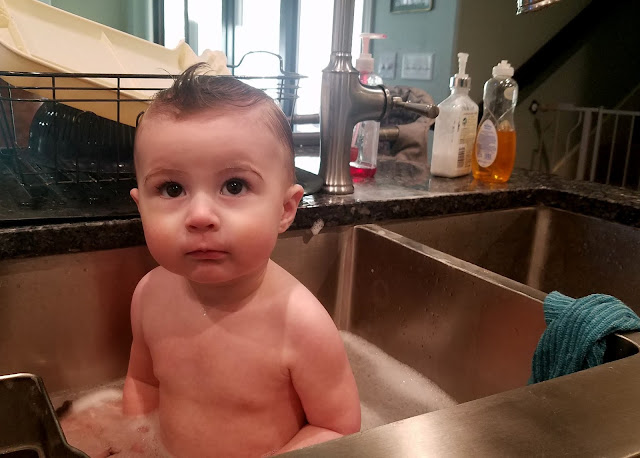 Swim night at WT, and this time Sophie brought her friend Emery. 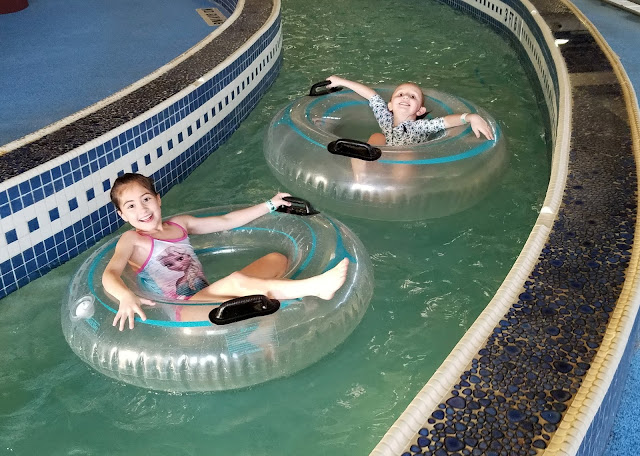 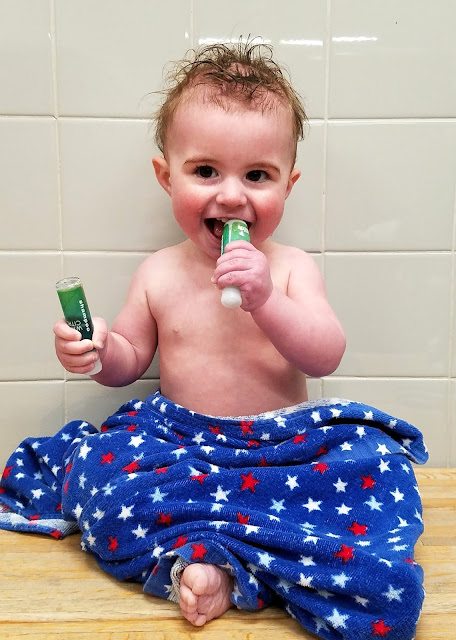 Charlie sleeping on the floor during YW, and the girls were all so jealous that he got to nap during church. 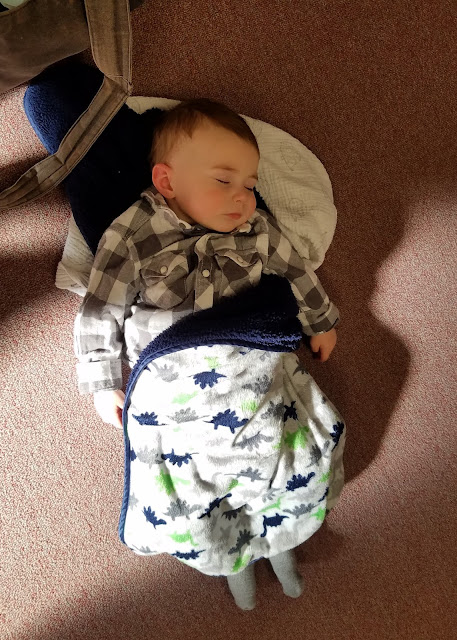 I'm not sure who was putting who to bed here tonight...