Back in October we were at a park after one of Sophie's soccer games. There was a silent auction to raise money for a wildlife rescue charity, and one of the items up for bid was a "Two Hour Birthday Party Package" from Lonestar Scales & Tales. We had no idea what that entailed, but no one had bid yet, so we put down $60 and ended up winning!

Months later we redeemed our party for Sophie's birthday. I found out the actual value of the party was $250 (we got a deal!) and it turned out to be awesome! The facility was great, almost like a mini zoo. There were animals everywhere, and the kids just went from enclosure to enclosure saying "Wow! Come look at this!" We brought a cake and a craft for the kids, but the rest of the time was spent looking at and handling different critters. We didn't even end up doing the pinata because time ran out. It was the perfect party for our animal loving girl!


We invited Sophie's preschool class, a few friends from church, and a friend from swimming lessons. We ended up with 10 kids at the party, which was about perfect. Grandma and Grandpa Howe also came up from Dallas and it was so nice to have them their to help with Davey and Charlie so we could focus on the party. 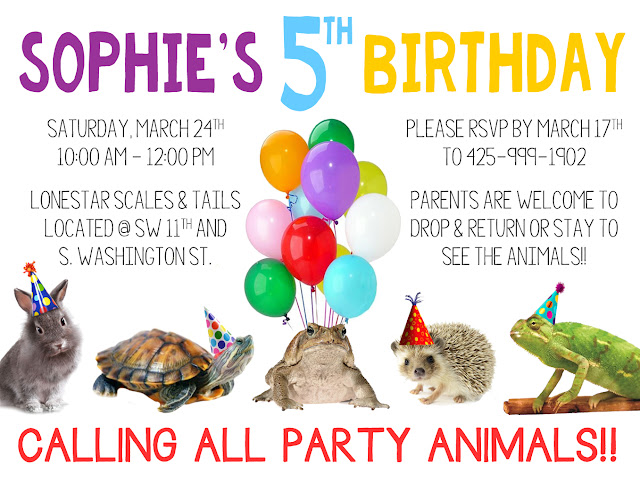 These parrots greeted us when we entered and kept chattering throughout the party. I kept hearing them and thinking it was Charlie crying :) 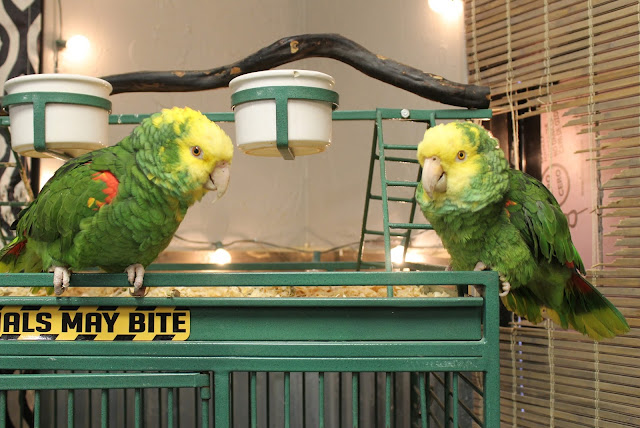 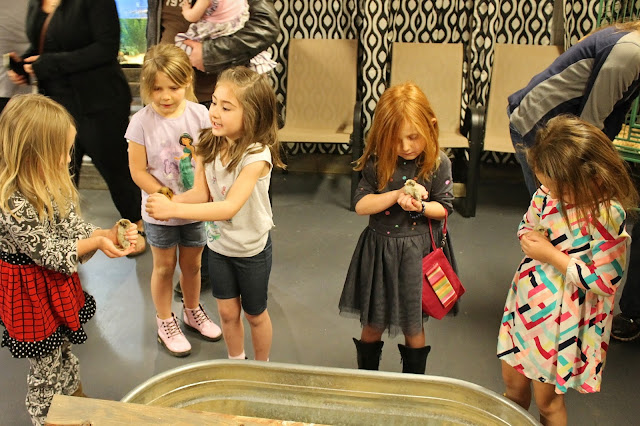 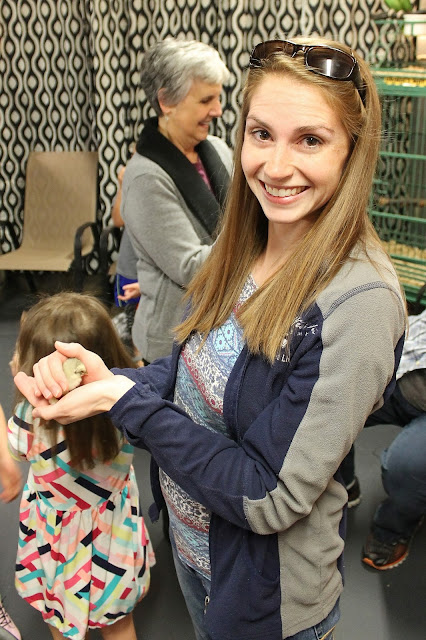 Even with grandpa's supervision, Davey's poor chick may have been strangled a few times. 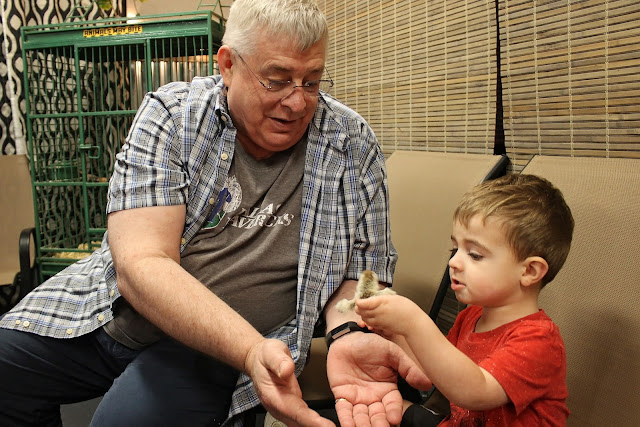 After everyone arrived we did cake. I never took a good picture, but it was a big purple snake made from cupcakes. I used Oreo cream and mini chocolate chips for the eyes and some fruit leather for the tongue. 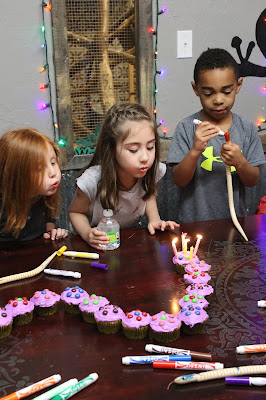 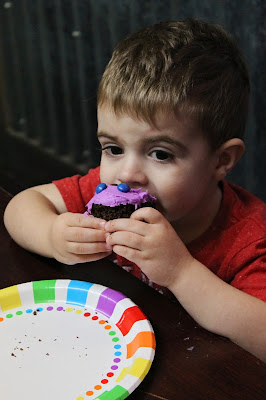 After cake we moved over to the other side for the animal presentations. They started off with a snake, one of Sophie's favorite animals, and she got to hold everything first since she was the birthday girl. 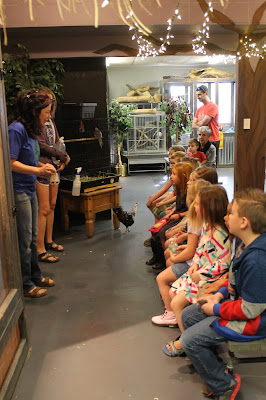 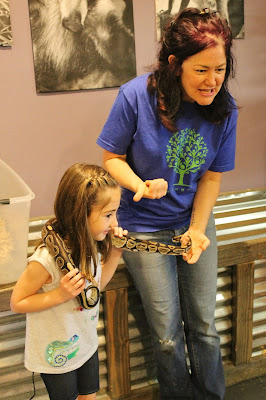 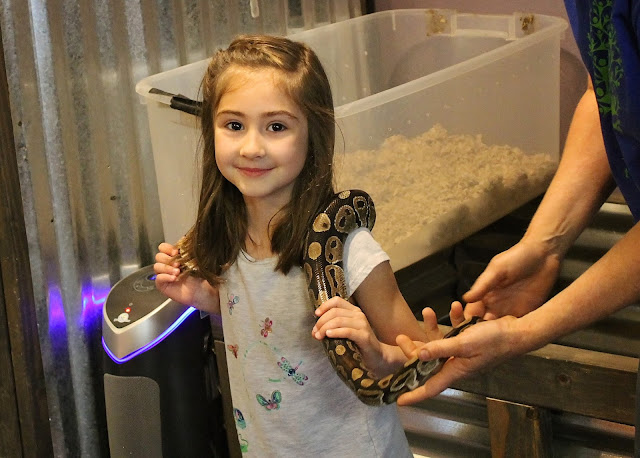 Sophie brought her stuffed snake "Sissa" in case any of her friends were too scared to hold the real snakes. 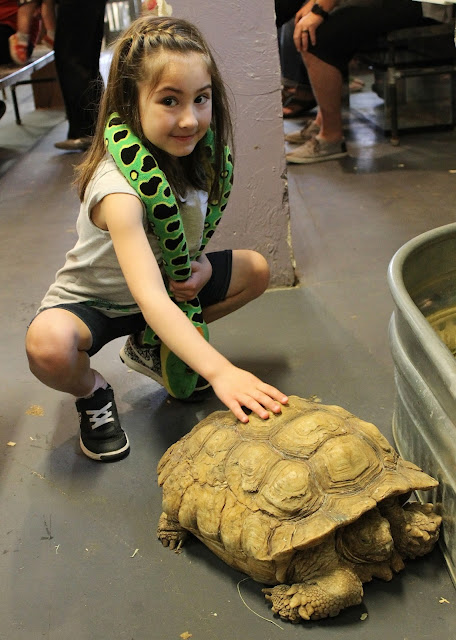 Her favorite animal was "Rainbow" the chameleon. 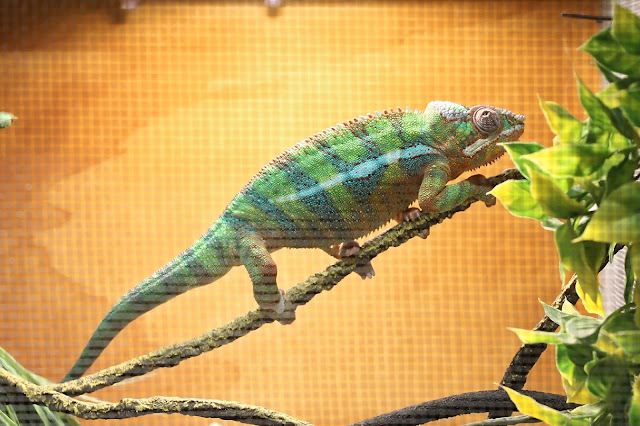 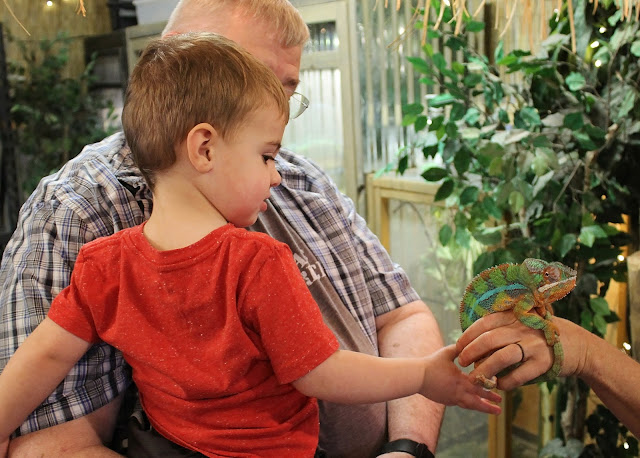 Holding the big snake with all her friends 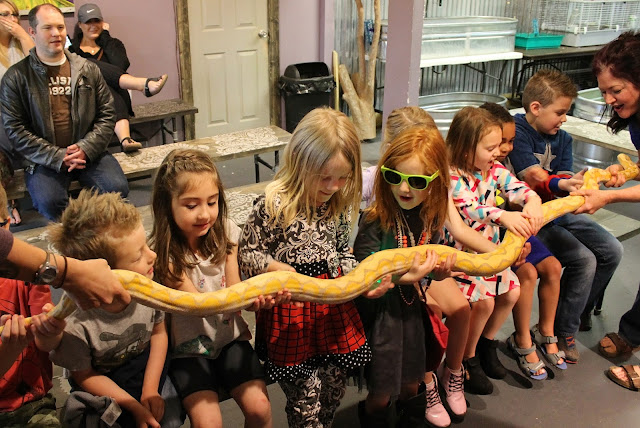 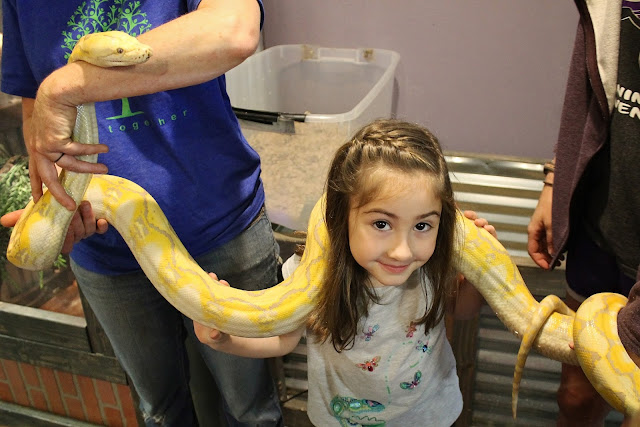 No fear! Wearing a Madagascar cockroach instead of a birthday crown. Later she held one in her hand as well. 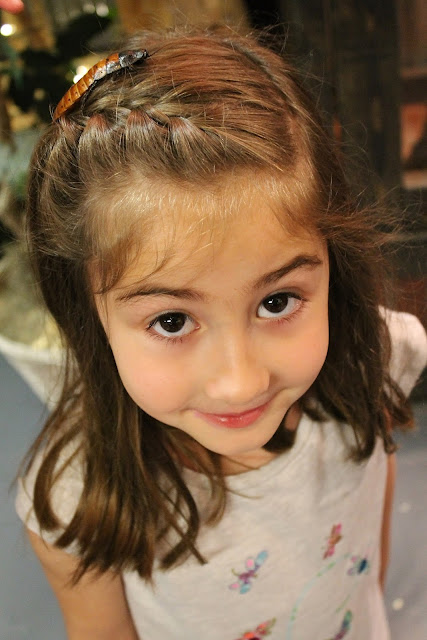 After Sophie had a cockroach on her head, all the other kids wanted to do it too. 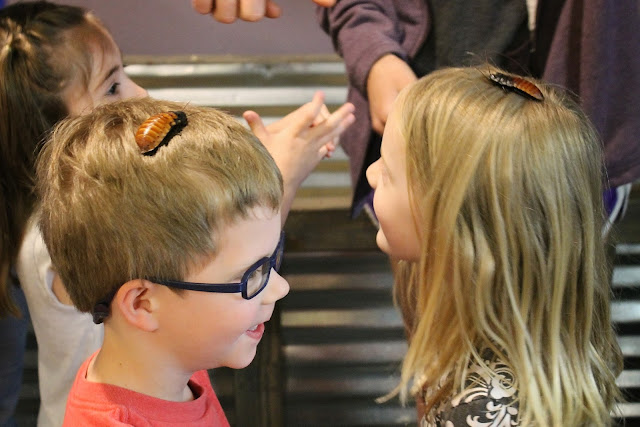 Bunnies! They were so soft and fluffy and a nice change from the creepy crawlies. 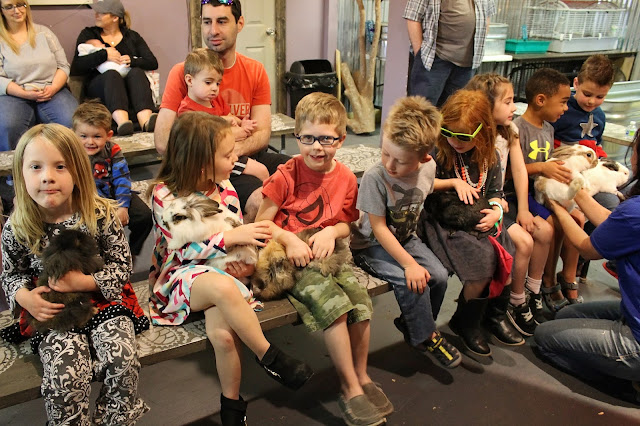 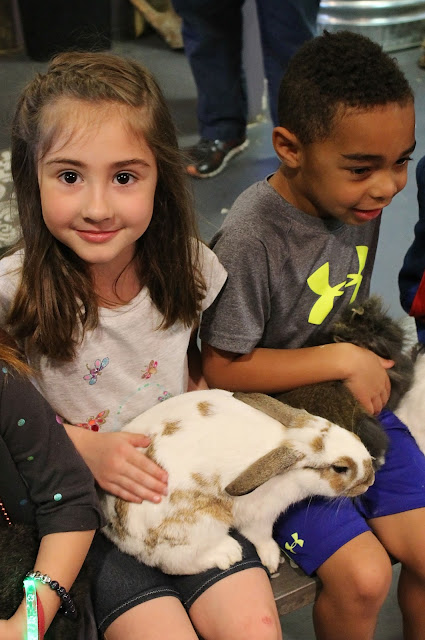 With "Happy" the cockatoo 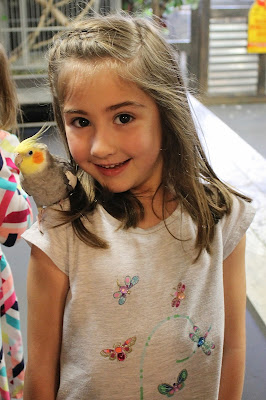 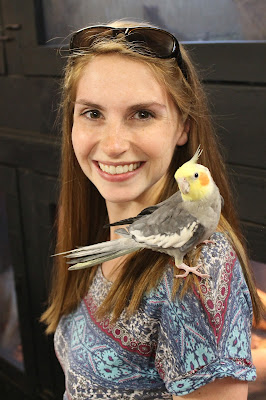 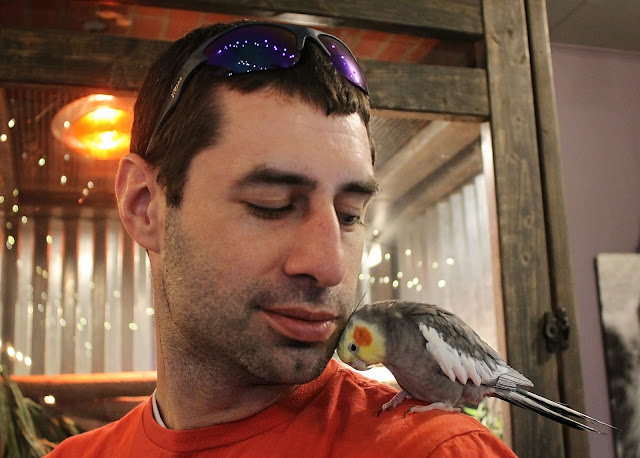 We didn't get to hold any lemurs because they are aggressive towards anyone who isn't a member of their "tribe," but they watched us intently throughout the party 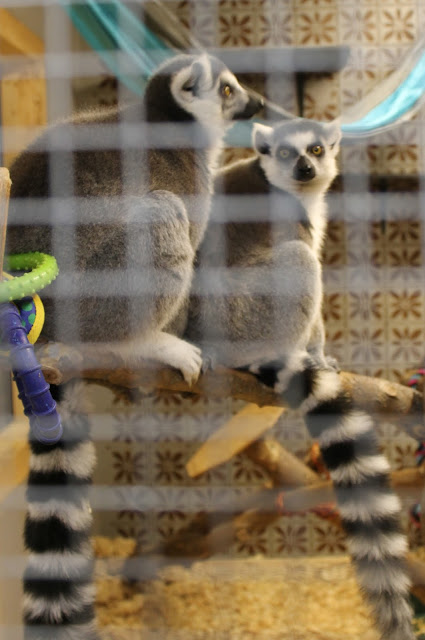