Obviously March was a big month for our family! Not only did we welcome little Charlie, but Davey and Sophie also celebrated birthdays, we had visits from both sides of the family, Dave traveled to Utah for a wedding, and we got ready to celebrate Easter. Phew!

I was relieved when I turned my calendar page and the only thing written down for April was "Pay Preschool Tuition." March was fun, but exhausting, and I'm looking forward to a month of very regular days. Goodness knows our kids have had enough cake, candy, and gifts to last awhile!

Here were some other March happenings:


Sophie dumped out ten, 24-piece puzzles and mixed them all together because "Davey wanted her to do it." Let the sorting begin... 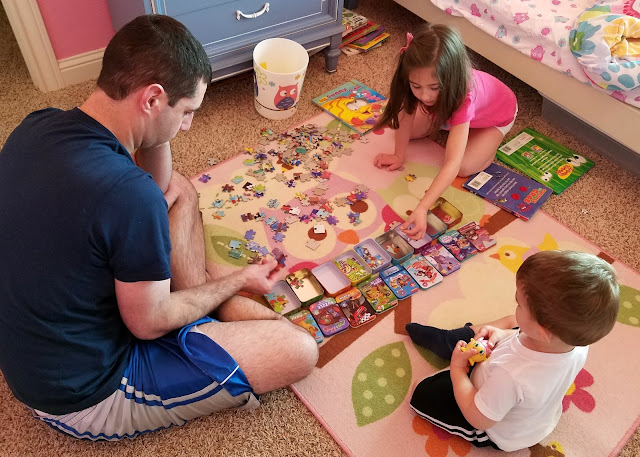 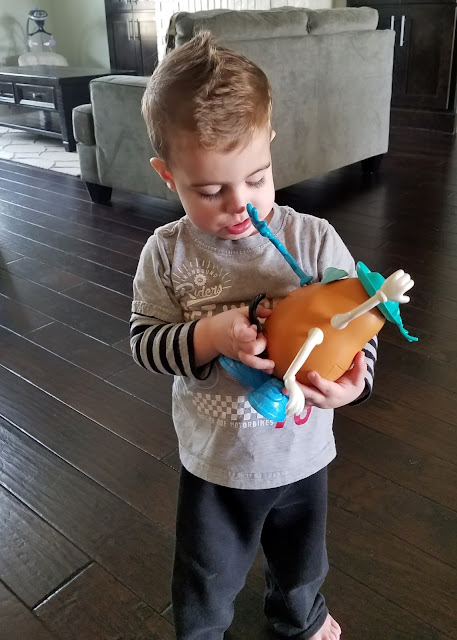 The kids quickly learned that they have free reign of the house while I am nursing. One day Davey climbed up on the island and was dancing around. Sophie was afraid he would fall off and surrounded the island with pillows and blankets so he would have a soft landing. Ha. I wish this was the most troublesome thing to report. More recent incidents include Davey taking a bath in the master tub with his clothes on, the kids climbing into the van to repeatedly honk the horn, and Sophie eating half a bag of Cadbury mini eggs. 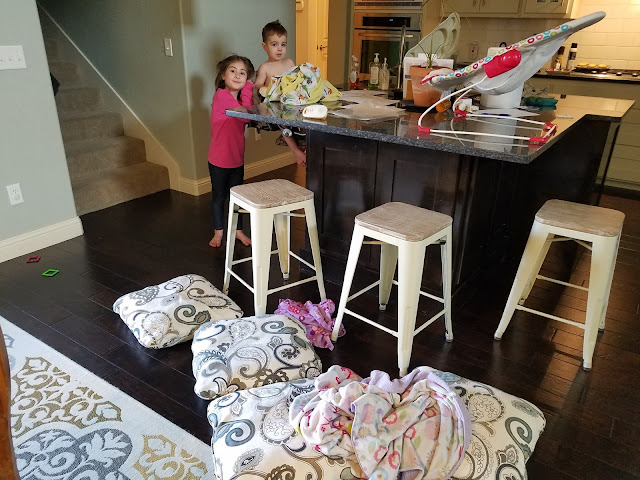 Dave left for Utah the day after we brought Charlie home for Todd's wedding. Todd and Tiffany were married in the Provo City Center temple and I was so glad Dave could make it because he has been friends with Todd since elementary school. 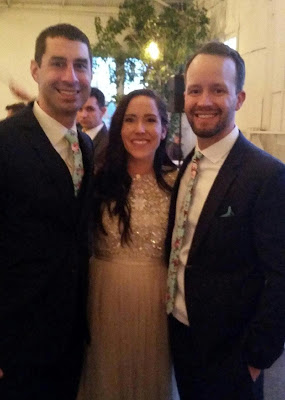 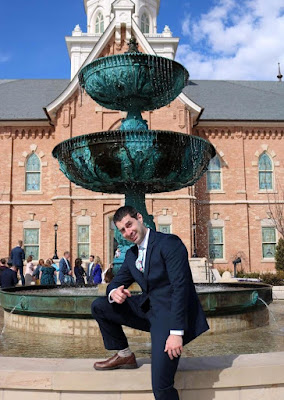 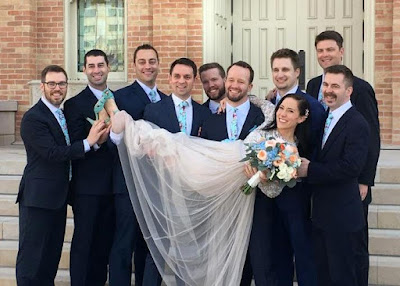 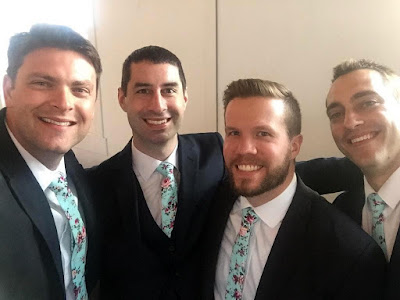 All the wives went as well (except me because of Charlie) and they were able to have some fun times without kids over the wedding weekend. 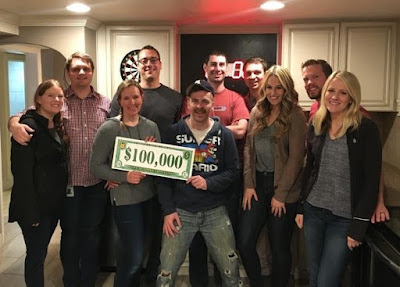 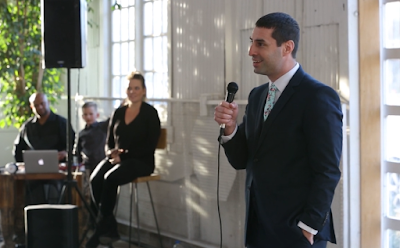 It's always breezy here and we often have winds in the 30-40 mph range in the afternoons and evenings. One night we went for a walk when it was really blowing hard and Sophie peeked into the stroller and said, "Welcome to the Amarillo wind Charlie!!" 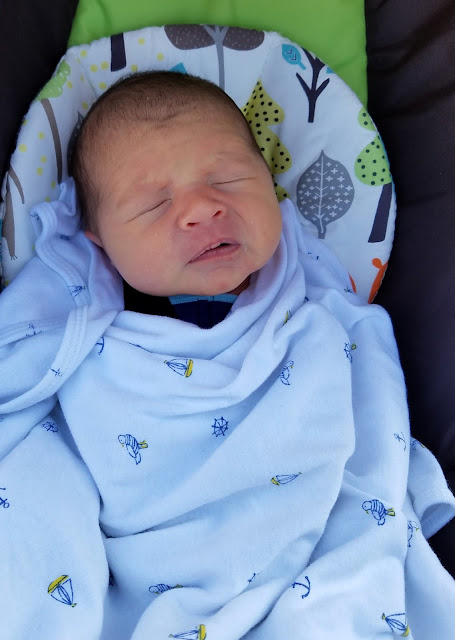 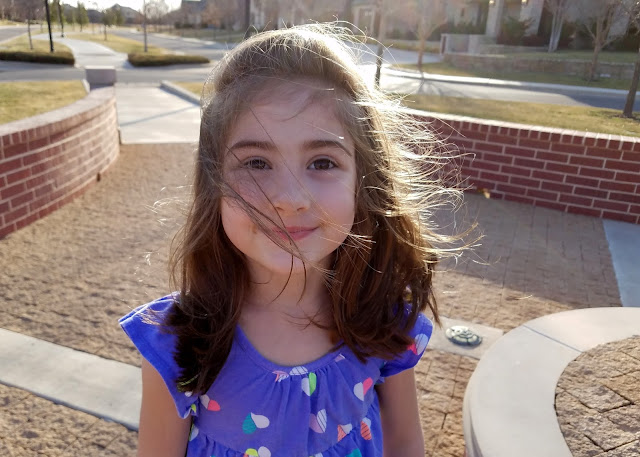 This month was Daylight Savings. We still haven't figured out how to do bedtime while it's still light outside, but at least the time change has given us some pretty sunrises. 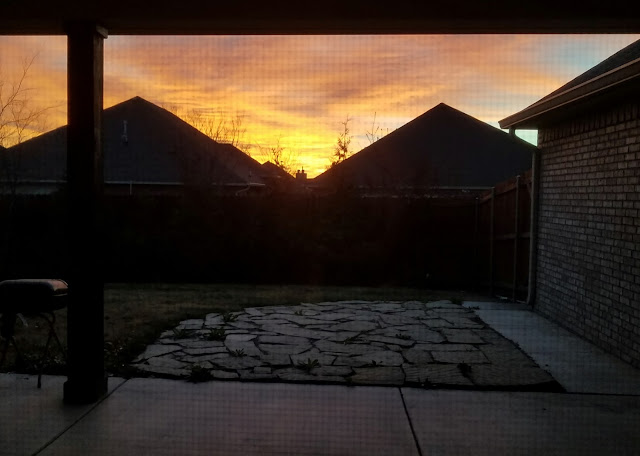 March also brought us the first rainfall in over 5 months. Since October, Amarillo had only received .01 inches of rain, breaking a drought records from the 50s. Sophie has been praying for rain and when it finally drizzled a bit one morning, she ran outside and jumped for joy. 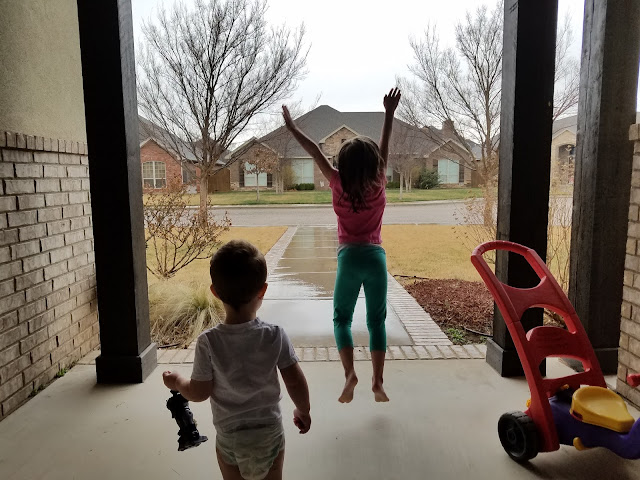 Dave was working on his computer and Sophie wanted to help so he let her login to his email. It took her almost 5 minutes to type in the username, after which she declared, "Wow! I am like a sloth at this!" 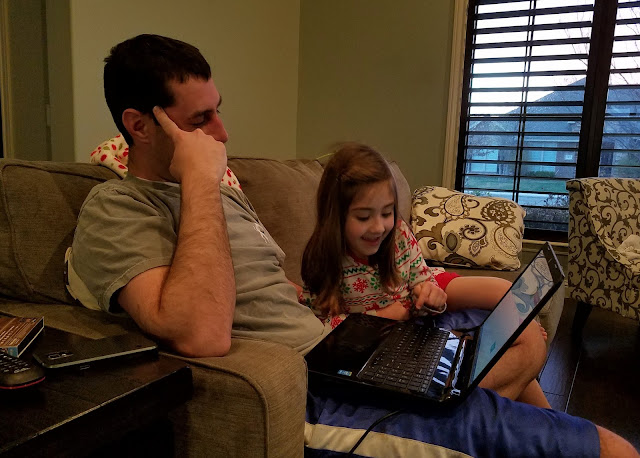 Dairy Queen was giving away soft serve cones on the first day of spring. Yay for free ice cream and the end of winter! 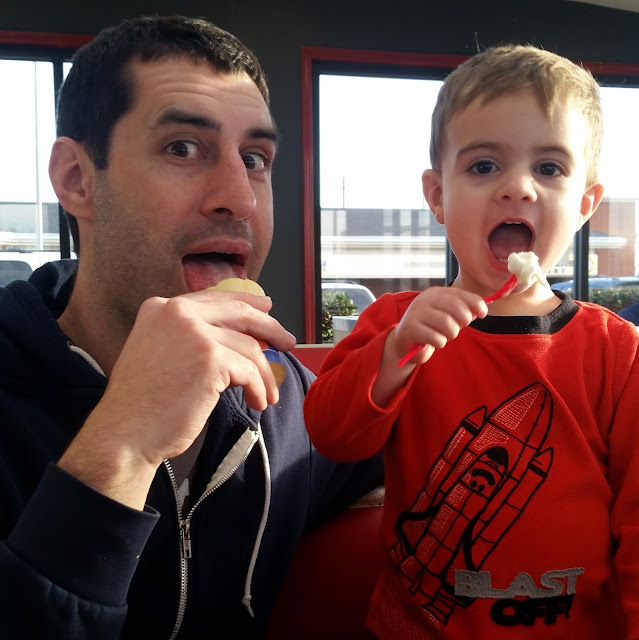 One afternoon Sophie spent over two hours working on the puzzle I made for her birthday... 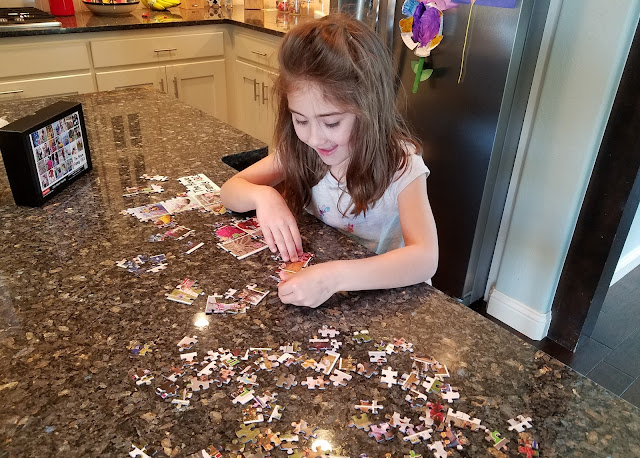 ... and then Davey destroyed it in 10 seconds the next day while she was at preschool (another nursing incident). When I caught him, he said "I fix it" and started trying to put it back together. 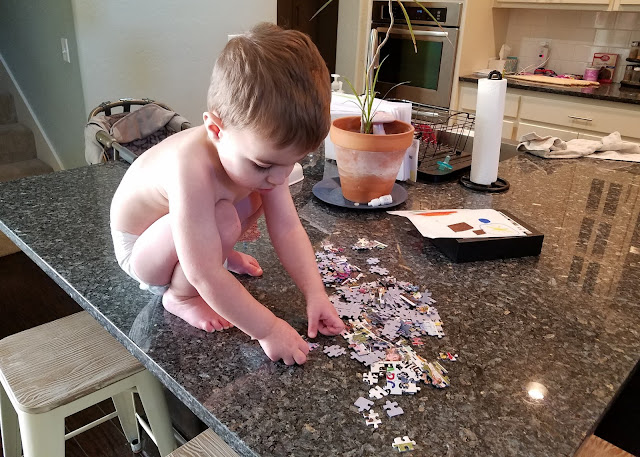 One of our first outings after baby came home was to the Discovery Center. We found some new block tiles in the kid's area and Sophie had a fun time making different pictures. 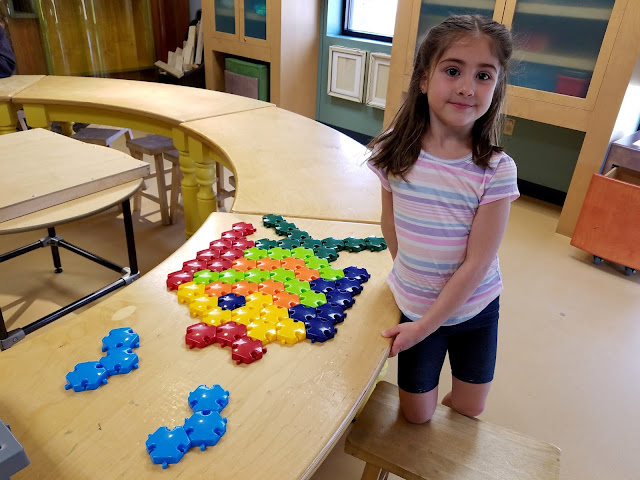 We made Sophie and Davey! 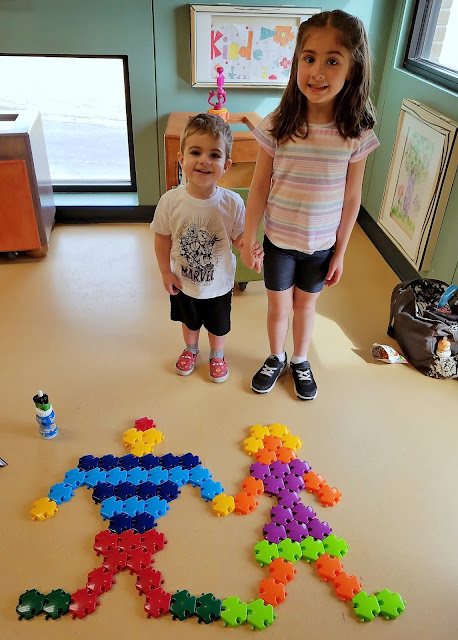 Three March birthdays means three well-child checks, and I was able to schedule them all for the same afternoon. It was a long visit, but we survived and everyone is healthy and growing well! 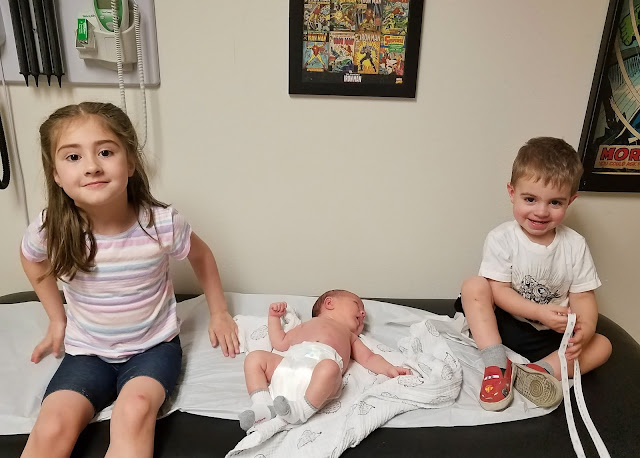 Folding laundry with Charlie. It's amazing how adding one tiny person can somehow triple the amount of laundry our family produces. 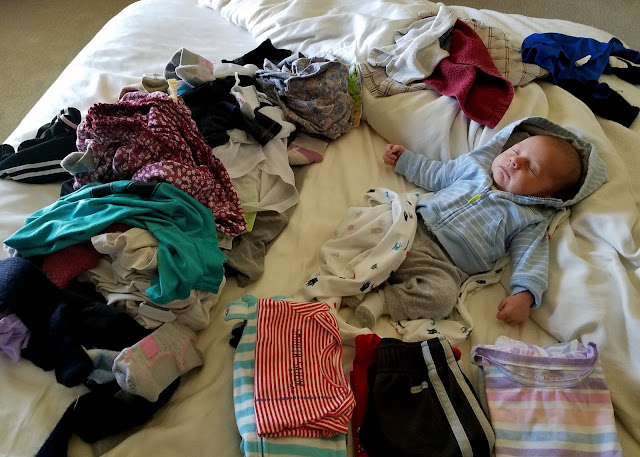