Long story ahead.... scroll down to get to the pictures :)

Tomorrow is Davey's second birthday. It feels like I was just writing his birth story, and now we've added another little boy to the family. I figure I better get Charlie's story written here soon before I start to forget the details, and before we get busy with his sibling's birthdays. March is going to always be a crazy month for us!

Heading into March we had some anxiety (or at least I did) about the timing of Charlie's arrival. I was due on the 4th, and my mom was flying in from Seattle on the 5th so we didn't really want him to come early. BUT.... my mom could only stay for a week and Dave was hoping to leave on the 8th for Todd's wedding in Utah, so we didn't want him to come late either. It was a tight window. My doctor also refused to induce until 41 weeks or sweep my membranes, so I wasn't going to get any professional help to get labor going.

When my due date arrived and I hadn't felt a single contraction, I started looking into ways that I could help start labor on my own. I wasn't ready to try castor oil just yet, but I had already been walking and stretching for a few days, and we borrowed an exercise ball to bounce on from a family in the ward, and I put a lot of spicy seasoning on my steak at dinner. I don't know if any of those things made a difference, but that night I woke up around 2 am to cramping.

When it didn't go away after a trip to the bathroom and walking around a bit, I decided to run a bath. I still felt ok, but noticed that the cramps were starting to come in waves every 4-6 minutes. Labor was starting! I was excited, but hoping I could make it until morning so we wouldn't have to call a babysitter over in the middle of the night. After the bath, I got my bag all packed up, got out breakfast and clothes for the kids, ate a quick bowl of cereal just in case it was my last meal, and then laid back down to try and get some rest.

By 6:30 am, the contractions were still happening, but had slowed down. I woke up Dave and told him today was probably the day and he should get ready, and then texted a sister in our ward to see if she could come over to watch the kids. She showed up at 7:30, and then Dave and I left for the hospital.

On the drive over, my contractions slowed even more. I knew the hospital wouldn't admit me at that point, so instead we went to a park across the street and walked for an hour. Then I started to get cold, so we hopped back in the car and drove over to Walmart so we could continue our walking indoors. After another hour without much progress, we were both feeling hungry so we left for McDonalds to get a quick bite to eat. By then I was starting to get tired and discouraged. We debated going back home to rest and see how things progressed, but since we were so close to the hospital, we decided to go up to labor & delivery to at least get checked.

We arrived around 10 am, and a nurse did my intake and an exam. I was at a 4, which was progress, but still not in active labor. She told me to go walk for another hour while she consulted the doctor, and then return for another exam. So for the next hour Dave and I went on a grand tour of the hospital. I was too tired to climb up the stairs, so instead we kept taking the elevator up to the 8th floor, and then walking all the way back down to ground level. It did keep the contractions going and when we returned, I was at a 5 and they decided to admit us. Thank goodness!! 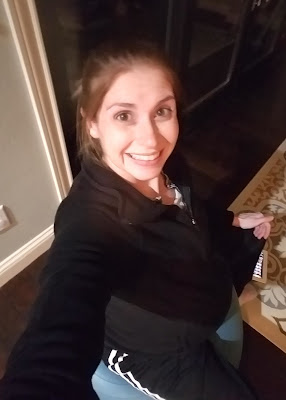 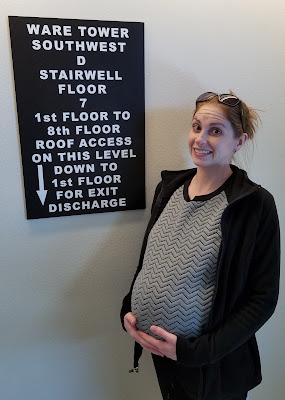 The doctor came in to break my water to try and get things moving along and for the next few hours I just rested and watched the monitor, hoping to see my contractions pick up. When they didn't, the nurse decided to start me on some pitocin to get things moving. The contractions immediately picked up, before the drugs should have even had a chance to enter my system (maybe it was all mental?) and shortly after the anesthesiologist came in to give me the epidural.

Just like with Davey, the epidural only worked on my left side at first. They gave me a second dose and had me roll on my side, which still didn't help that right side go numb. Other than some tingling in my toes, I could still feel everything. The nurse was going to call the anesthesiologist back up to see if a second line needed to be placed, but realized it was too late to do anything. I was already at a 10 and it was time to call the doctor in to start pushing. I was worried because the pain was really intense, but as soon as they had me roll off my side on to my back, everything went numb - perfect timing! 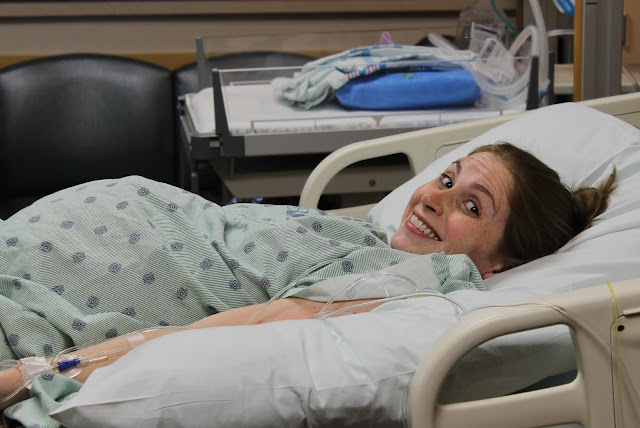 It took about 6 contraction cycles for Charlie to be born. I was giving my best effort, but was running off little sleep, had walked all morning, and hadn't eaten for 8 hours. I was tired and the doctor was worried I might not be able to push him out on my own. He told me they might have to use the vacuum to assist, but while they were getting it ready, Charlie made his grand entrance. He didn't cry much and I got to hold him right away. It is always so thrilling to finally meet the little one that you have carried and thought about for 9 months! 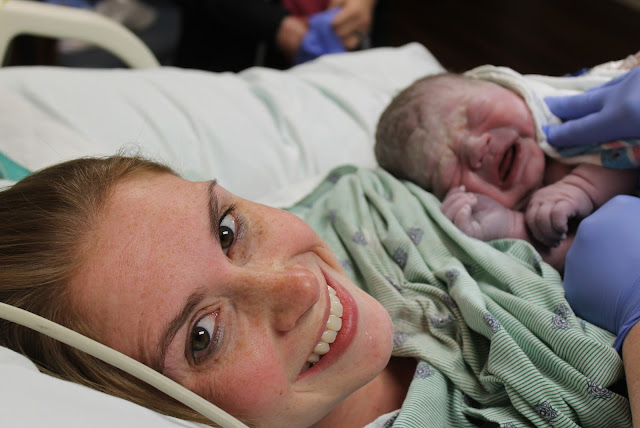 The doctors had told me they thought he would be my smallest baby, which I didn't believe since they say that every time, and sure enough he was a big boy! 9 pounds, 2 ounces - exactly the same as Davey. I was really glad he didn't decide to show his brother up, because I don't think I could deliver a 10 pounder. 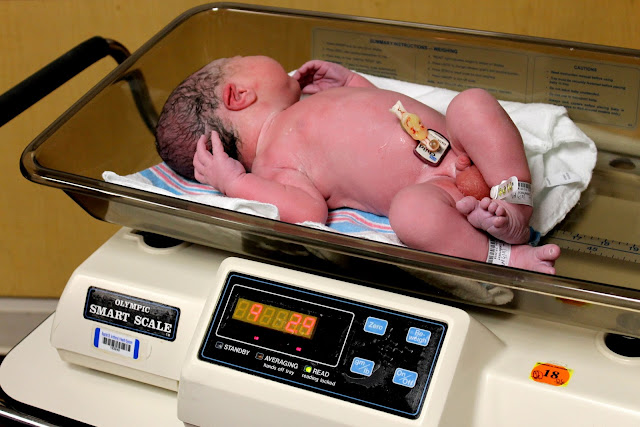 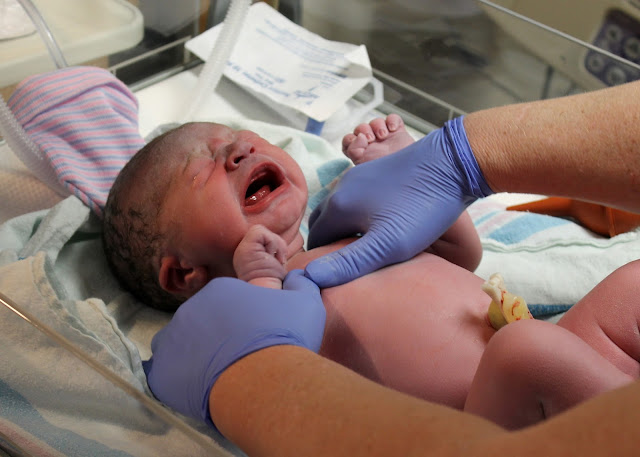 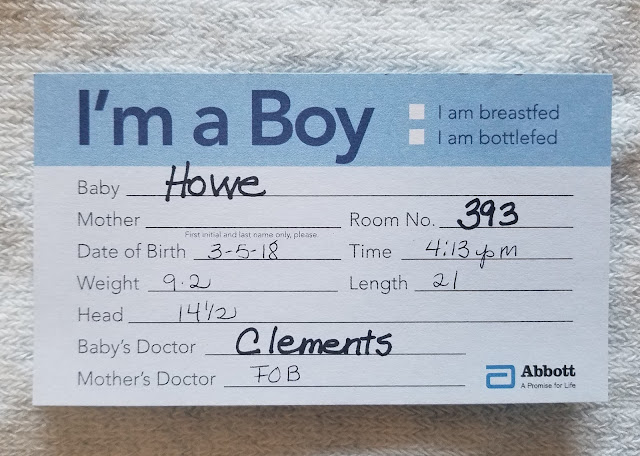 After he was weighed and measured and cleaned up a bit, I got to hold him again. He was so calm and alert and I loved him immediately. 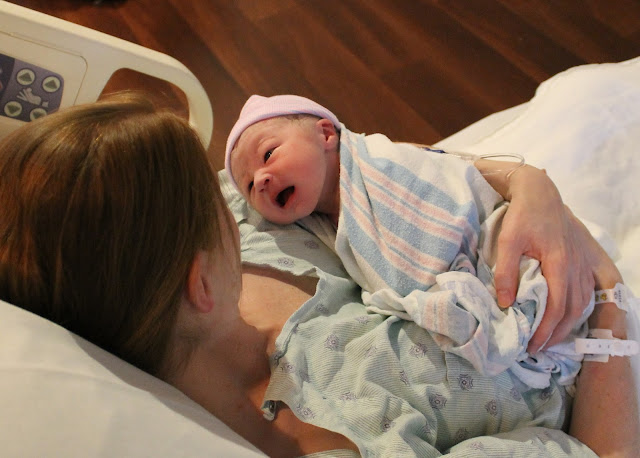 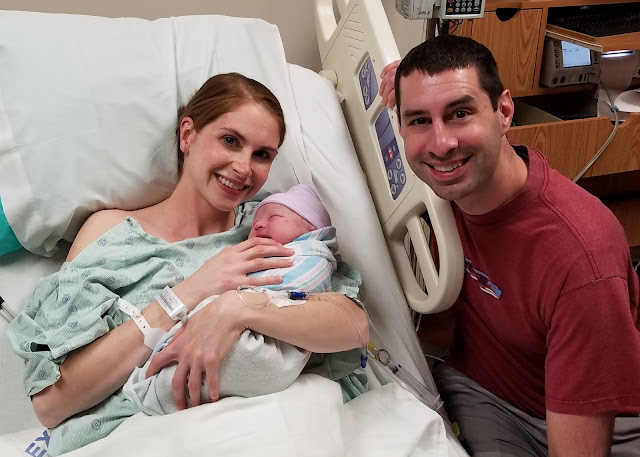 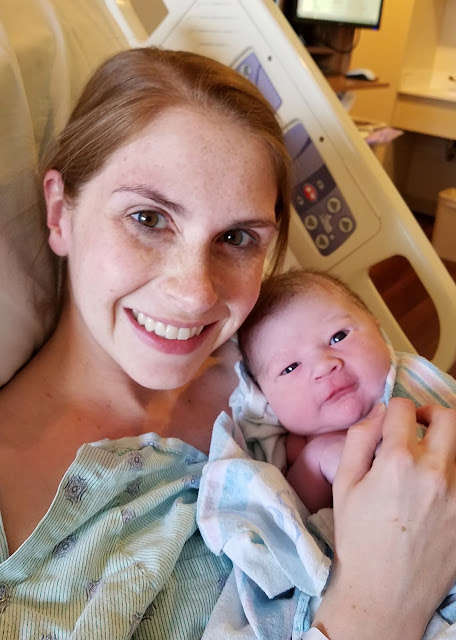 After I nursed him, they took him back to the nursery for some tests and a bath so he would be clean when he met his siblings. I wasn't there, but Dave went along and based on pictures, he did not like bath very much. 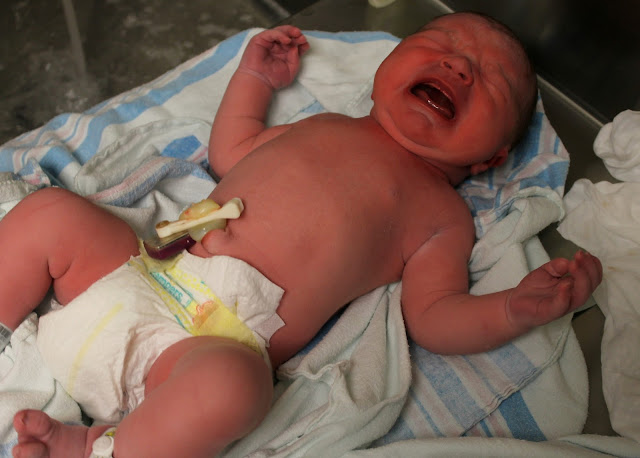 My mom's flight arrived the same day around 3:00 pm. Someone I work with in YW was kind enough to pick her up at the airport and take her to our house so she could relieve the babysitter. She later brought the kids over to meet their new brother. Sophie was very excited and was all over him right away. We weren't sure how Davey would react, but it turns out he was also very excited about the baby and wanted a turn to hold him as well. 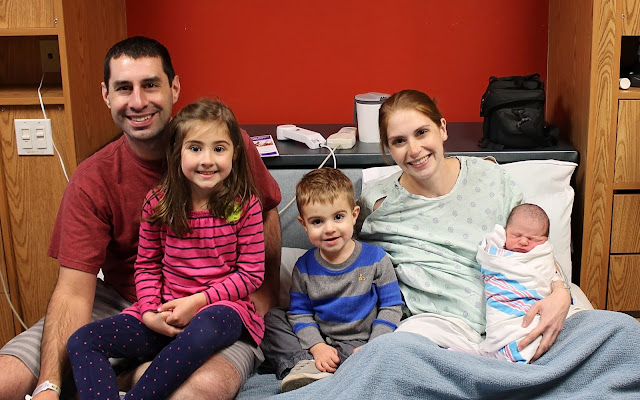 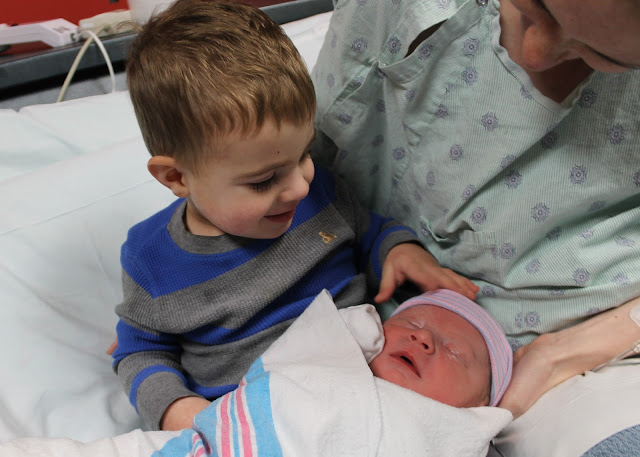 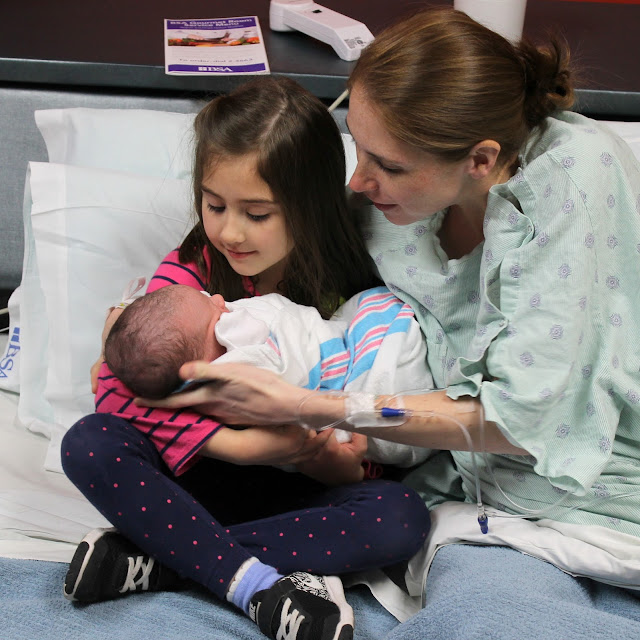 We stayed two nights in the hospital, but Sophie and Davey were able to come back for another visit the next day and Sophie was even able to help feed Charlie a bit. He came out hungry and the nurses had me supplement with formula after every feeding to keep his blood sugar up and his tummy satisfied. In the end we went through 14 bottles in the hospital, which is a crazy amount of food for a newborn! 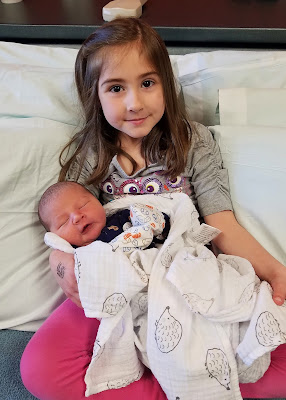 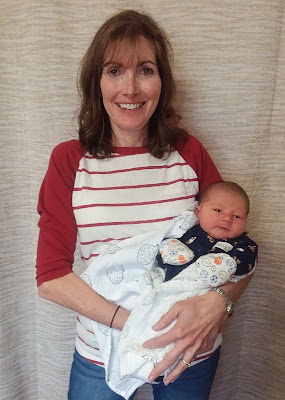 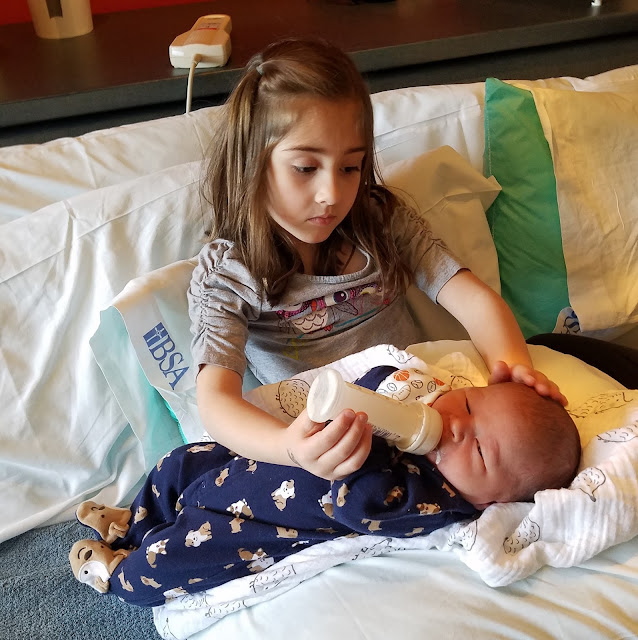 Not knowing how big he would be, I brought a newborn and 3 month outfit to the hospital, and just like Davey, he is skipping the newborn size. 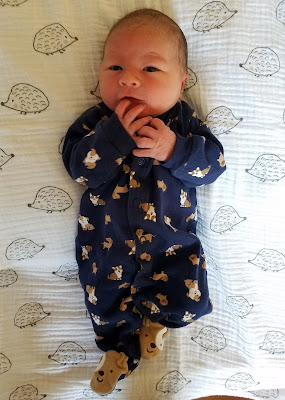 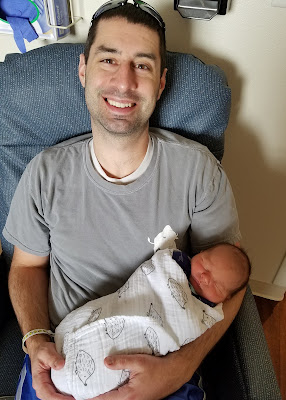 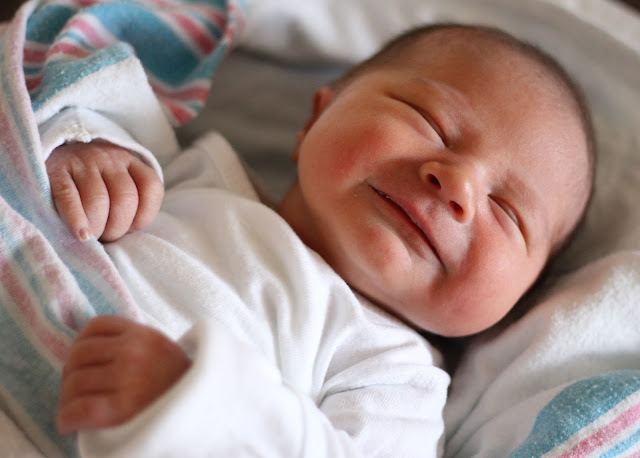 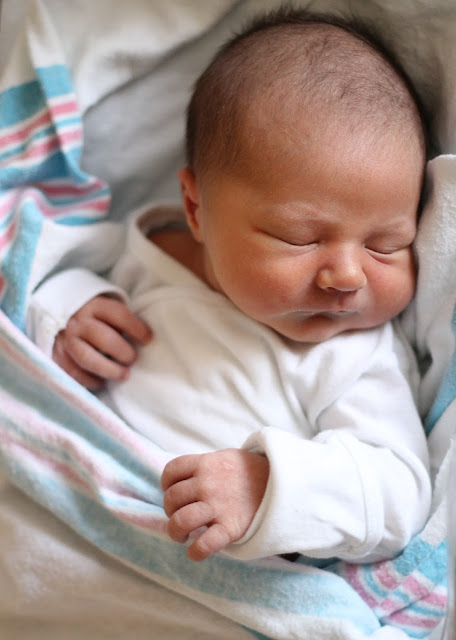 Our stay in the hospital was actually pretty good. The entire floor was so much quieter compared to the hustle and bustle of the Utah hospitals, and we got to stay in the same big room the whole time, instead of moving to another floor after delivery. Our food was good, and the staff took great care of me and baby Charlie. When it was time to leave, he didn't make a fuss about getting in the car seat and was our first baby to not cry all the way home (although he didn't look exactly happy either). Welcome to the family little guy! 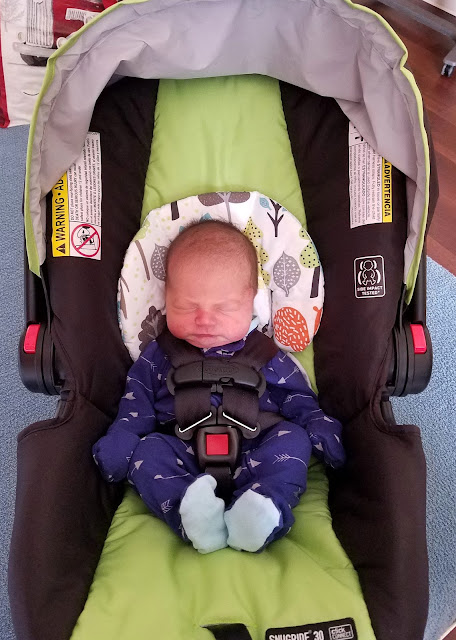 So fun to read. I'm glad you were able to deliver the baby on the very day your mom came into town. Awesome!