We had a fantastic Easter this year! Sophie ate too many sweets and had so much fun with all the festivities, while Davey had no idea what was going on, but loved the excitement and playing with the eggs that kept appearing. It was a wonderful weekend with beautiful weather, great people, and much gratitude for the Savior and his sacrifice.

On Saturday we went to the Draper City egg hunt at Galena park. It was funny because just an hour before the hunt Sophie and I were talking about how she saw Snow White there a couple years ago. She got really excited about who she might see this year, and then thought maybe it would be Moana! I told her maybe, but probably not, and then guess who we saw right as we walked up.... Moana!! It made her day. We took a quick photo and hurried back over to the circle for her age group.

The countdown started and then all the kids made a mad dash for the eggs. I had told her to run for the middle where most of the eggs were, but of course she stopped at the first egg she saw. Silly girl. No parents were allowed in the circle and I was impressed by how well everyone followed the rules. I heard that a hunt in a city a few miles down turned savage with adults talking over and pushing kids out of the way to get the most eggs. What a crazy world. I was glad that she was wearing a rainbow coat, though, so I could keep track of her in the mosh pit and find her afterward. 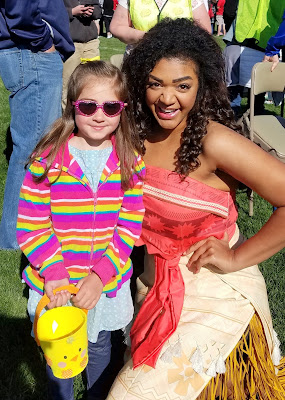 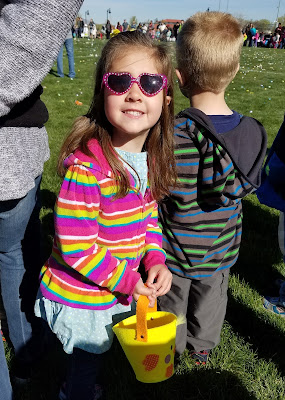 Sophie was thrilled to meet the real Easter Bunny. Davey thought he was being attacked by a monster. 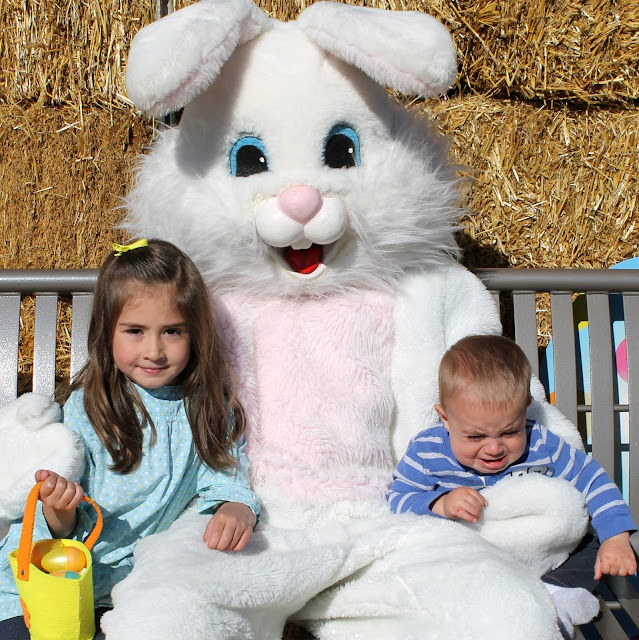 After the hunt we went up to Salt Lake to have lunch with my grandma. We haven't been able to see her for several weeks, and I'm glad we were able to meet up since our days here in Utah are numbered. It will be so sad when we have to leave :( Derek and Faye also joined us, and then came back to our place afterward to dye eggs. 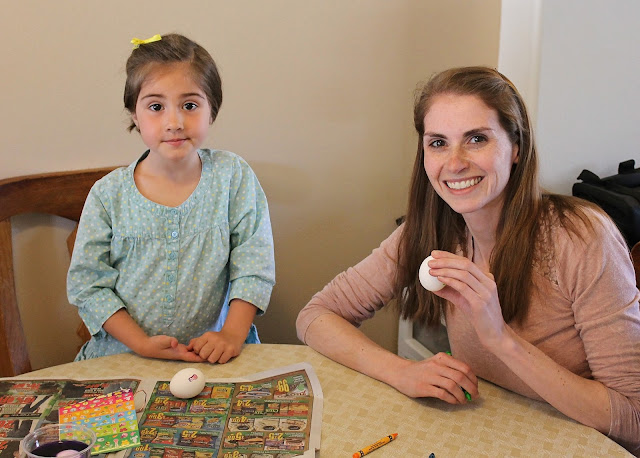 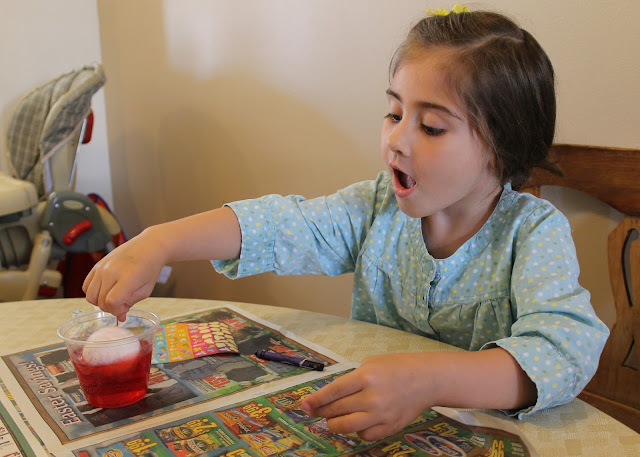 The Easter Bunny stopped by during the night and sure spoiled these kids. They both got a drink bottle, a book, and a treat. Sophie also got a card game, some band-aids, socks, and a little kennel with two kittens. When Soph came down in the morning, she ran over to the basket and immediately loved everything. It may have been an even better reaction than Christmas.

After looking through the goodies, she remembered there were also eggs to find and she quickly gathered them all up. They were filled with M&M chocolate eggs and fruit snacks, and there was one big egg that had a $1 bill inside. Jackpot! Unfortunately while Sophie was enjoying her treats, Davey found the real eggs and cracked one open with his teeth. He then smeared the contents all over our carpet and made a real mess of things. Lucky Dave got to spend Monday with a rug doctor cleaning our carpets. 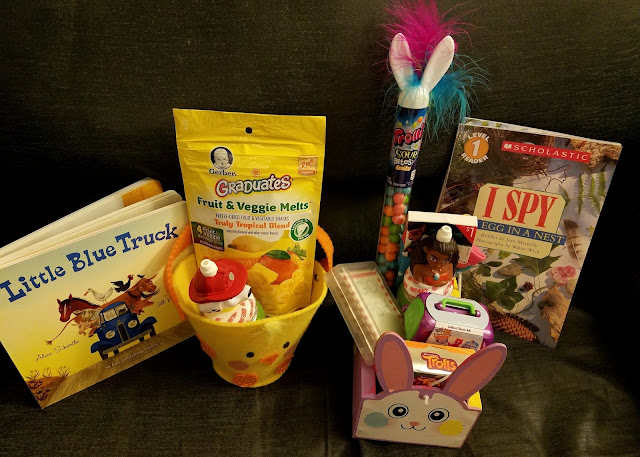 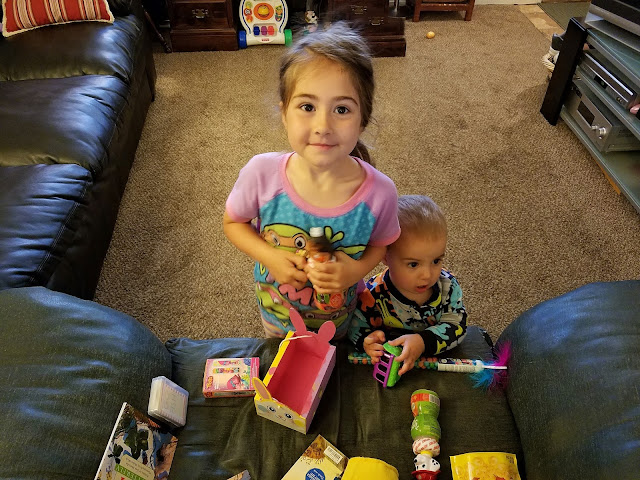 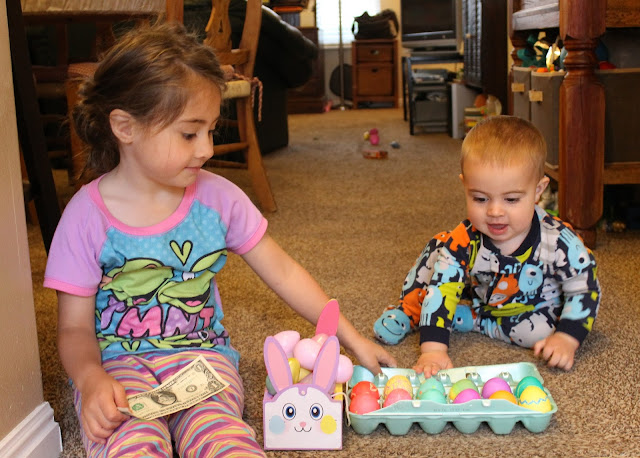 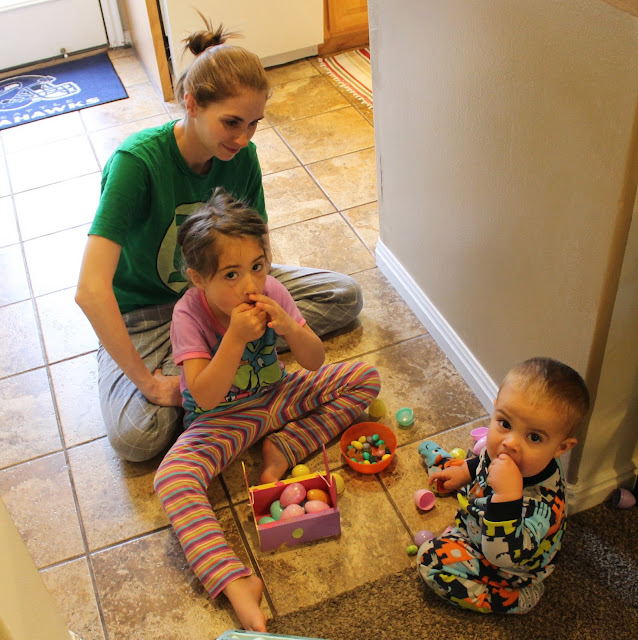 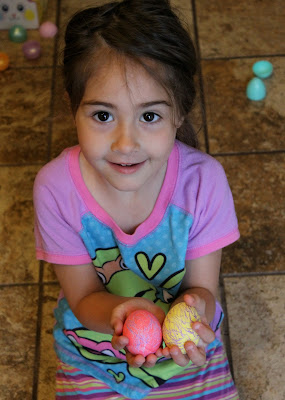 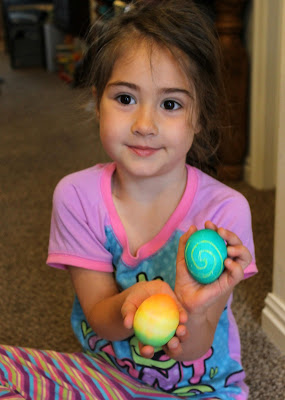 We have afternoon church right now and were able to enjoy our morning without feeling rushed to get out the door. Dave made us some bunny pancakes, the kids had a bubble bath and then we even had enough time to take a quick family picture after lunch before we had to leave. Davey was a bit of a pill at church, but it was a great Sacrament program and the ward choir sang for the first time since we moved in 4 years ago. Sophie also got to say the prayer in Primary. She did ask Dave to stand by her, but did a great job talking into the microphone. 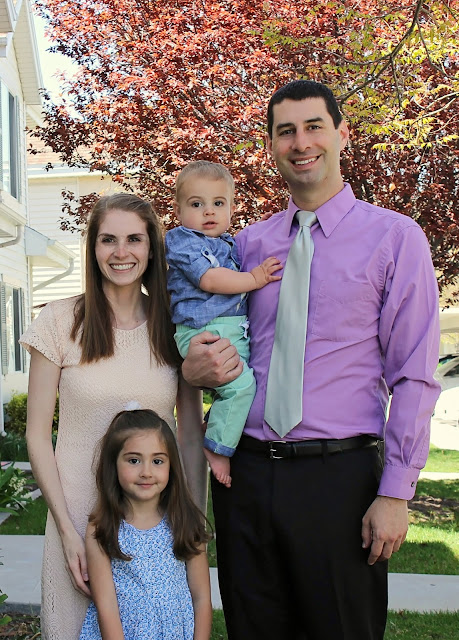 We left a little early from church to head to Provo for an Easter dinner at my aunt's house. My cousin was in town with her two boys, and it was really fun to see her! We only see each other once a year at best, which is too bad because our kids are similar ages and Sophie had a great time playing with Weston. We were also able to see my grandma again, as well as Derek & Faye, my cousin Josh, my Uncle David & Aunt Cynthia, and my cousin's daughter Bethany who is at BYU right now. It was so great to be with family, but sadly, I took only one photo the whole night of Davey stealing an egg that was part of a hunt for the older kids. Sneaky little guy... 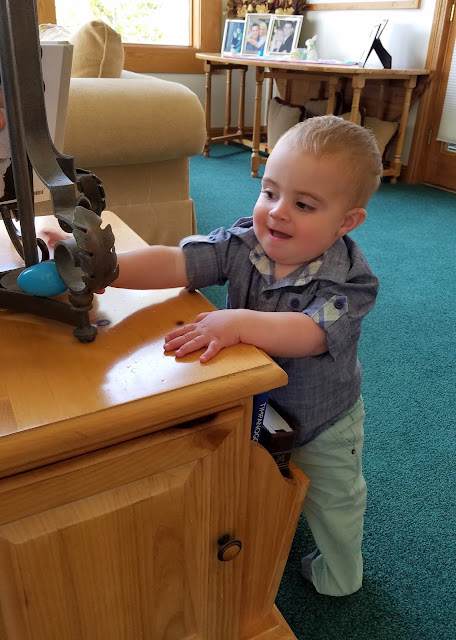