We went up to Park City the first weekend in March to stay with my uncle at his timeshare. My brother and his wife also came up with us so it was a fun group!

On Saturday we took Sophie skiing at the base of the ski lift. She had only been once before and is still in the very early stages of learning, but any practice she can get is good for her! The stretch of snow she was practicing on was narrow and slick, with a metal bar on one side and a drop off on the other so the conditions weren't ideal, but she did pretty good. Hopefully we can get her up one more time this year before we move. After dinner we enjoyed the hot tubs, put the kids to bed, and then played cards.


Video: Sophie skiing for her second time ever 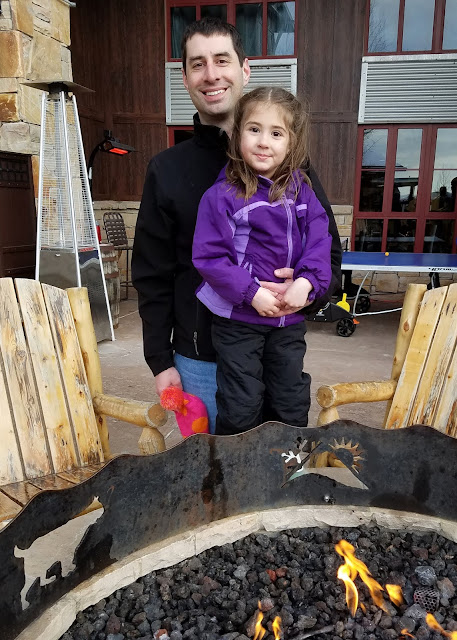 On Sunday, we found a ward to attend and were surprised to find it was a special Sacrament Meeting just for visitors. The Park City ward receives anywhere from 100-1000 visitors each week so they have a dedicated meeting for guests, separate from their own meeting. It was just 45 minutes long, which was perfect for the kids, and then we went back to the condo for lunch. My parents arrived early that afternoon to join the fun. We played more games. went back to the hot tubs, and then had a big family dinner. The weather reports showed snow moving in around 9:00, so we played just a couple more games, and then left shortly after 8:00 to beat the storm.


Playing a game with Uncle Brent and Grandmari 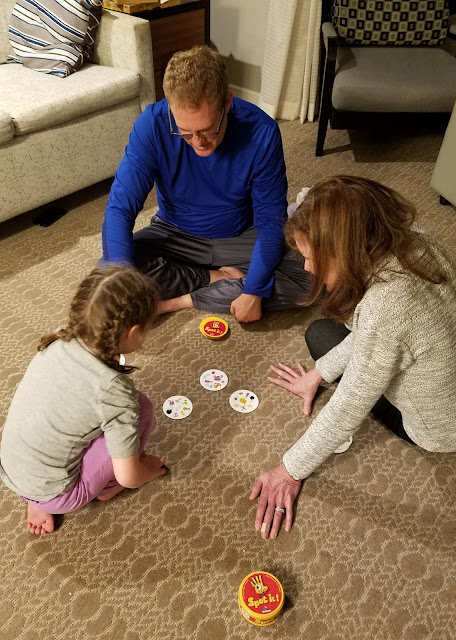 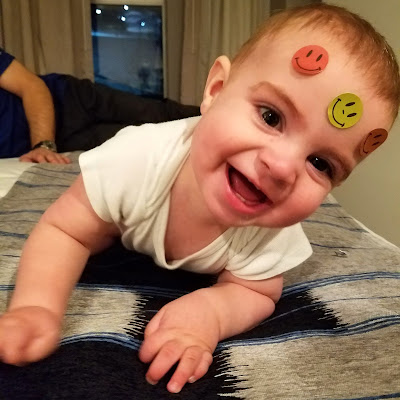 Unfortunately, the reports were wrong. The storm came early than anticipate and snow was coming down fast and hard just as we were leaving. It was also extremely windy, which made visibility really poor. We slowly made our way to the interstate, and luckily traffic was light so it didn't matter it we strayed from our lane because the lines on the road were impossible to see. Once we got on I-80, Google maps told us there was an incident a few miles ahead, but it only estimated a 25 minute delay. We wanted to get home and were a little frustrated with the slow down, but at least the kids were sleeping so it wouldn't matter if we had to sit for a few minutes. Unfortunately, 25 minutes turned into an hour, then two, then three....

It was miserable. We were stopped with hundreds of other travelers while the snow just built up around us. We knew the incident was less than a mile ahead, but there were never any reports on what had actually happened or how long it would take. Since we were in the canyon there was no way to turn away and no way to get off and take an alternate route. Sometimes we would crawl forward a few feet, but it was just cars compressing and then we would stop and sit again. We saw a lot of cars make really really risky/dumb moves trying to use the narrow, snow covered, shoulder to pass traffic and get ahead. I know at least one got stuck and really had to fight to get going again and another ended up off the side in a ditch. So dumb.

It could have been much worse though. It had been 55 and sunny earlier that day and we had considered taking the Focus instead of the Escape, but our stuff fit better in the bigger car so we took it instead. I was so glad that we had 4-wheel drive and weren't in a little sedan! It was tricky driving even in a good car! The kids stirred a few times, but stayed asleep (huge blessing). We also had plenty of gas and didn't have to worry about shutting our car off to save fuel, which was good because ice was building up on our windshield even with the wipers going and the defroster on high. The lack of a bathroom made me a little nervous, but in the end I was fine. It would have been tricky if nature had called because there would have been zero privacy on the side of the road (plus it was a blizzard) and Dave forbid me from even thinking about using the cooler as a travel port-a-potty :)

After 4 hours we eventually started to move and found that the back up was just tons of cars and semis (at least 20) that couldn't make it through the storm and got stuck. It took that long for the tow trucks to pull everyone off to the side to create a path where others could pass through. It was crazy. After we made it, the rest of the drive wasn't too bad and we climbed into our beds sometime after 1:00 am. What a terrible end to an otherwise fun weekend.