This year we had Sophie's first birthday party. In previous years we had a few family members over for cake and presents, but this year she asked to have an actual party with friends, games, prizes, etc...the real deal. I agreed and her top two requests were to to have it be Moana themed and to play pin the tail on the donkey. Easy enough, right?


The invitations I made 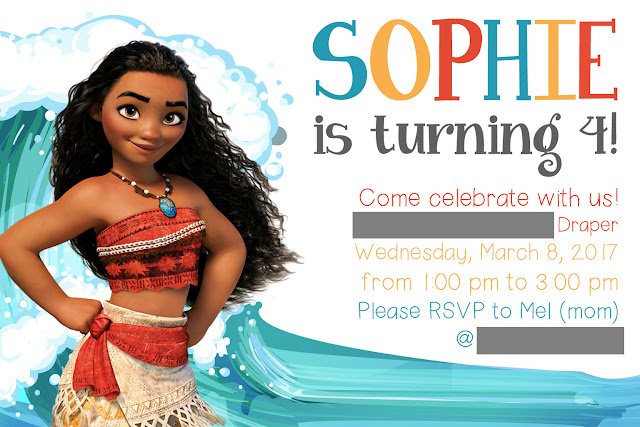 Unfortunately, Moana is still a relatively new movie so there weren't many ideas out on Google or Pintrest yet to help me brainstorm. In the end I  had to do most of the creative thinking on my own and spent way too much time and energy planning this party, but it was fun and she LOVED it so I guess it was worth it. Next birthday is definitely going to be more low key though, like eating cake at a park.

I also had a lot of trouble finding Moana-themed stuff at the store. The stuff online was super expensive, and the party section at Walmart had a single table cloth left. My mom managed to find some cups at a craft store that we used as well, but that was it. For the rest we just did balloons, streamers, and a homemade banner.

I did see on Pintrest the idea to put leaves on the blades of a ceiling fan to make it look like a palm tree. It's hard to see in the picture, but I tried it and it actually turned out pretty cute. 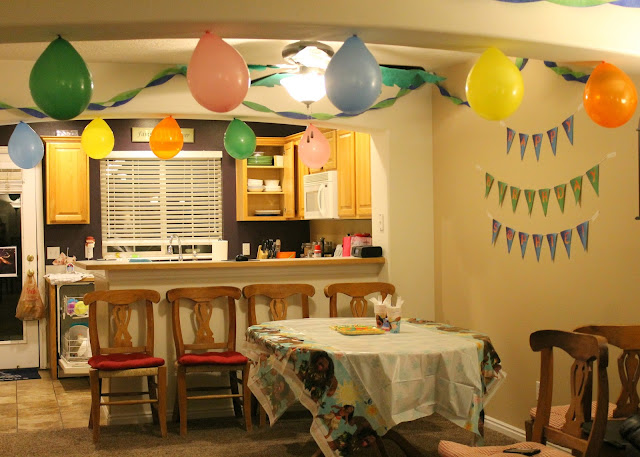 I did all the prep the night before, and then my mom came to help me the day of the party. Dave was supposed to be defending his thesis that day, but it got rescheduled, so he was there to help as well. I was so glad to have them both there because we ended up with 8 kids, and Davey didn't nap that afternoon so I would have had my hands full!


Waiting for the party to start 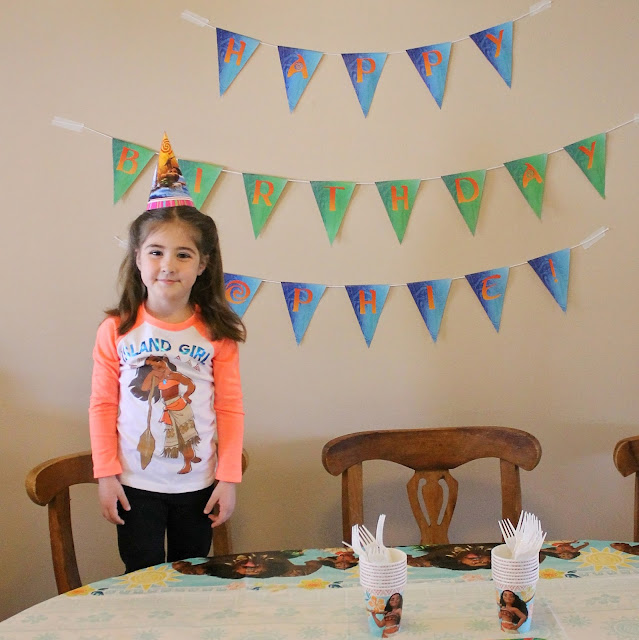 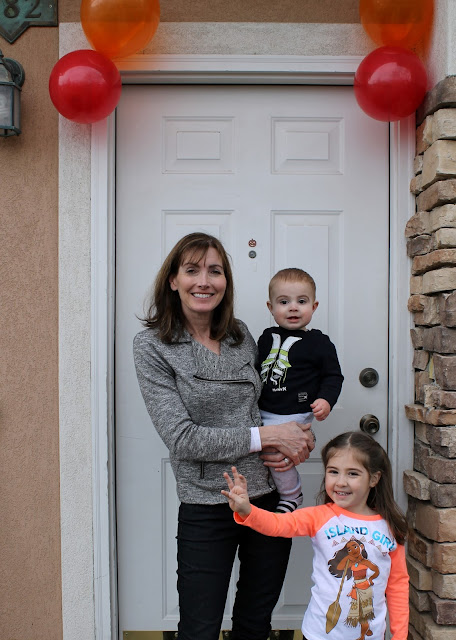 I had planned out a few games to play, and then we ate cake and did presents. After it was all done I just let the kids play until parents came to take them home. There were only a few tears shed (by my own child) and the kids seemed to have a lot of fun, so I'm calling it a success!!


PRIZE BAGS: Each game we played had a little prize they could win (goldfish crackers, fruit snack, etc...) that would then go in their prize bag. I put a different character on each bag so they could easily identify which one was theirs. By the end of the party each guest had some fun treats to take home! 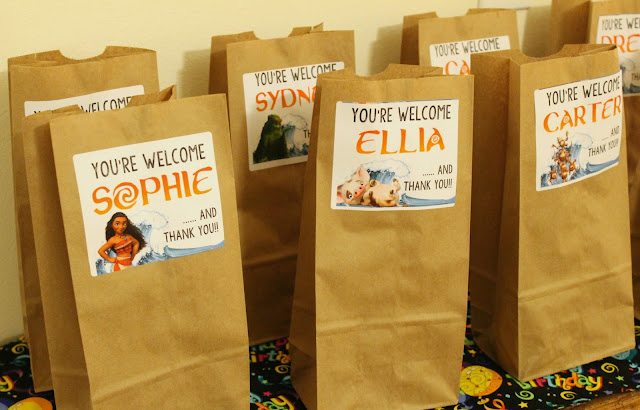 FISHING GAME: This is a classic that all little kids love. We moved our baby gate on the stairs up higher, draped a beach towel over, and then Dave hid behind it to attach bags of goldfish to the clip. They had such a fun time with this, and we had some extra treats on hand for the kids who wanted to do it a second time. They really had no idea there was a person behind there until the end when the towel slipped and someone saw his hand. 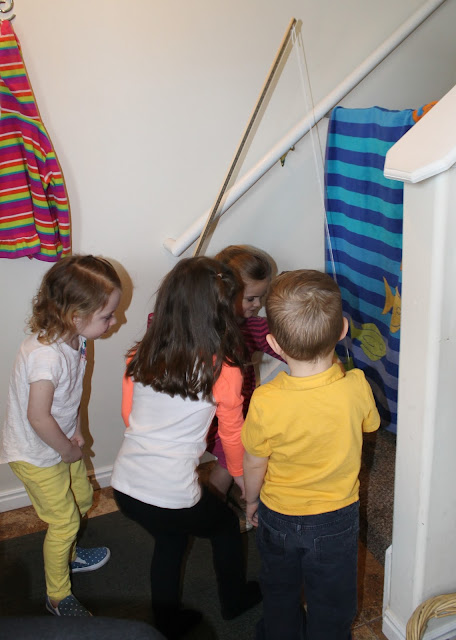 LIMBO: Our limbo had no real rules, which made it more fun. We put on some music from the movie and kept lowering the bar while they crawled back and forth as fast as they could. 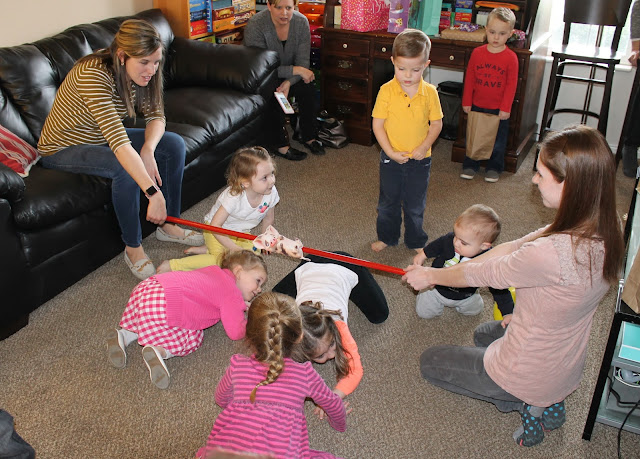 WARMER/COLDER FIND MAUI'S HOOK: I forgot to take a picture of this game. The kids took turns hiding a treat with a picture of Maui's hook on it, while someone was out of the room. They would then give clues to that person to help them find the hook by saying "warmer" when they were close, and "colder" when they got farther away. We had them go in teams, since the concept was a little tricky for some kids to understand. After they found the hook and treat, it went in their prize bag!

KAKAMORA BOWLING: the Kakamora are little pirates dressed in coconut armor that attack Moana and Maui. I saw an idea online where someone made palm trees out of 2-liter bottles and then went bowling with a coconut painted like a Kakamora, but I thought it would be more fun to actually bowl down the Kakamora! I printed out pictures of their faces, taped them to brown lunch sacks, and then put a roll of toilet paper inside each one to make them more stable. Dave bought a coconut at the grocery store and it worked great! I let them all have two rolls to try and knock down as many as they could, and then at the end we let them all have another turn if they wanted to try again. 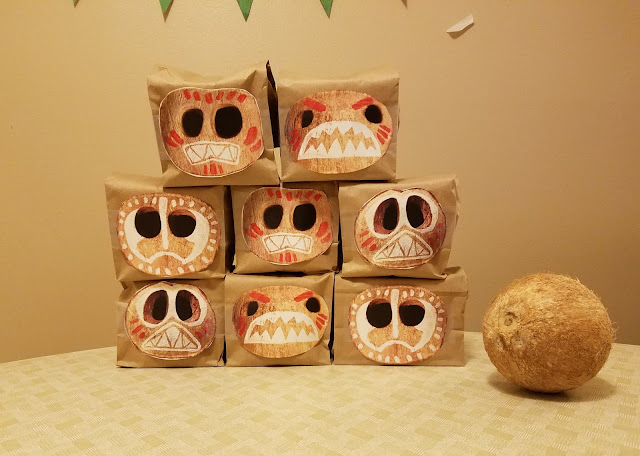 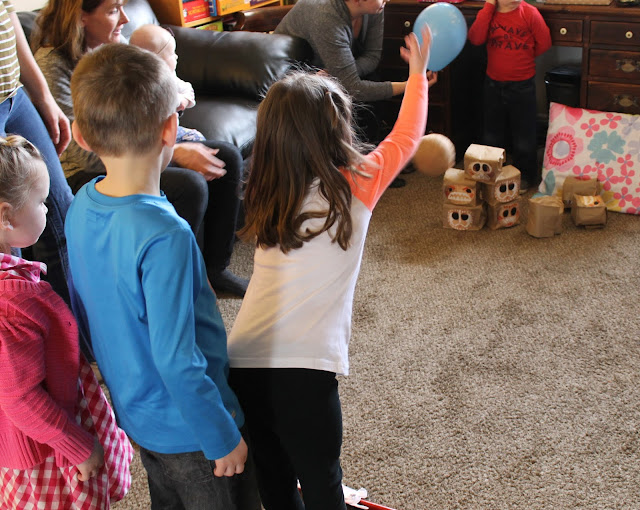 TAMATOA TARGET PRACTICE: in the movie Moana and Maui have to get past a giant crab named Tamatoa. I printed out a picture and was going to just have the kids throw things at him, but then I randomly found these chicken flingers in the dollar section at Target and thought this would be way more fun, especially since they look like Hei Hei from the movie. They did have a great time with this activity, and got to keep the chicken afterward to take home! 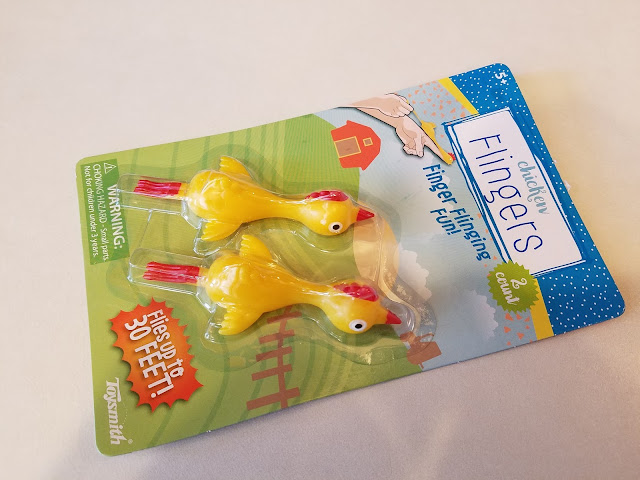 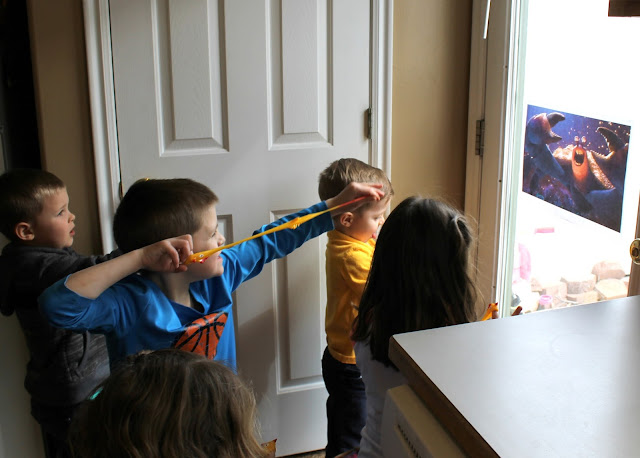 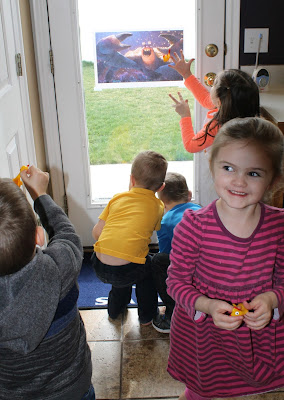 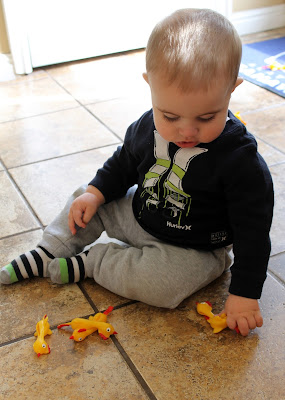 TE KA VOLCANOES: The final challenge for Moana is to confront a lava demon named Te Ka. The night before I filled a bunch of mini water bottles with 2 parts vinegar, 1 part water, and a drop of dish soap (this combination give a slower, longer reaction than just straight vinegar). I put each bottle in a pan and let the kids choose a color for their lava (food coloring), and then gave them some baking soda to scoop in. Eruption time!! 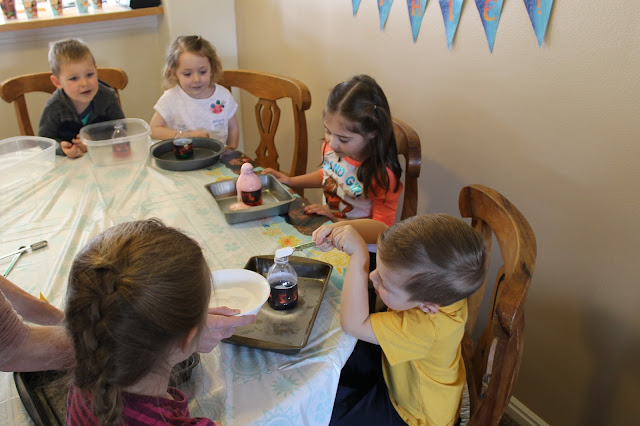 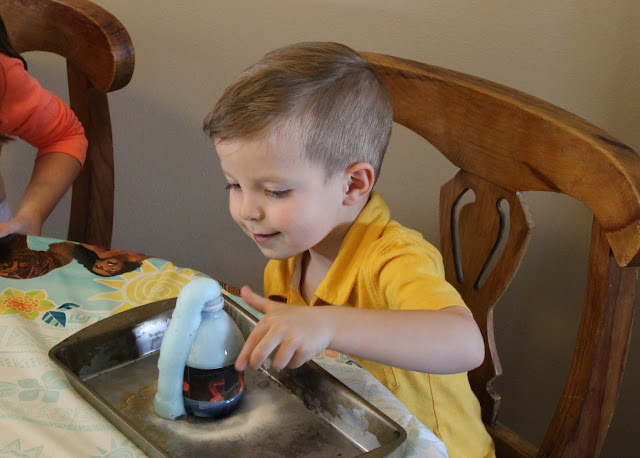 PIN THE HEART ON TE FITI: This was our final game. Sophie had specifically asked to play pin the tail on the donkey at her party, so we put a Moana twist on it and had them try to tape the "heart" stone on a picture of Te Fiti. She placed hers perfectly in the center, so I suspect there may have been some peeking :) 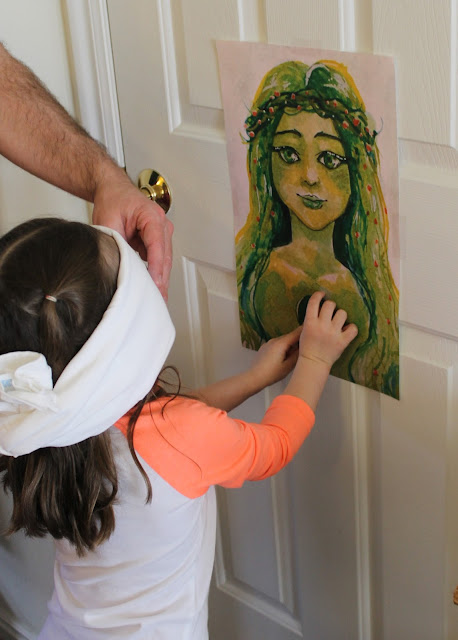 I was worried that maybe I had over planned, but we got through all the games in a little over an hour. To help with transitions, I had queued up several songs from the movie on my computer. I would play them between the games so they would have something to watch while I set up the next activity. As you can see, it drew them right in and worked like a charm! 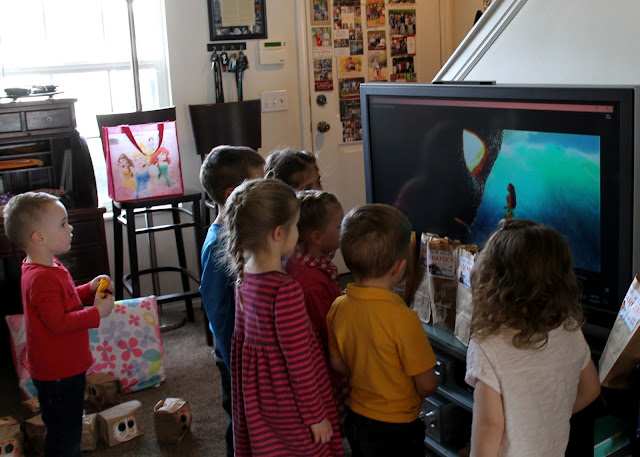 I am not a master baker or decorator, so we just frosted a regular cake blue and put a Moana toy on top, which looked great and was a fun souvenir for her to keep for later! 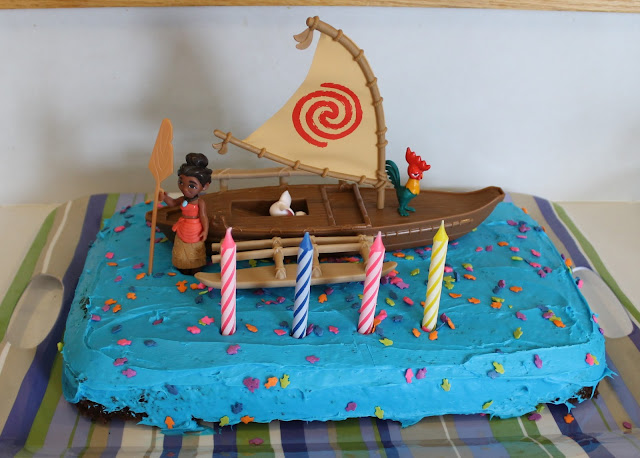 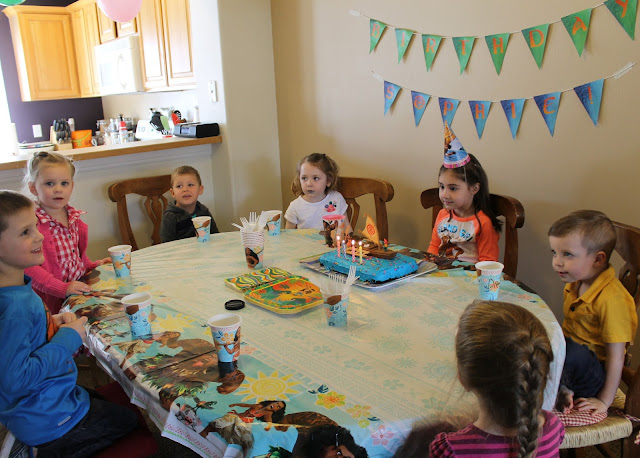 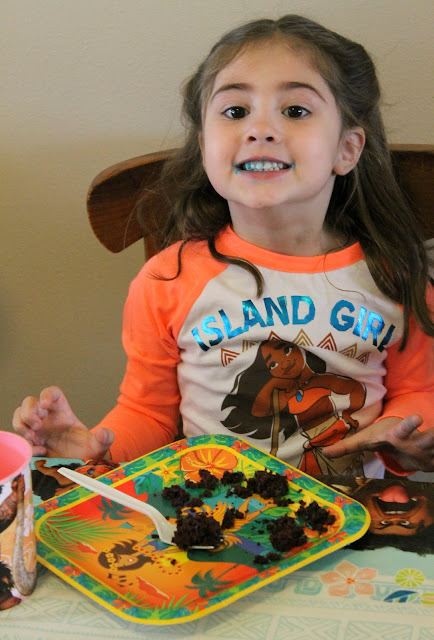 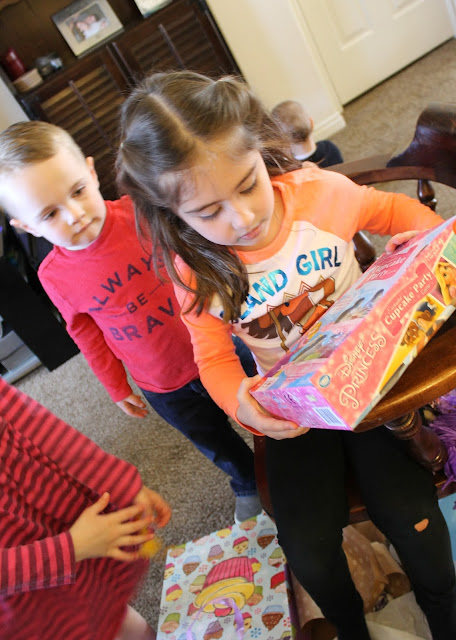 The girls immediately started playing with a princess set she received as a gift, while the boys got out our box of cars. Davey seemed to know which group he belonged in. 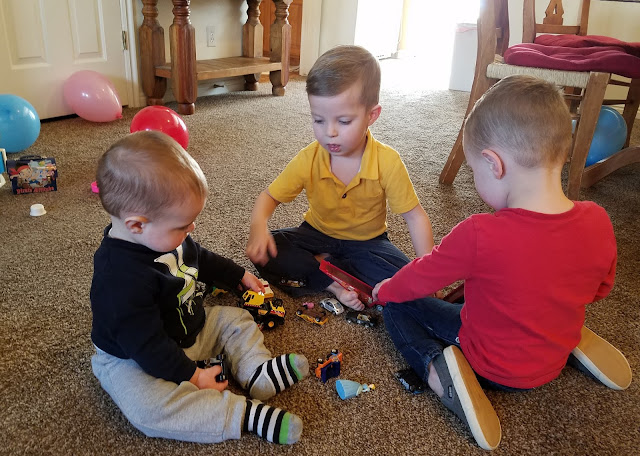 And one of Sophie's friends who couldn't be there was so nice to give her this Moana dress. She loves it and I think I know what she will be wearing for Halloween now! 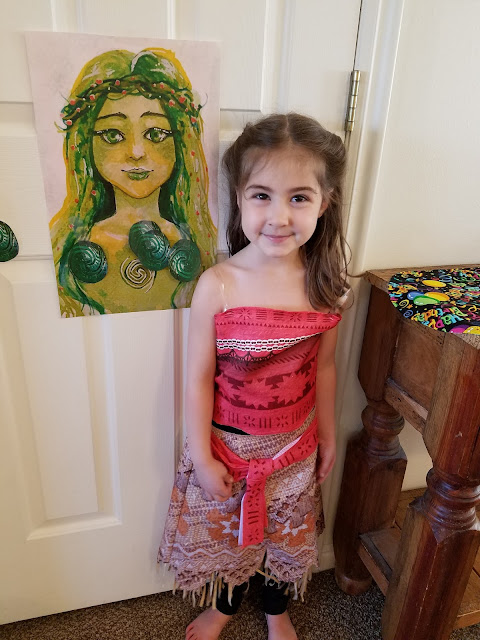 Labels: Birthday, Grandmari, Milestone, My attempt to do something crafty, Party, Sophie

Wow, your party was awesome. I loved the games, the decorations, and your cute cake. I remember being so excited to plan Holly's 5th birthday party (which was the first one she had with friends invited). Happy birthday Sophie! Congrats to your husband almost being done with school. Where are you off to next?

It turned out GREAT!! Such cute and fun ideas!
\