Going to pick a pumpkin is one of our favorite fall activities and I was starting to feel anxious that we hadn't been able to get out to a farm yet this year. Halloween is still more than a week away, but the weather is starting to get colder, and there's rain in the forecast a few days from now, and I kept seeing pictures of everyone having fun and I decided that we needed our pumpkin NOW, so we went last night. For the past couple years we've visited a farm out in Riverton that had good pumpkins and some fun activities, but this year I saw an ad for a place that also looked fun and was only 5 minutes from us, so we decided to give it a try. It was a funny little operation, and we actually drove past it twice by accident before ending up in the right place. I wouldn't call it a pumpkin patch or a farm, but it was perfect for us and Sophie had a blast.

Instead of getting your pumpkin from the field, they just had three big greenhouse  tents with piles of pumpkins, sorted by type and size. The tents had music and decorations, so we loaded the kids in a wagon and took a little walk around. I really wanted to get a cute picture of the kids together, but Davey wasn't feeling great and after about 2 minutes, he had no smiles left. Poor baby :(


Heading out - this was his happiest moment of the night 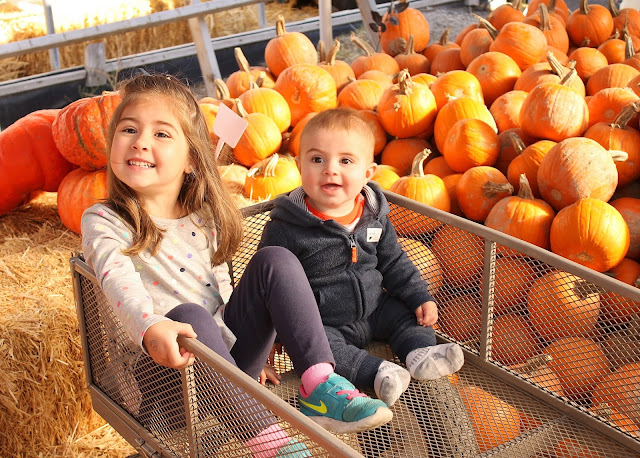 Attempt at a cute photo. I am learning how much harder it is to get a picture with two kids smiling, compared to when it was just Sophie. I have no idea how people with three, four, or more kids ever get a decent picture. 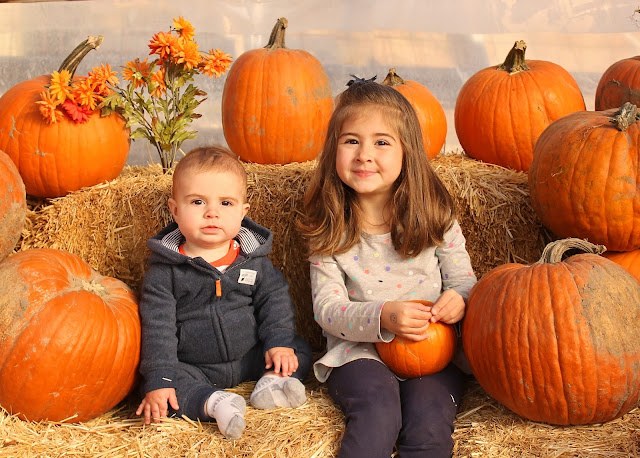 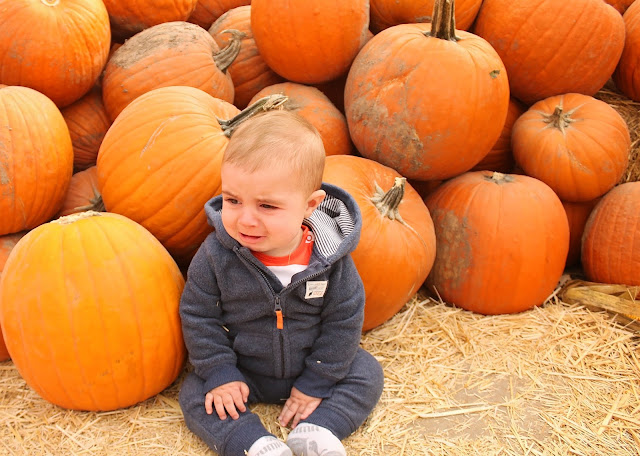 Just outside the pumpkin tents were a few inflatables and a corn pit. We were the only ones there for most of time and Sophie absolutely LOVED playing in all the corn. This was her favorite activity at the other farm, and there she was always vying for space and getting pushed around by other kids. This night, however, she was was able to roll round, jump off the hay bales, have us bury her, try to bury her brother, and basically go crazy without any consequences. Luckily sitting in the corn pit also seemed to chill Davey out a bit and we didn't have to cut our night short. He didn't try and eat any of it though, so that's how I knew he was feeling crummy. 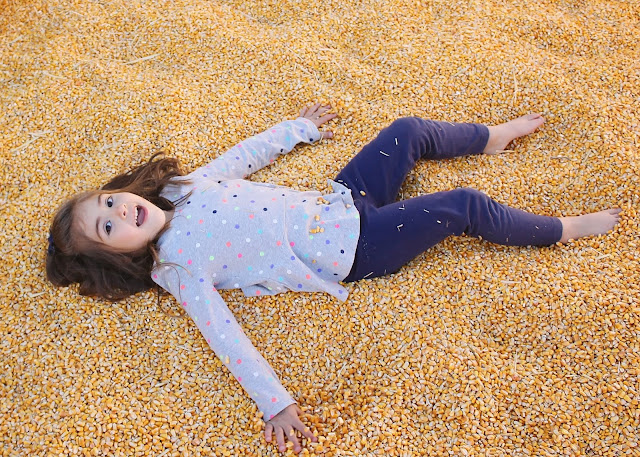 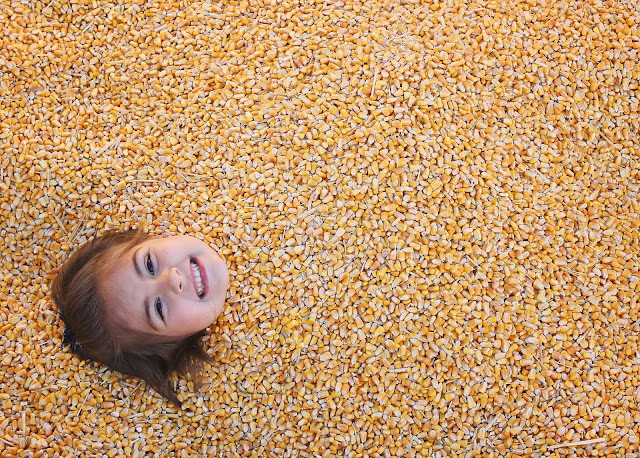 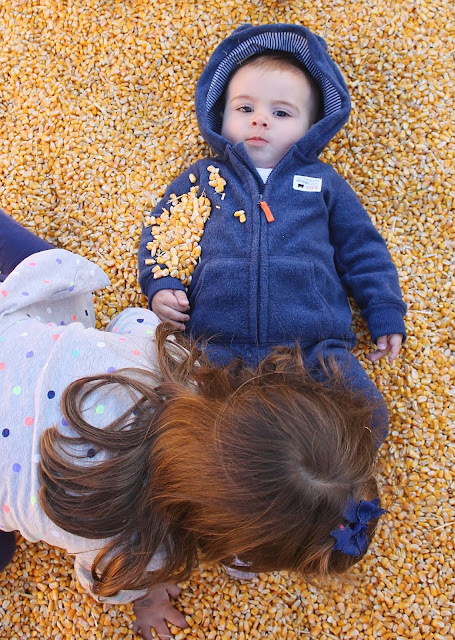 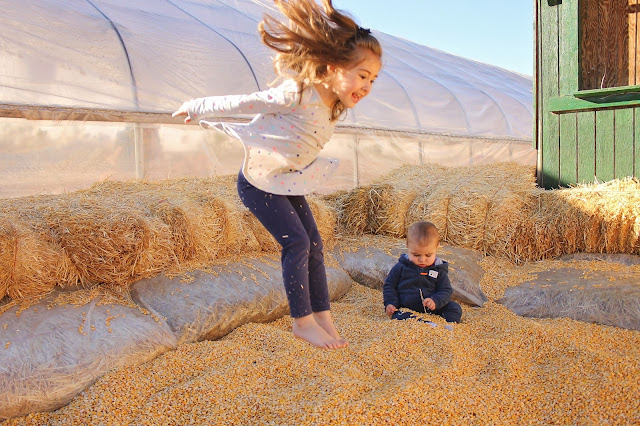 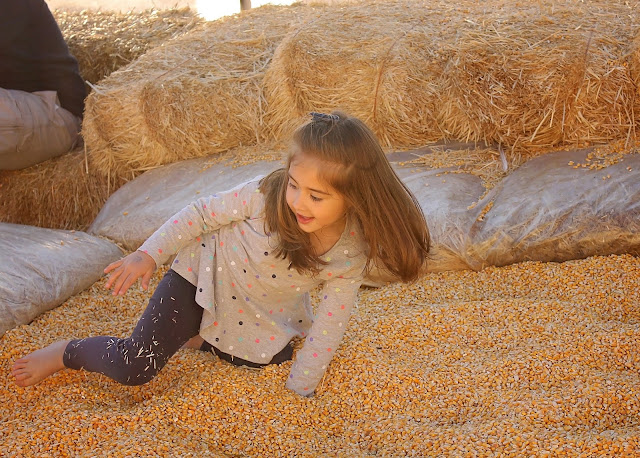 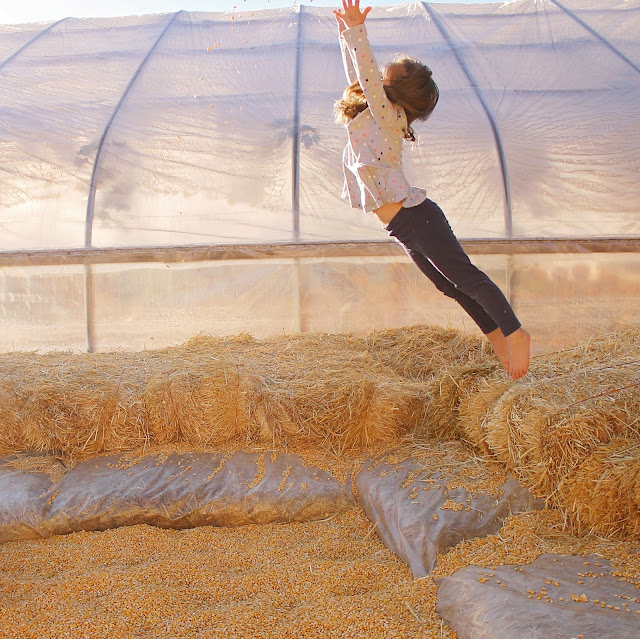 After playing, we went and picked out a pumpkin to take home. At the check out they had some churros that smelled too delicious not to buy one, and we also let Sophie choose a honey straw to take home. Near the exit, there was a skeleton door bell that I sent Sophie over to try. A little snake pops out to scare you when you press the button. We took a video afterward, so naturally her reaction was only a fraction of the first time, but it's still cute to see her jump a little and then be excited to do it again. 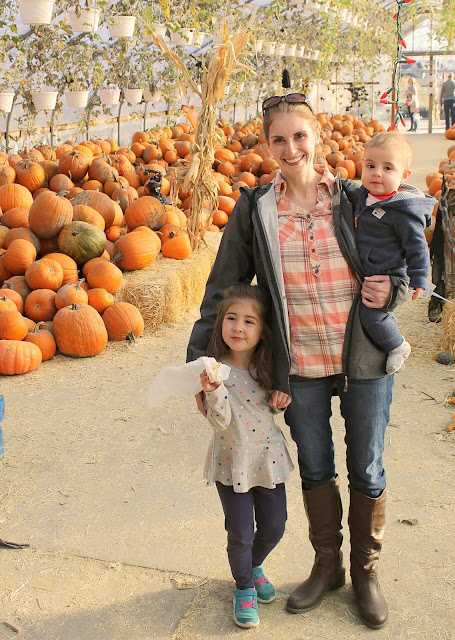 This is the pumpkin I picked out 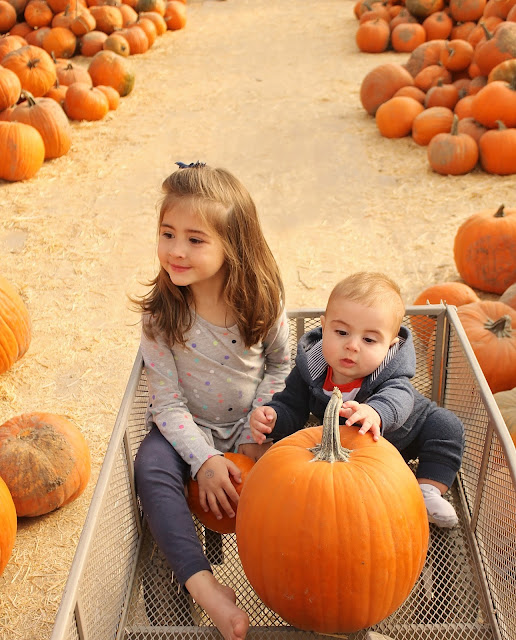 Purchasing a pumpkin also let you go through the corn maze down the street. The Curiosity Museum has a little hedge maze that Sophie loves, so she was excited to try this "big" maze. At first it was more of a path... there weren't any forks where you had to make a choice, so we just wandered along. Eventually we came to a "T" and we let Sophie decide which way to go. She was so excited to lead us through, and after a few dead ends, we found our way out - hooray! 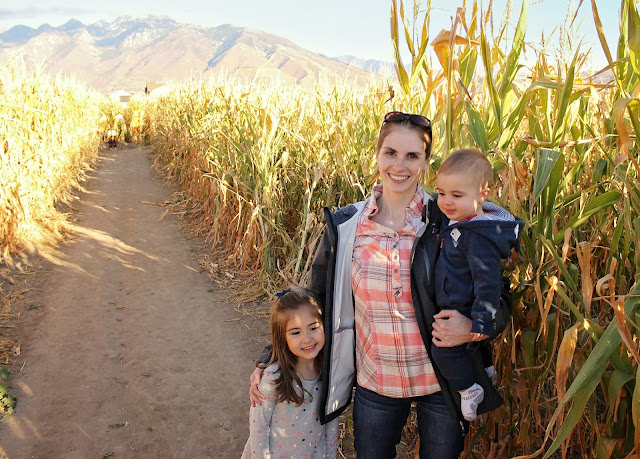 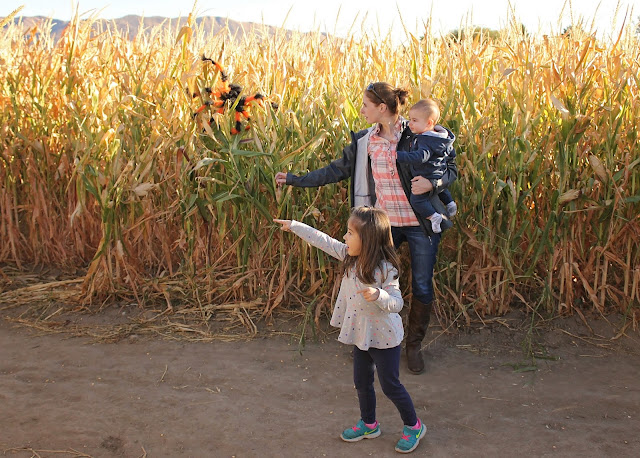 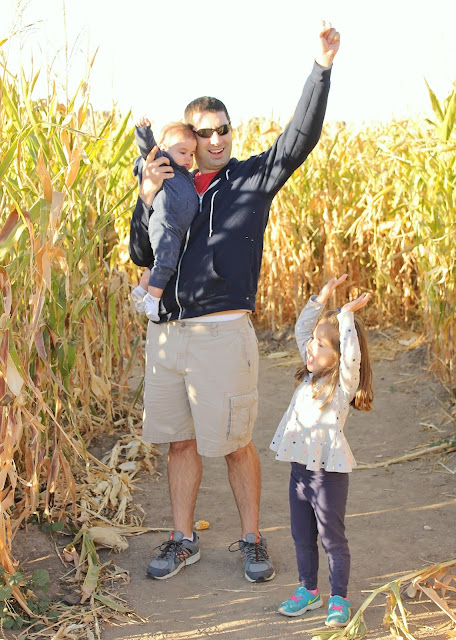 I love all the fun pumpkin patch pictures that you took. The corn pit looked very exciting. I hope you have a great Halloween.