Around three months Davey was really sleeping well. He was taking good naps, and was regularly staying down for 7-8 hour stretches at night, waking for only one, sometimes two feedings.  Then in July, just a couple days before he hit the four month mark, things took a turn for the worse and my dream child turned into a monster. He was unable to nap for more than 20 minutes and was waking 4-5 times at night, and every time he woke up it was with a blood curdling scream. He was always tired, which meant he was often grumpy, and yet he just wouldn't sleep. I was getting exhausted and had to resist the impulse to put him in a closet and just let him scream. After two weeks of fighting the beast, I finally asked Google "why is my baby not sleeping anymore?!"

I was surprised to see it is a common problem for this age, and I started to do some research on the "four month sleep regression." I think Sophie just always slept bad, so I never really noticed a "regression," but for him the change was drastic and I needed help. There are a million baby sleep websites out there and I don't take a lot of stock in what they have to say, but most seemed to agree that this is the age when a baby's brain "wakes up." Everything is interesting and distracting - their hands, the noises, the lights, the blankets. Rolling is super fun. Mom is there, and then suddenly she isn't - panic!! Bouncing, rocking, patting and swaying just don't have the same effect. REM cycles begin and they have to make it through that lighter stage before falling into the deep sleep of death every time they go down. It sucks, but it's all part growing up. 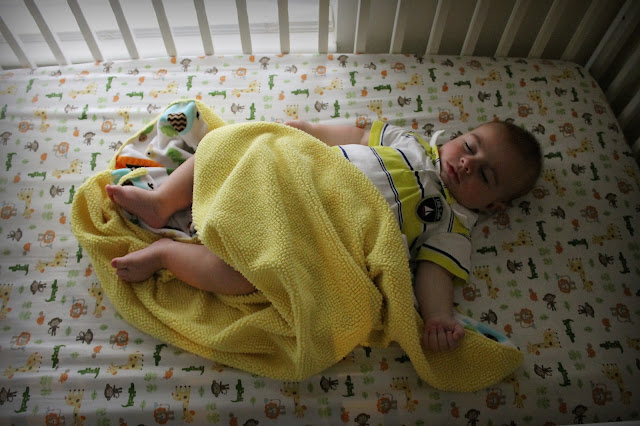 Armed with this knowledge. we started making adjustments that very same day. The biggest change was putting him down to sleep awake so he could start learning how to self sooth and fall asleep on his own. We stopped swaddling him, and having his arms free to play with blankets and suck on his fingers actually really helped. And instead of just letting him fall asleep whenever he felt like it, we put him on more or less of a schedule and tried to put him down within an hour of the "schedule" for naps and bed. We started seeing changes almost immediately and after a few weeks I'm happy to report he is doing awesome!!

Bedtime has moved from 10:30 to 7:30 and it's so amazing to have our evenings back. We can also just drop him in his crib for naps and bed, kiss his head, and 90% of the time he will fall asleep within 5 minutes. He is taking three, 1-2 hour naps each day, is no longer waking up terrified, and best of all has turned back into a happy baby now that he's getting the sleep he needs. Our only struggle now is nights. They are much better, but we're still not quite there. Sometimes he'll go eight hours in one stretch, and sometimes he'll be up every two hours like clockwork (it really is impressive how regular it is). I think he's still a little young to start official sleep training, plus he shares a room with Sophie and I'm not ready to ruin her sleep in an attempt to fix his, but I hope the progress we've made now is a good sign for the future. I guess I need to cherish the midnight feedings and snuggles, because I sincerely hope their days are numbered.

My happy boy! In fact he is often so busy smiling in the morning that he doesn't want to be bothered with eating, which really makes things a bit uncomfortable for me 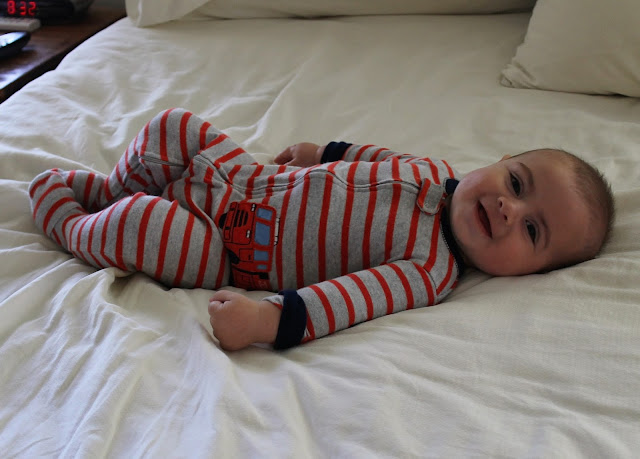 One a side note, I find it pretty funny that my 4 month old baby, who can't even roll, now fits size 12 month jammies, which have rubber feet because some babies this size can walk (Sophie could) 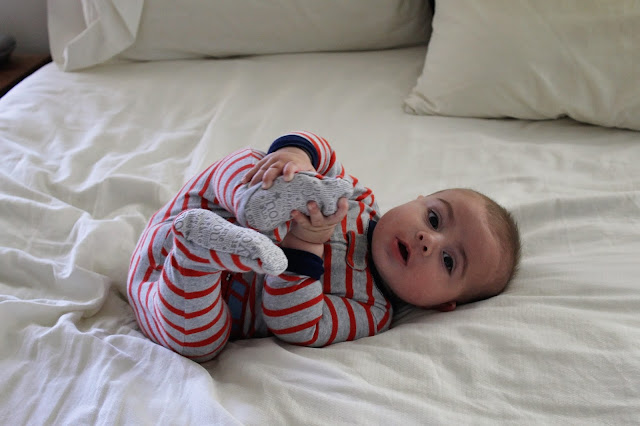 Ah! Weston did this. And Logan turns 4 months next week. I'm not super excited about it. I hope your nights even out soon. Sleep training with a sibling would be hard.

I haven't seen many baby pictures of dad, but this is how I would picture him as a baby. He's got the dark Wilcox skin!