Hooray for the kindness of strangers!

On Friday morning I put Sophie in the car and we started our drive down to Orem for work. We entered the construction zone at the point of the mountain, and as we drove up the hill, I suddenly saw an object about the size of a large can bouncing around in the road.  I was headed straight for us, but I had cars to my right, left, and right behind me so braking or swerving to avoid it was not an option. We made impact and my dashboard immediately started blinking a tire pressure warning.

I looked for a place to pull over, but there is no shoulder throughout the construction zone so we had to keep going. There are a few emergency pull over spaces, but every one we passed already had a car in it (other victims?) so I was just praying we could make it to the exit. We were able to exit and I pulled over on a side street to inspect the damage. 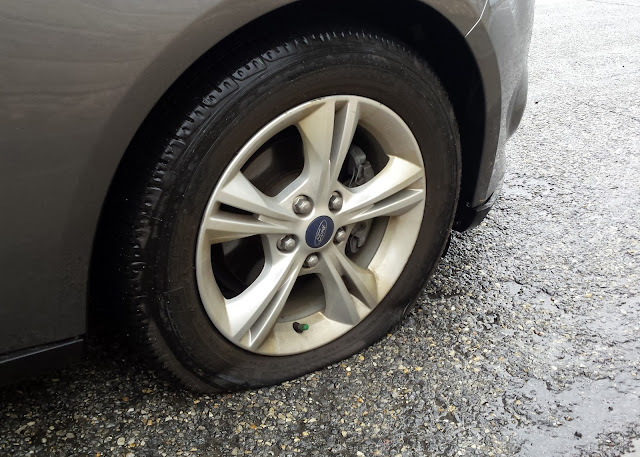 I called Dave, who was out of town, to see if he could find me some help but we couldn't think of anyone who could change a tire and would be available in the middle of the day. I got the spare tire and the jack out of the trunk and was sitting on the side of the road, when someone pulled over to help. He was on his way into work, and got down on the wet ground in his uniform and put on the spare for us. I was so grateful for his help and don't know what we would have done otherwise! I tried to pay him, but he wouldn't accept my money and said that was how his mom had raised him. 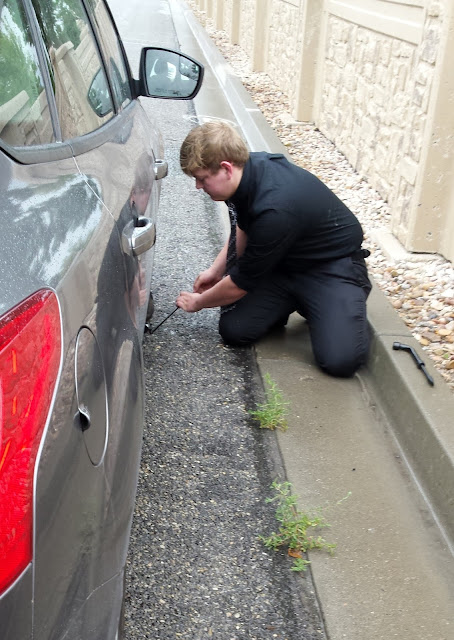 We drove on our spare to the Costco tire center and got there right as they were opening. The mechanic said the side wall of our tire was damaged beyond repair, and that we would need a replacement. The entire process took a couple hours, but there are worse places to be stuck than Costco. Sophie and I did lots of walking around and enjoyed a frozen yogurt while we waited. Once the car was fixed, I called work to tell them we were on our way again and they told me to go home (thank you Kris!) and I was more than happy to comply. What a way to start a weekend!
Posted by Melanie Howe

Once Scott and I were visiting DC from Pittsburgh where we lived and we hit a curb and our tire went flat just like yours. We had never changed a tire and just then a nice young man walked by and offered to change ours for us. I am so thankful for his kindness. I'm glad a kind person stopped to help you too.