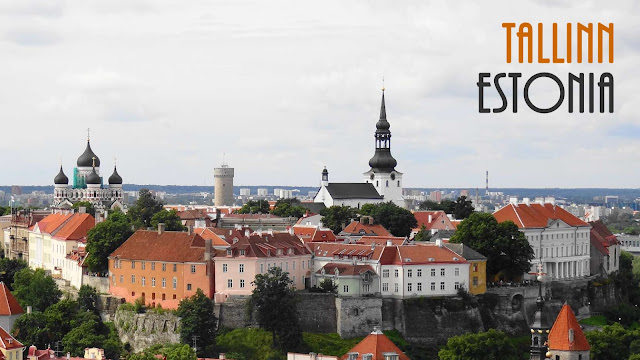 Our second stop was Estonia, a small country with just over a million people. Estonia has a long history of occupation by other nations, most recently Russia, but has been independent for the last 20 years and seems to be doing well. We visited the capital city of Tallinn, whose Old Town is one of the best preserved medieval cities in Europe.

A wall and series of towers was built around the city of Tallinn starting in the 1200s. Over the next few centuries these fortifications were enlarged and strengthened and many of the towers, gates and sections of the wall are still intact today. This "Old Town" is now a very charming place to visit.


We entered Old Town through the Great Costal Gate, which is connected to the Fat Margaret tower on the left. Sadly I didn't take a picture of Fat Margaret, a tower that is as wide as it is tall. 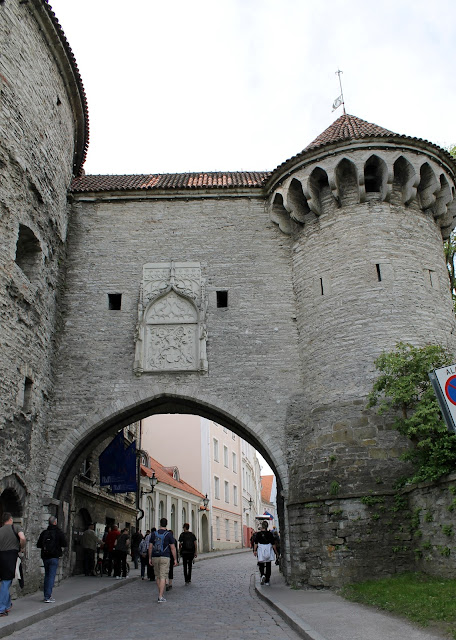 Our first stop was St. Olav's church, which was at one point the tallest building in the world. It was originally built in the 12 century, but it has been rebuilt several times due to damage from lightning strikes and war. 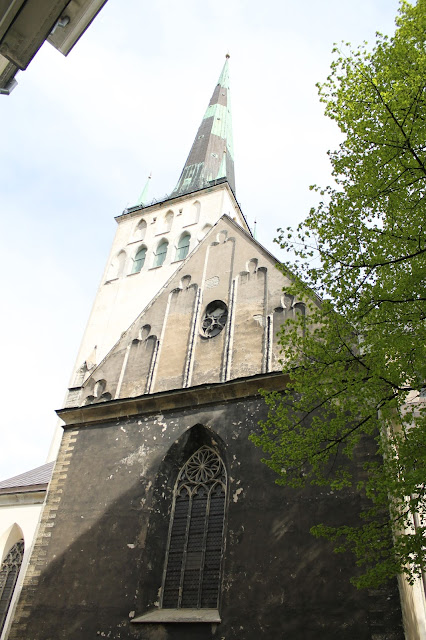 St. Olav's is a Lutheran church, and so the interior is mostly white and plainly decorated. 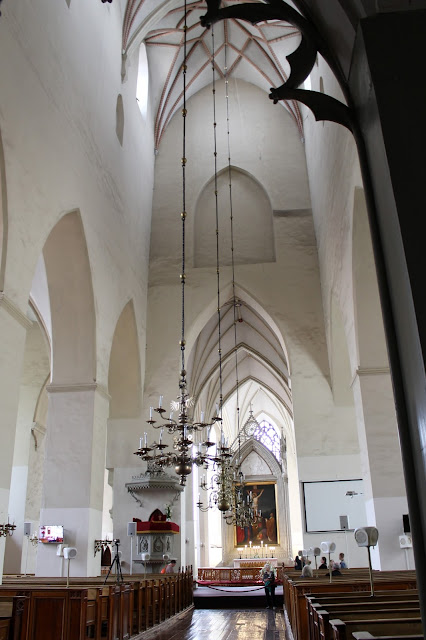 We climbed up the tower to a viewpoint. The stairs to the tower are very narrow and steep and must be shared by those going up and down. I was glad we were one of the first groups to go up, because it was pretty difficult to pass people going the other direction when we were on our way back down. 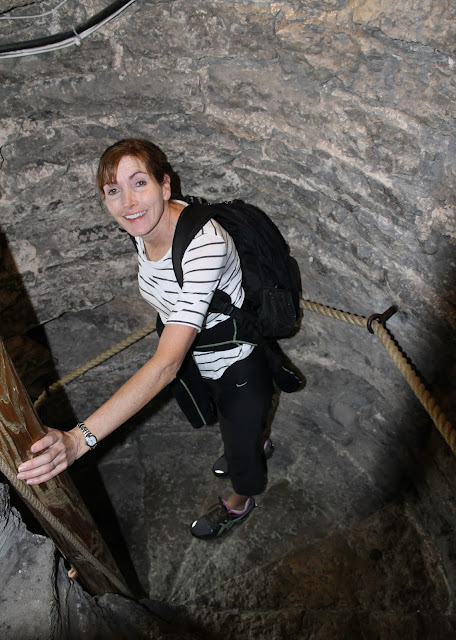 We had a great view of Tallinn from the top 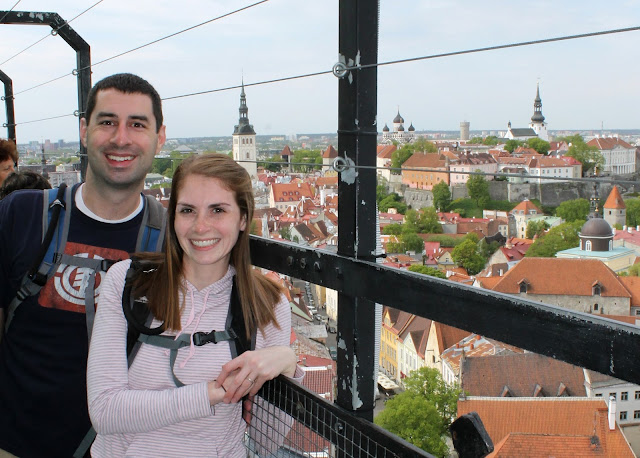 Some of the towers and wall that surround Tallin 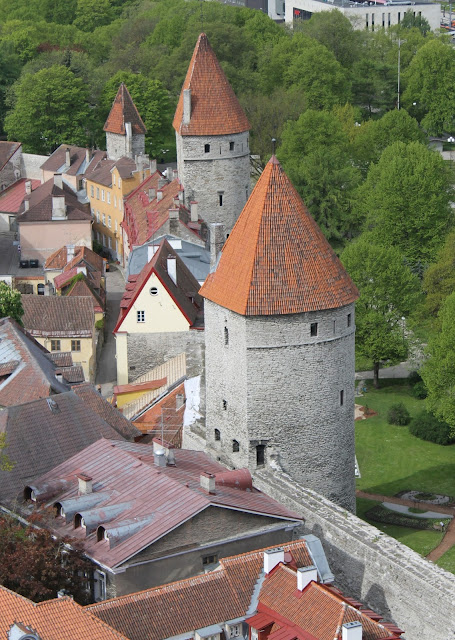 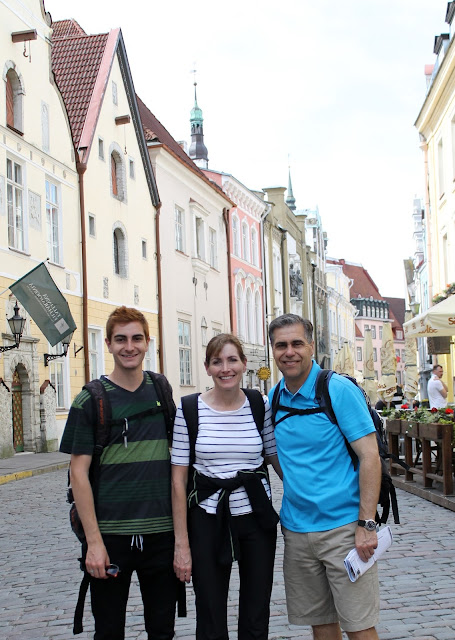 The town hall and town square. In the square is also the Raeapteek, a pharmacy that has been in operation since the  15th century. We paid a visit and were glad to see that they now carry modern remedies instead of sun bleached dog feces and burnt hedgehog powder. 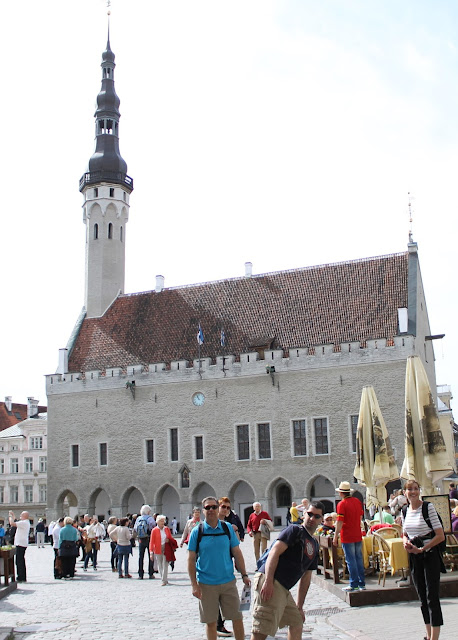 We then left the merchant buildings of "Lower Town", and climbed up Toompea hill to "Upper Town." You can see Upper Town in the first picture, sitting higher than the rest of the buildings on a stone wall. The Upper Town has historically been the seat of power for the city.

The Alexander Nevsky Cathedral is a very grand building and popular tourist destination, although it is disliked by Estonians. The cathedral was built during the Russian Occupation and directly faces the Parliament building, and thus is a symbol of Russian oppression. 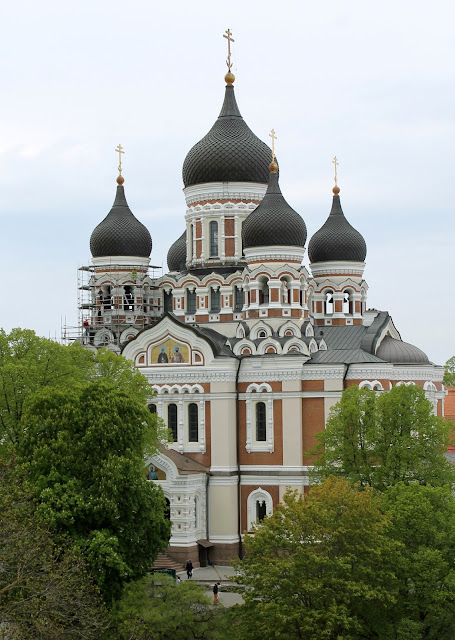 As an orthodox cathedral, every inch of the interior is ornately decorated. Quite the contrast from the Lutheran churches. There were several tour groups in there with us and they all seemed very eager to participate in the custom of lighting a candle. It was a little unsettling to be in a big crowd of distracted tourists, walking around with fire. I was glad to leave without having my hair or clothes burned. 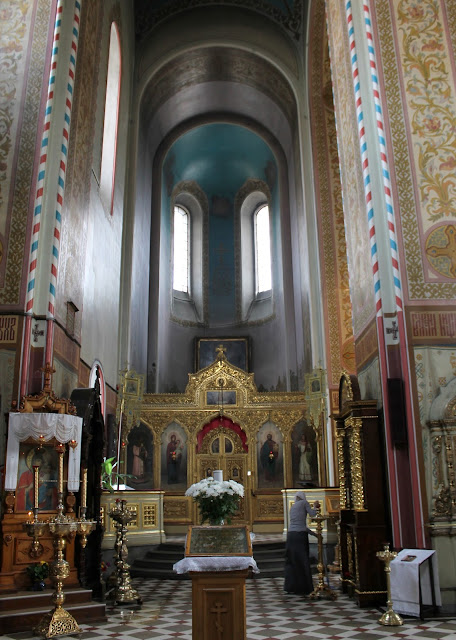 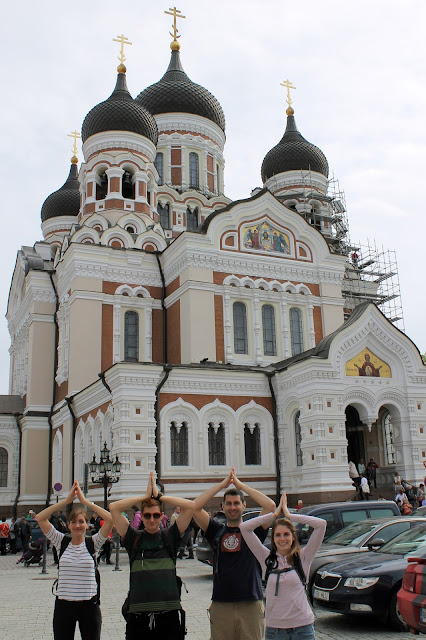 We found this guy near the cathedral 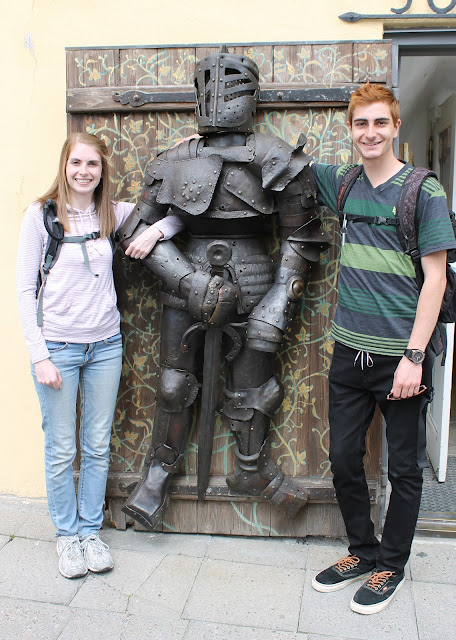 After the cathedral we went across the street to Parliament (the pink building) which is connected to Toompea Castle. Three of the four towers of Toompea Castle are still standing, and the biggest one, Tall Hermann, is behind us. The flag on top shows the government currently in charge of the country, which is Estonia! 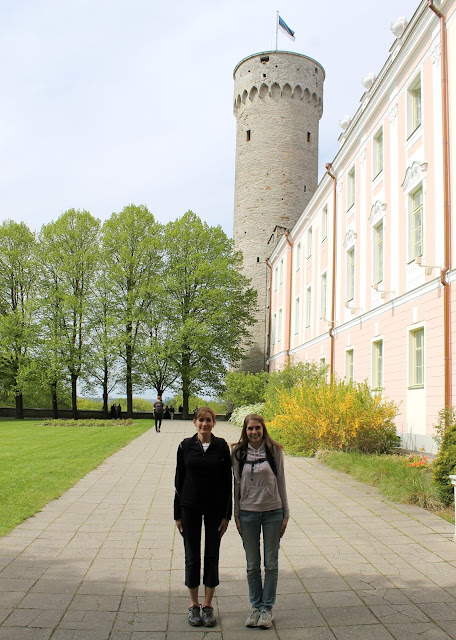 Our final stop was Kiek in de Kök. Kiek in de Kök was an artillery tower built in the 1400s, and now it houses a museum about Tallinn's military from medieval to modern times.  There are cannonballs from 1577 still embedded in the tower walls, which are 13 feet thick. 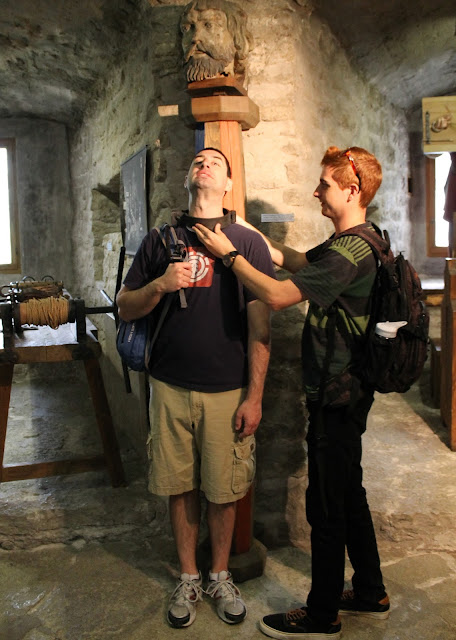 Trying out some restraining devices. Although I'm smiling, I actually felt a little panicked because the collar was locked on, but I had to hold myself up with my hands or I would choke because I was too short. 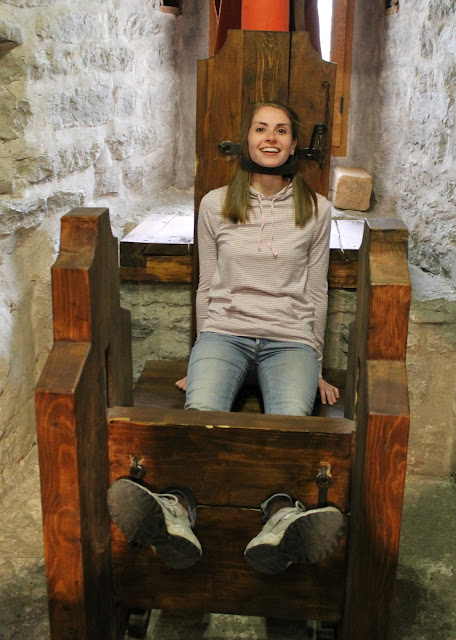 Military hats from different eras that my mom was very hesitant to put on, but luckily no one got lice. 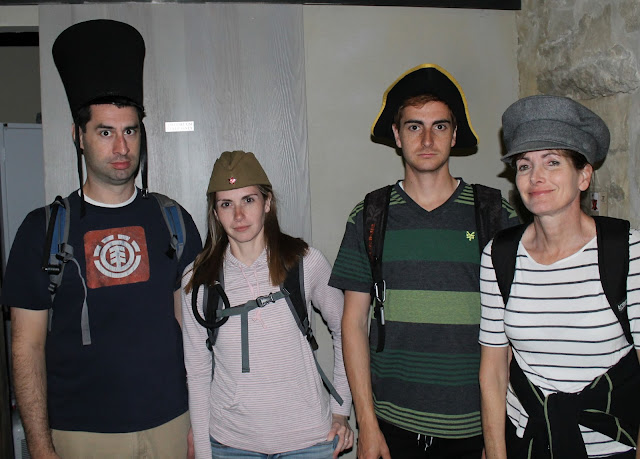 An enormous cannon that was probably close to 15 feet long 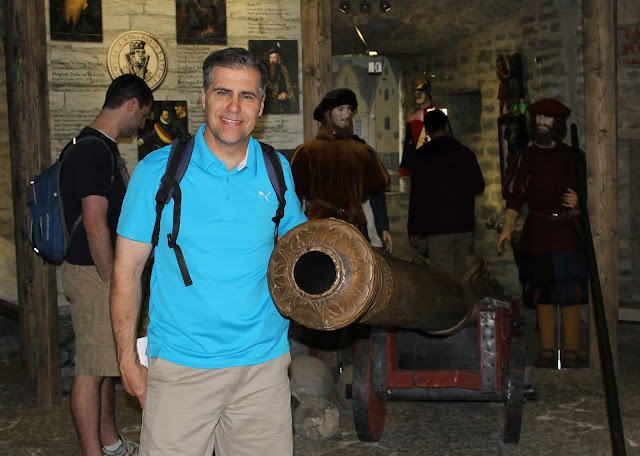 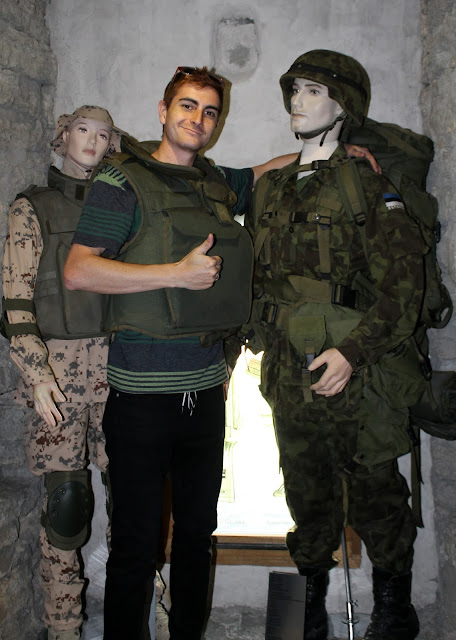 Farewell Tallinn - we enjoyed our visit! 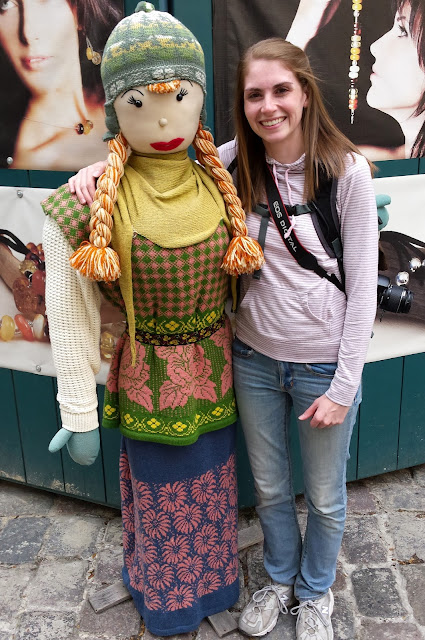