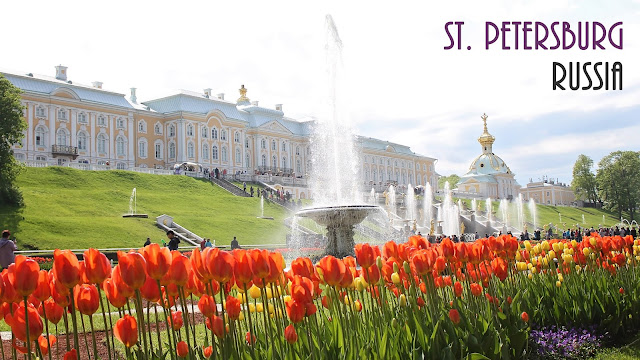 I am still trying to decide what I thought of St. Petersburg. It's an incredible city, full of cathedrals, grand palaces, gardens, museums, and theaters situated right on the river Neva. It also has a brutal history, however, that can overshadow the splendor. It was built by peasants who died by the thousands, has been through several revolutions, survived German occupation for three years in WWII during which 1 million people died, and there are rows and rows of Soviet era apartment blocks that just look depressing.  I just couldn't imagine living there, but maybe with time it would grow on a person.

Normally we self-tour, but for our day Russia we went on two shore excursions through the ship. Americans entering Russia are required to have a visa, although this rule is waived if you are on a ship tour. Even with the tour, we still had to go through a strict passport control process where we were issued a temporary visa to use for the day. St. Petersburg is also an enormous city and it would have been very difficult to see much on your own. I was glad we had a dedicated bus to take us around.

Tour #1: Bus trip around the city center with stops at the Peter and Paul Fortress, the Church of the Savior on Spilled Blood, St. Isaac's Cathedral, and a souvenir store.


Peter the Great, the man the city is name for. This statue was created using Peter's death mask so he either had a really tiny head or the sculptor was way off on his body proportions. 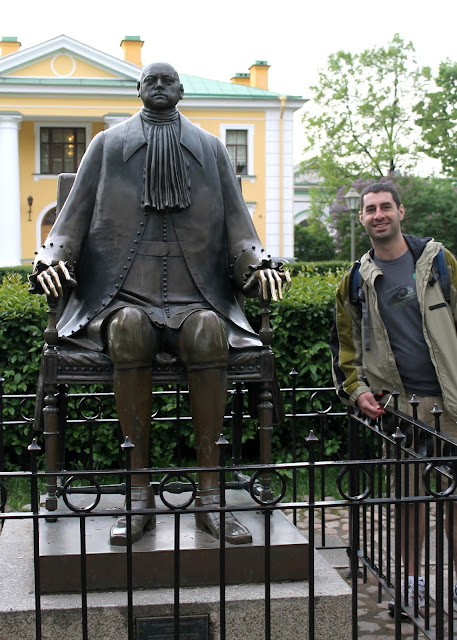 This cathedral in the Peter and Paul fortress was the first building in St. Petersburg. We could not go in because it was a holiday and it was closed to the public. Almost all the Russian tsars, including Peter the Great are buried here. 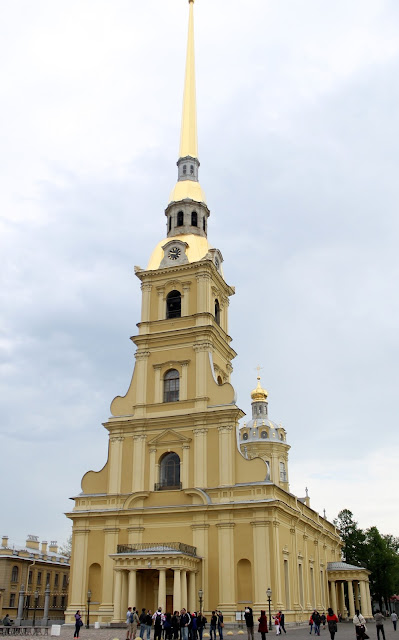 The St. Petersburg Mint was built in 1800 and is one of two mints in Russia. It is still producing coins and medals. 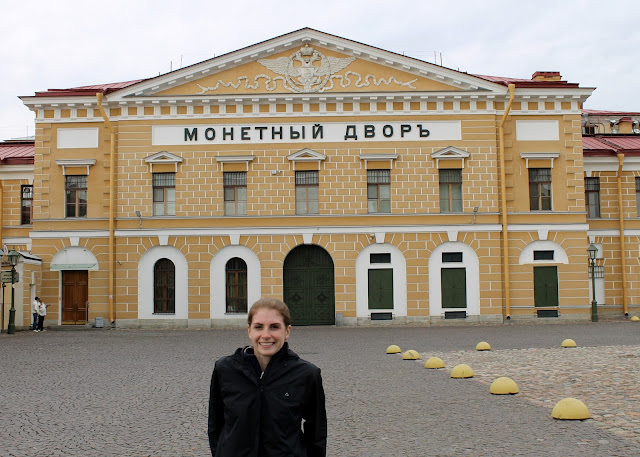 At the edge of the fortress overlooking the river Neva. The fortress was never used to defend the city, but instead housed a garrison and a high security prison. 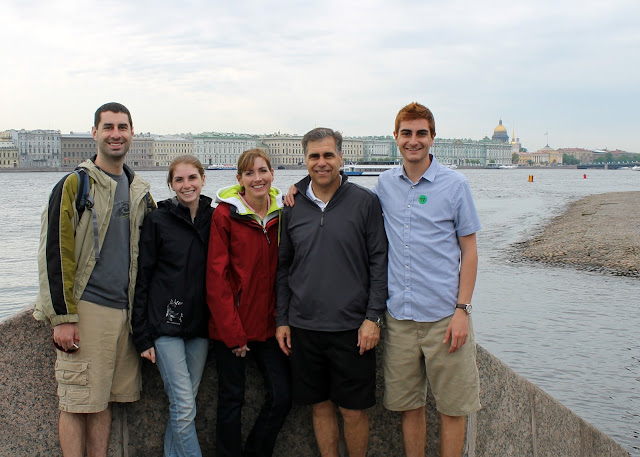 The church of the Spilled Blood was built in traditional Russian style as a memorial to Alexander II, who was murdered by terrorists on this spot in 1881. It fell into disrepair after WWI and was used as a warehouse and garbage dump and was almost torn down, until a restoration project began in 1970. 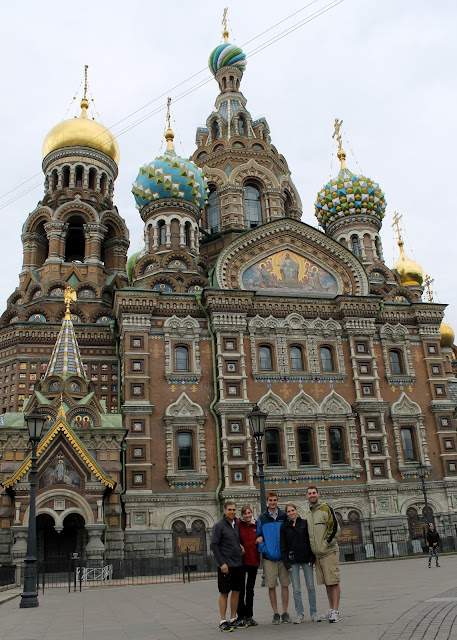 St. Isaac's Cathedral, built in 1858, is the largest orthodox cathedral in the world. The dome is plated with pure gold and is the 4th largest cathedral dome in the world behind the Pantheon in Rome, St. Paul's in London, and the Duomo in Florence. 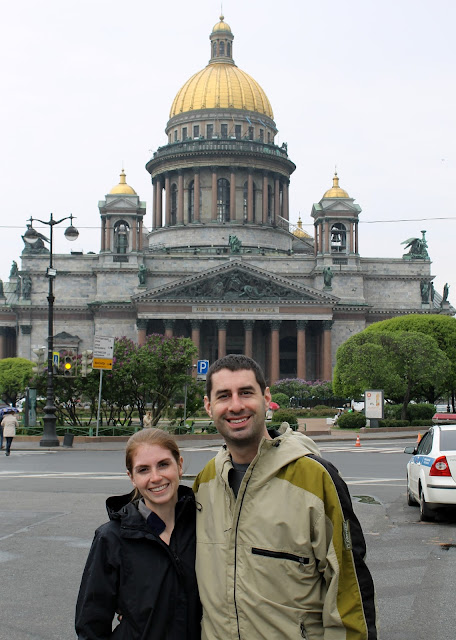 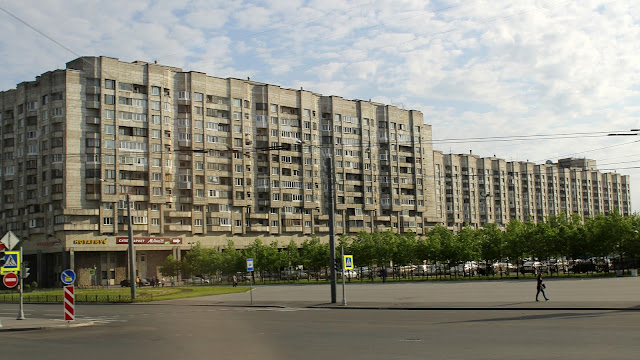 Tour #2: Bus trip through the city to Peterhof Palace and gardens. We toured the gardens and the returned to the city by hydrofoil boat.


The Peterhof Grand Palace and Grand Cascade Fountain. The Peterhof was built by Peter the Great as his summer residence in the 1700s and grew and expanded under successive emperors. It is often referred to as the "Russian Versailles" and is one of the most visited places in Russia. 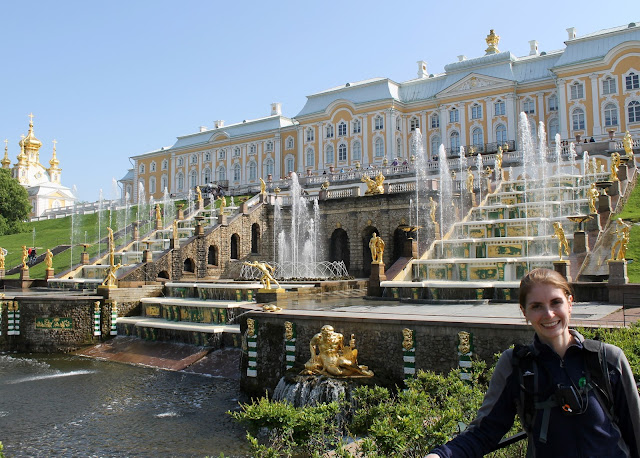 The Grand Cascade is made up of 64 fountains and 200 statues. The fountains are unique in that they are fed by gravity and no pumps are used. Gravity is able to sustain the fountains for up to 10 hours of use each day. 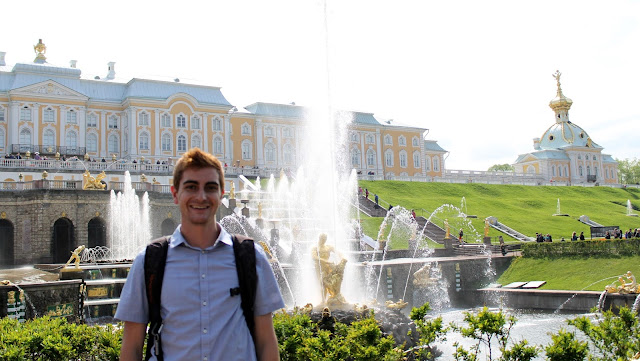 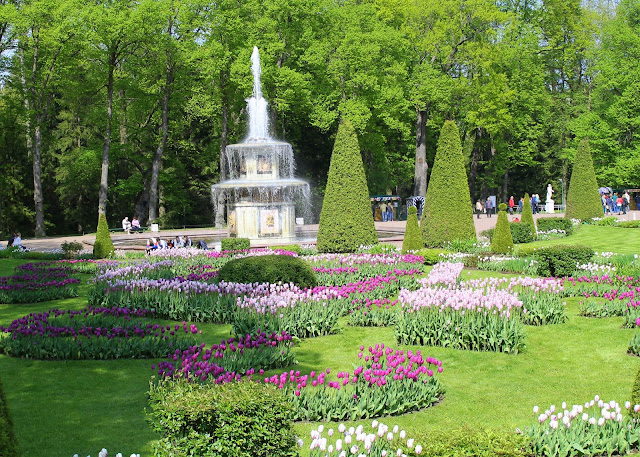 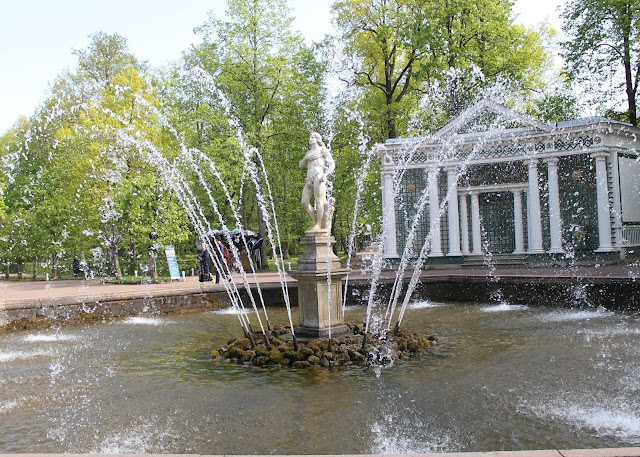 You can see our lovely earpieces in this picture. Everyone in our group had one, and our guide used it to communicate with us while we wandered the gardens so we didn't have to stand right next to him. It was nice to be able to have some freedom, and if you started to hear static you knew you had wandered too far and needed to head back. 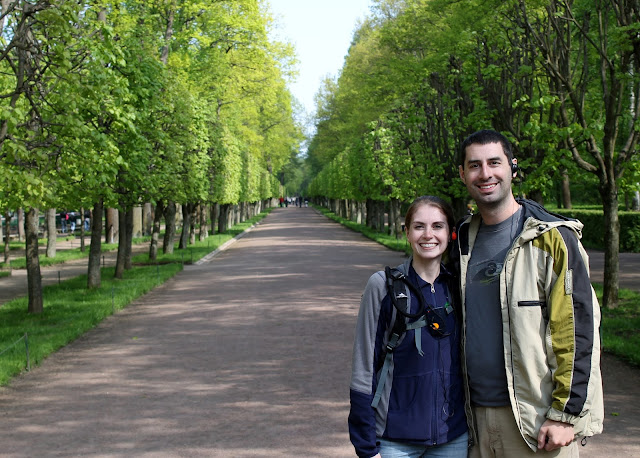 Our guide warned us to be careful of pickpockets at least 10 times. They also had warning signs posted around the gardens. I guess it's a big problem in the area, but luckily we didn't have any trouble. 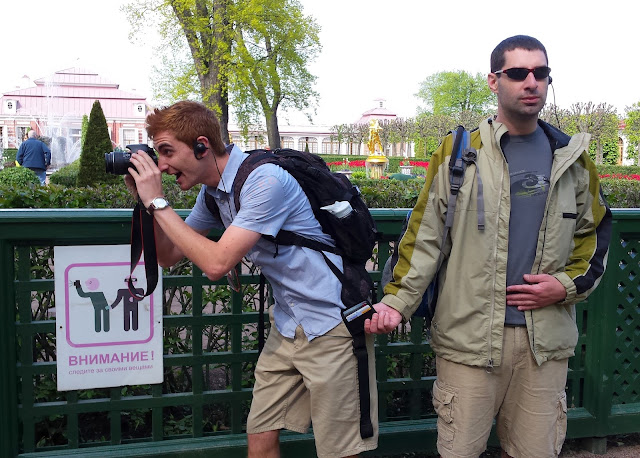 One last look at the Peterhof before we headed to our boat to take us back. The canal from the palace flows all the way out to the Gulf of Finland. 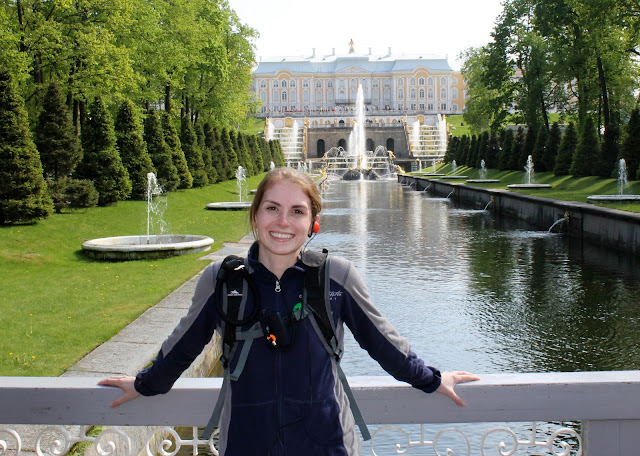 hahahah i laughed so hard at the picture of dave pickpocketing. he look so nonchalant? and D is the epitome of tourist in that picture.

Did you see the warning sign in the picture? We were just copying that :)