A Much Needed Night Out

After our bad week, I decided that we needed to get out of the house and do something fun. Since we are staying in Provo right now, we decided to take Sophie to Trafalga, which is now called the Peaks Fun Center. Either way, that place hasn't changed since I went there as a kid, which is not a good thing. The decorations were all falling apart, half the games were broken, and the heat was out so we were glad we all had a coat.

We bought the pass that gives you a game of mini golf, some arcade tokens, and a dip n' dots ice cream. Sophie did not like the mini golf at all. The dark and uneven surface of the course made her nervous, and she wanted nothing to do with her golf club. Because she wasn't happy, we played as fast as possible and our golf scores were not anything to be proud of (especially mine). Sophie liked the arcade part of the night much better. We started out playing the traditional games like skee ball and basketball, but she was just a little too young to enjoy them. 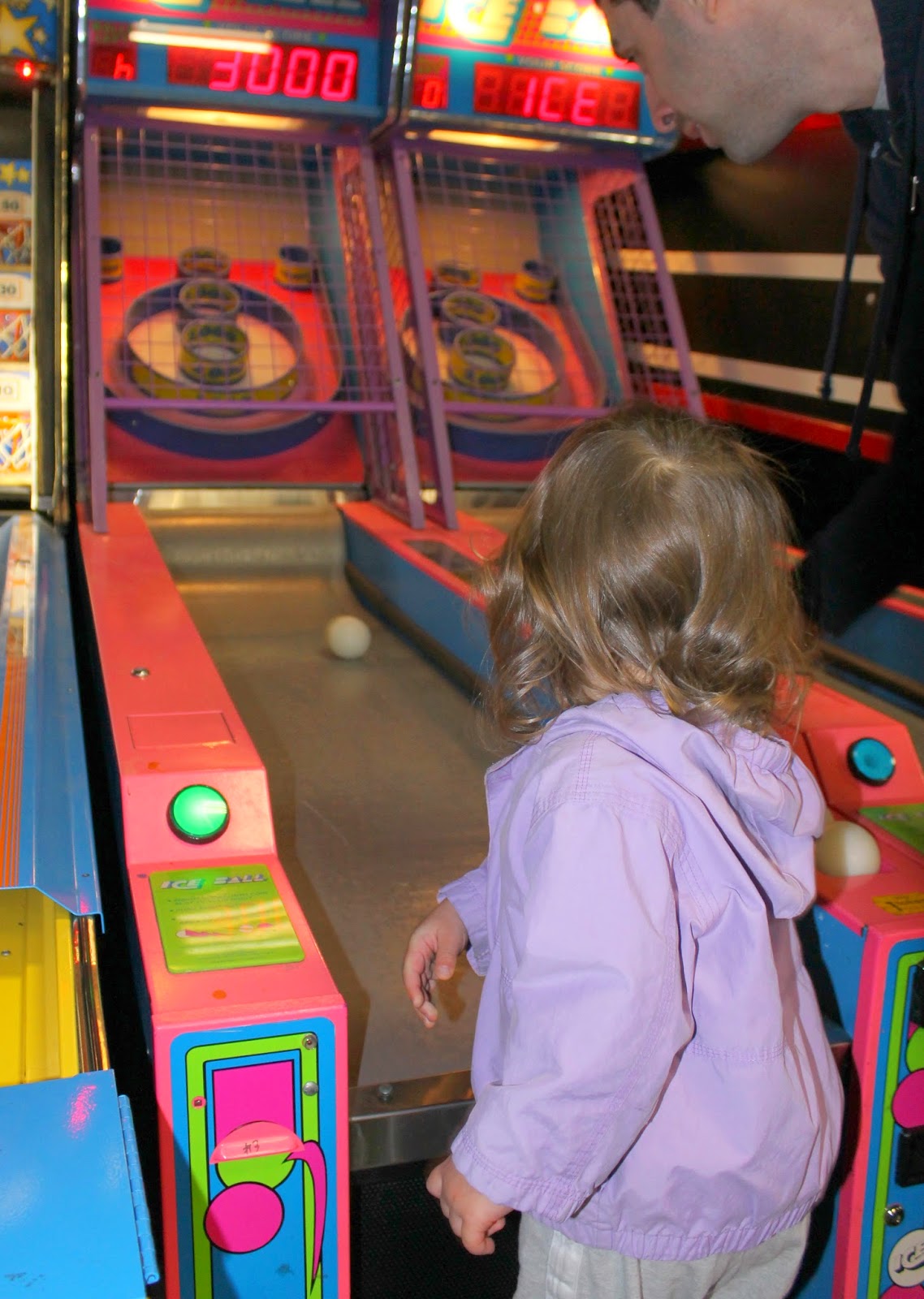 We then tried a few racing games, which turned out to be broken, but she still thought it was fun to take the wheel and pretend to drive. 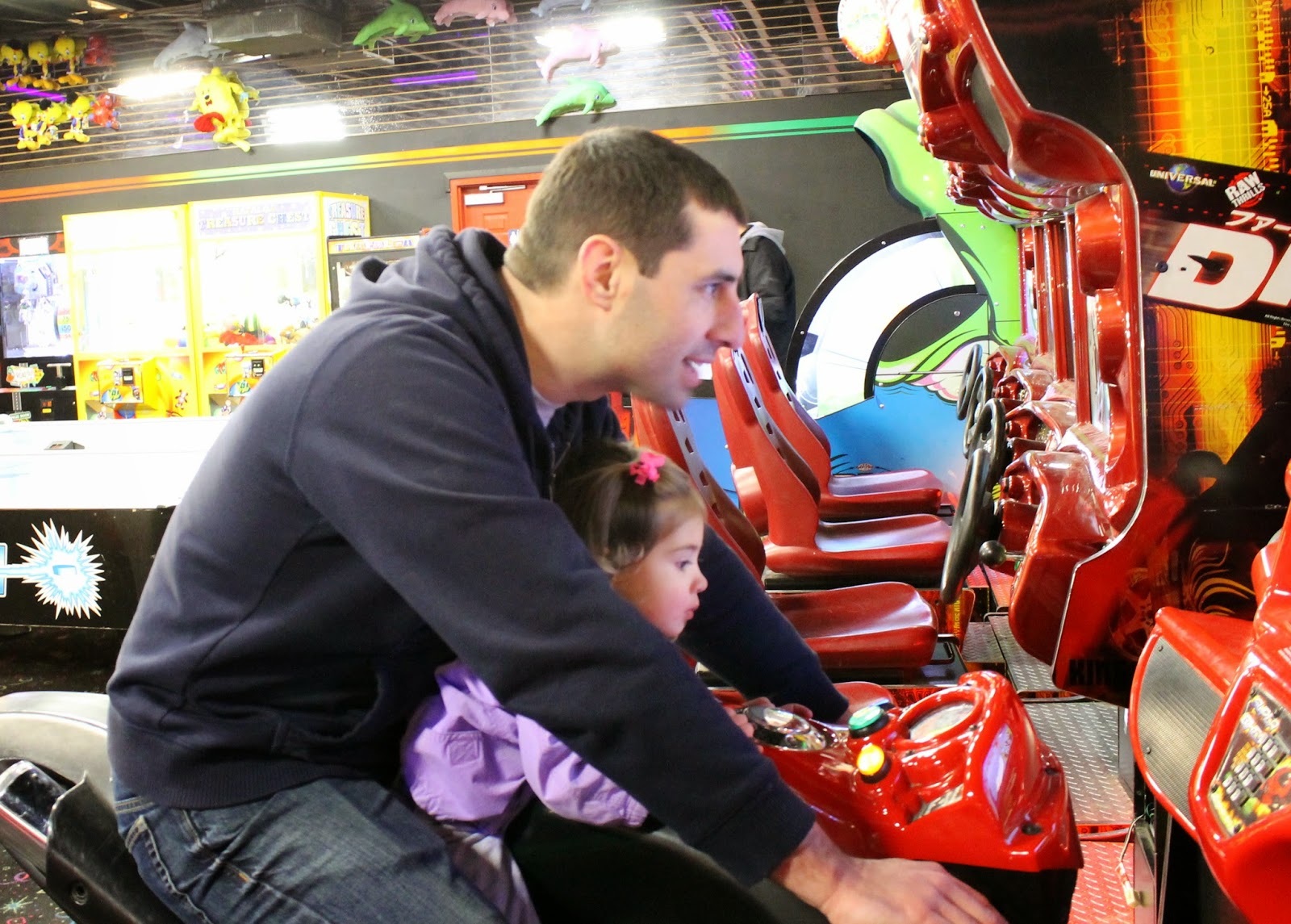 After racing we let her try a few of the "luck" games where you just drop a coin in the slot and hope to win something. Sophie thought this was super fun and dumped token after token in several games. She actually won quite a few tickets, including one jackpot! 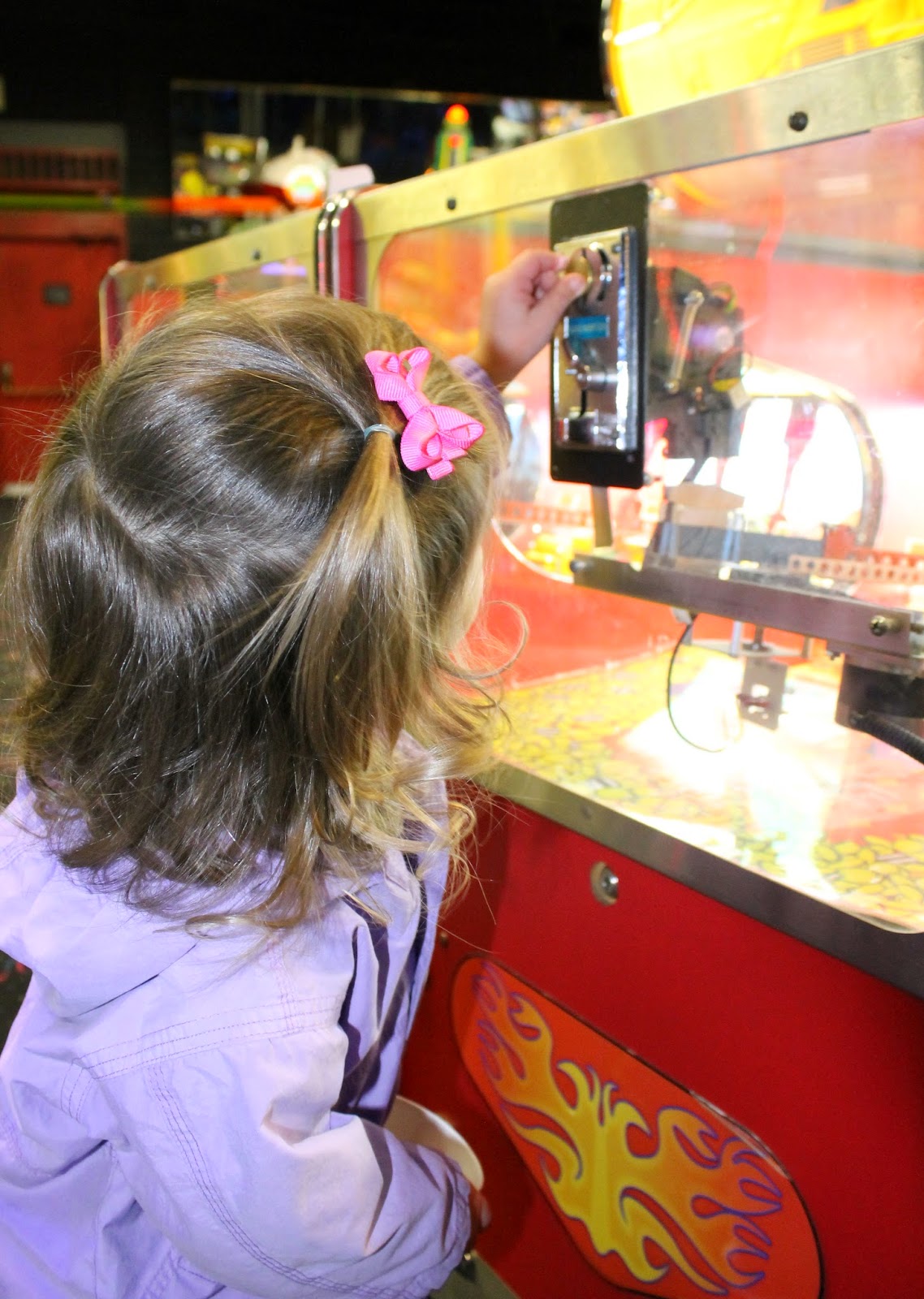 Video: Sophie winning the jackpot on the dump truck game


When we ran out of tokens she gathered up all the tickets and put them my diaper bag. She won 605 tickets (240 from a jackpot), which we traded for a stuffed turtle, a little green finger monster, two rings, and some candy. She was sooo happy with her little prizes. 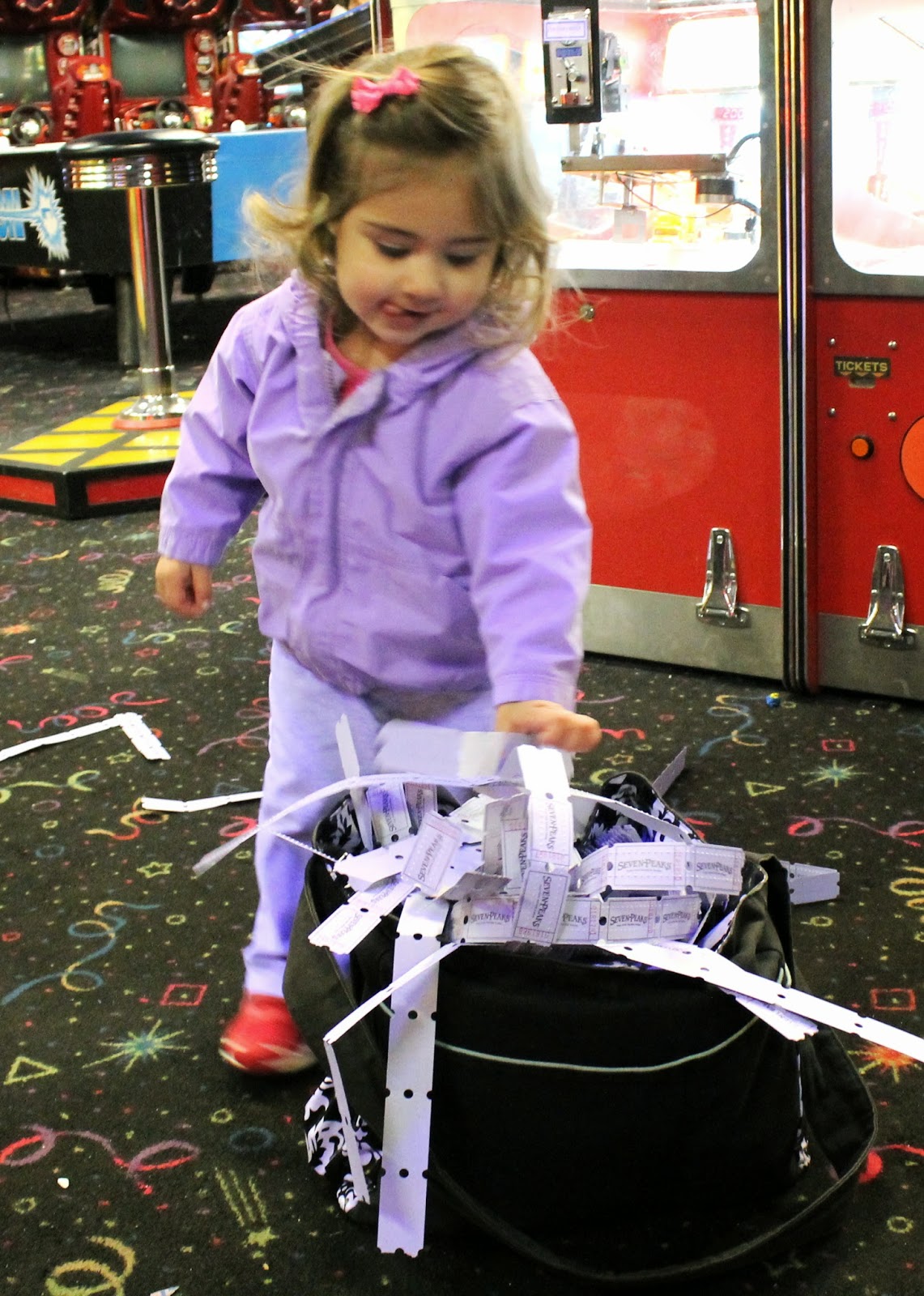 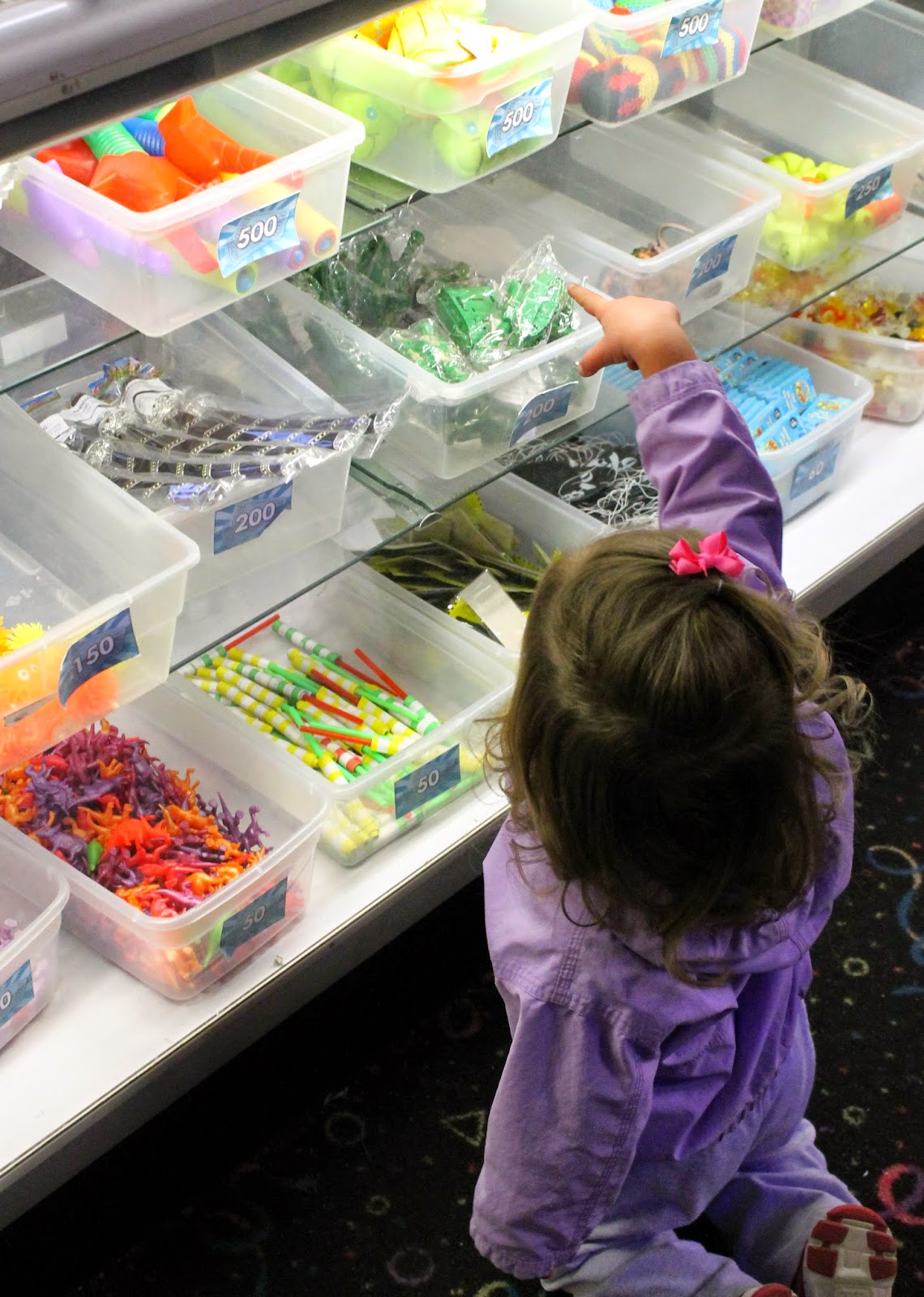 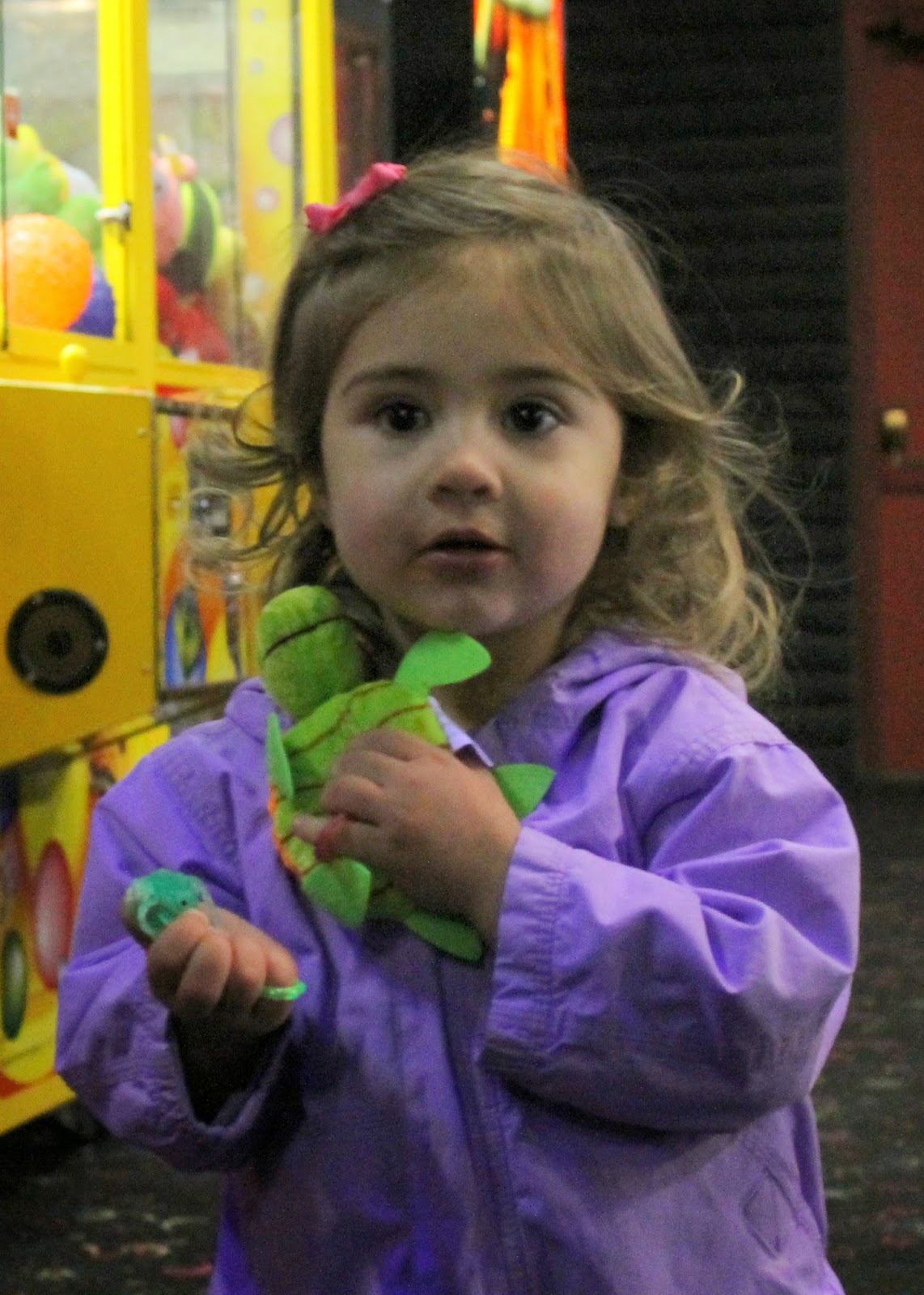 To round off our evening, we got a "Cookies and Screams" dip and dots to share. They were orange and black and we tried not to think about how long ago Halloween was as we ate them. I thought they were a bit freezer burned, but Sophie thought they were delicious. So, despite the derelict condition of the place, we had a fun night and I'm glad we went.
Posted by Melanie Howe

Ha ha ha. I loved reading this because I've been there with my kids a few times and it's true-- that place is the ghetto!!!! Seriously, it is soooo bad! They need a major renovation... On EVERYTHING!!! I'm glad Sophie liked her prizes though and that you were able to get out and get your mind off things. It's funny the size of that turtle for the amount of tickets :) Anyway, Sophie is adorable and I love your little fam!

How cool that Sophie won the jackpot. My kids always try for those at Chuck E Cheese and never win. It was cool to see the tickets coming out of the machine for so long. I was sorry to hear about your miscarriage.