I have tons of pictures on my computer just taking up space on my hard drive. Some of them make it on to the blog, but I hardly ever have them printed, and if I do, they just sit in an envelope in my closet. Last year I decided it was time to do something more.

I searched through all the pictures we had taken since 2006, picked my favorite 10-15 from each year, and then had each year printed as an 8x10 collage. These are now hanging in my hall and I LOVE to look at them. It's so fun to look back at our life over the past 5 years and remember all the fun things we've done - trips, dates, family events, holidays, etc... 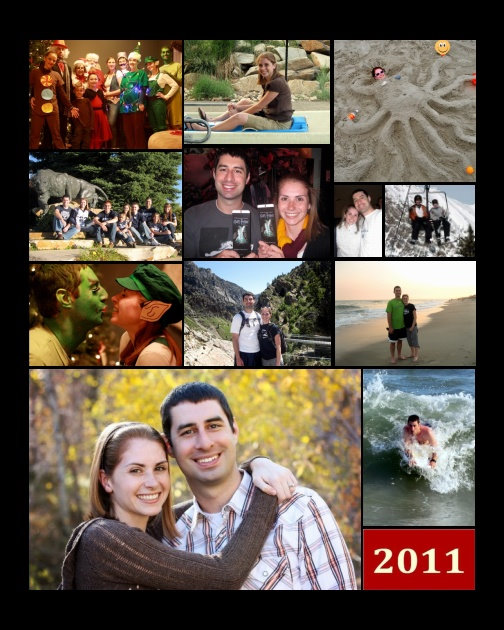 Some highlights of 2011 include: skiing at Snowbird, cheering on Jimmer and the BYU basketball team, our 5 year anniversary, a trip to the North Carolina coast with the Howe family, attending the final Harry Potter movie premiere, spending time with the Lamberts in Utah, and Christmas with the Howe family in Texas. It was a great year!!
Posted by Melanie Howe No comments:

Labels: My attempt to do something crafty, Us

We have been without Internet at our house for the last two weeks - ugh. Thankfully it came back online last night and I thought I'd celebrate by posting to the blog!

Unfortunately, nothing interesting has happened since our last update, so I don't have that much to write about. The highlight of my week was when the service club snuck in to the front office at my school to give us a "heart attack". There are now hearts with little messages taped everywhere - the doors, the counter, the chairs, the cupboards, even the case to the thermostat.


This one taped to my desk makes me smile every time I see it :) 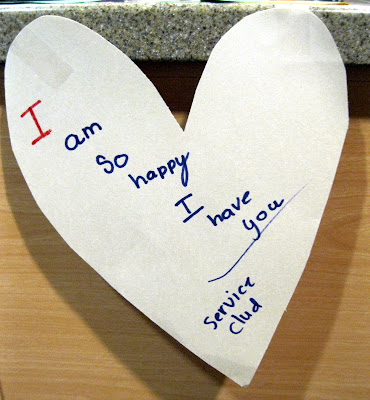 After Derek gave a great farewell talk (he will be an amazing missionary!) at church, which was nearly canceled due to snow, we went back up to the cabin for some more mountain fun. The snow fell pretty steady throughout the day and pretty soon we were in our very own winter wonderland. 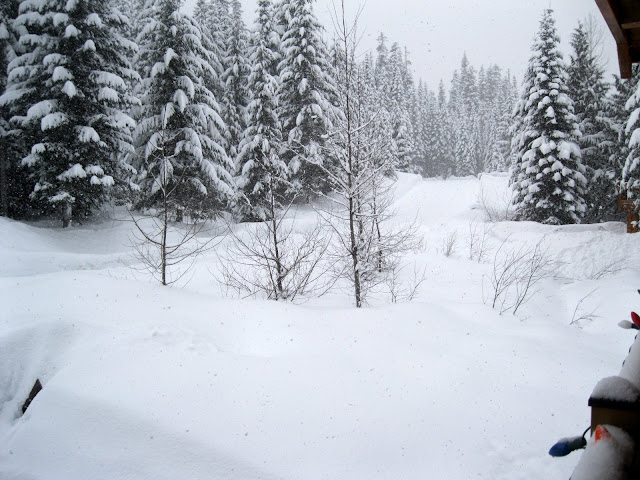 I took advantage of all this fluffy goodness and helped myself to several snow cones. (I just may be a snow cone junkie). The recipe is simple: Step 1 - Go outside and gather snow. Step 2 - Flavor snow. I am partial to cherry/lime and blackberry/peach. Step 3 - Eat, then repeat! 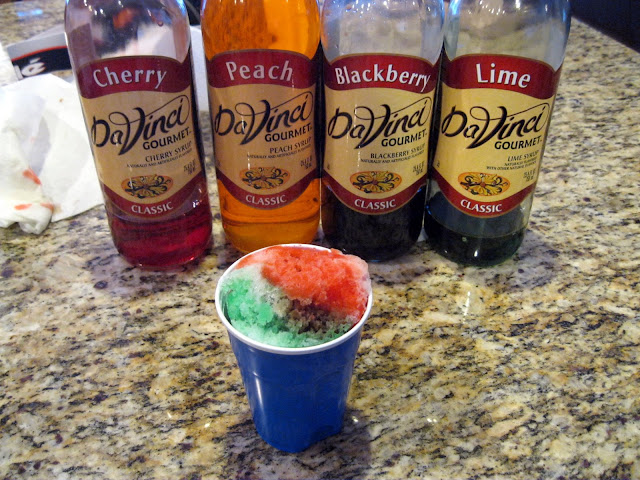 On Monday we were able to ski with my mom and dad, and Derek. We went to Hyak, which is only a couple minutes from our cabin, and had a great time! This was our first ski trip of the year, so we didn't really have our "ski legs" yet, and by the end of the day we were both wiped out. I've been exercising pretty regularly, but skiing is a whole different workout and my thighs and calves were really feeling the burn. 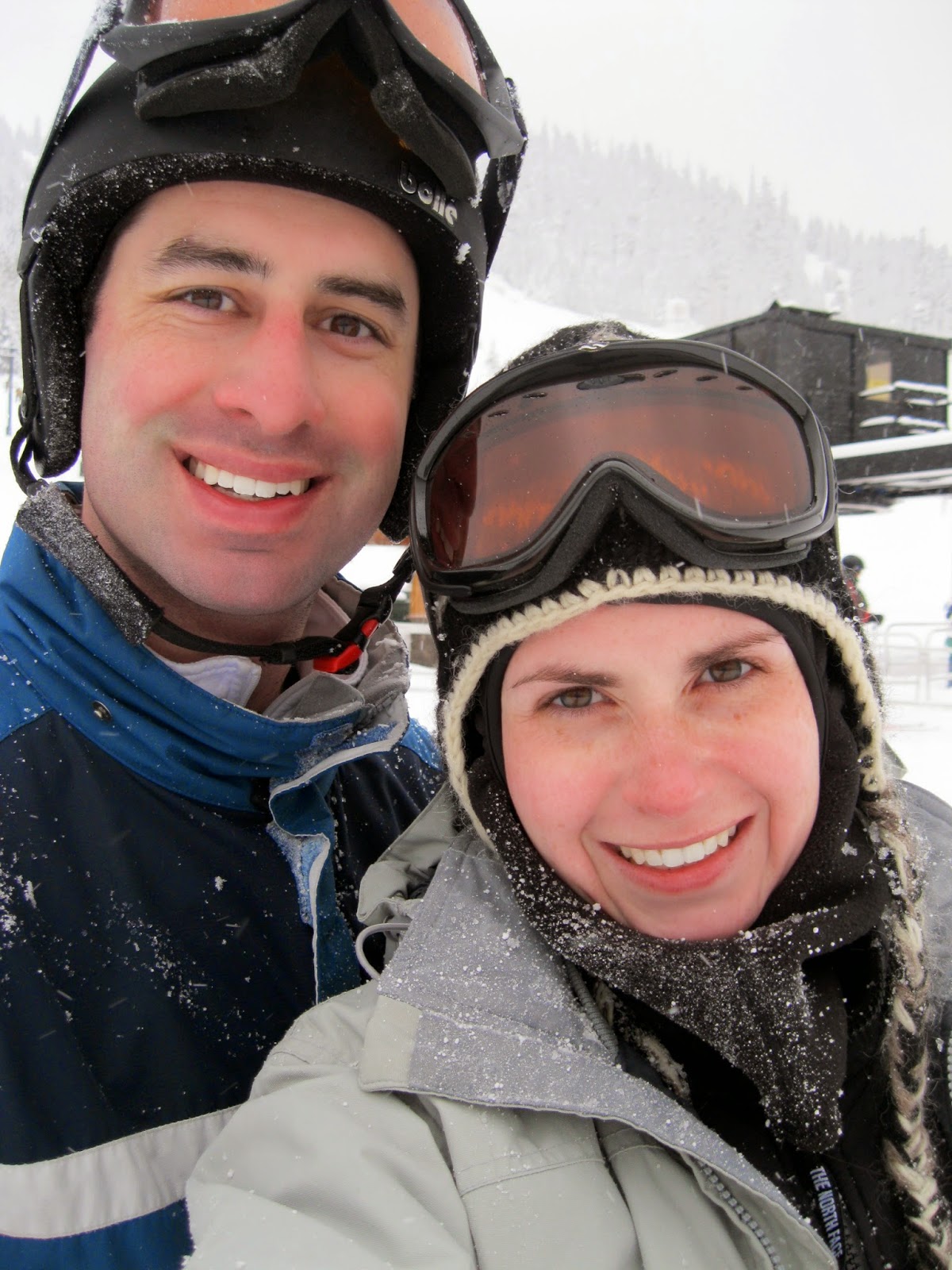 The morning after we got home I got this report and picture from my dad:

Big snow at the cabin today. I was in the valley and couldn't get up as the freeway was closed for 7 hours. Derek cleared 21 inches off the driveway and then tried to drive to the resort. He made it a car length before getting stuck. The guy running the grader came by and helped him break free and get it back in the driveway. Hoping for big pow tomorrow and being able to get out of our road.

Looks like we left to get back home just in time! Now we need the snow to head down to Utah so we can start using our tickets to Snowbird.... 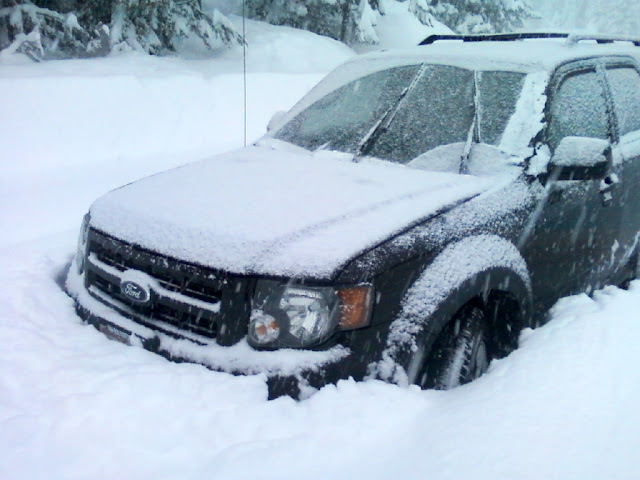 On Thursday we left Utah for a quick trip to Sammamish for Derek's farewell. After arriving in Seattle, we went straight up to the cabin from the airport for some time in the mountains.

Near our cabin there is a wilderness area that is perfect for snowshoeing because you can traipse around in the woods, blazing your on trail, because it's impossible to get lost! You don't have to worry about keeping track of where you are because the forest is bounded by a creek, a highway, power lines, and a ski run so, unless you 're walking in perfect circles, eventually you'll run into a boundary that you can follow back home.


Snowshoeing with my mom, Derek, Dave, and Jobe (the dog) - in this picture we are boldly crossing a stream of water only a few inches deep 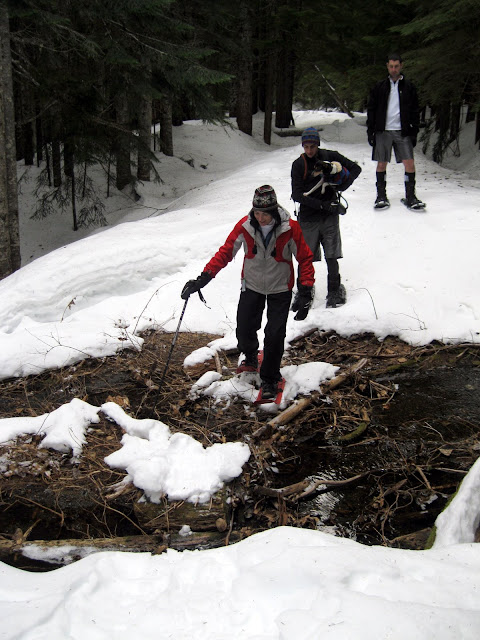 Derek will be leaving soon for Teresina, Brazil, which is right on the equator and the temperature rarely goes below 75 degrees 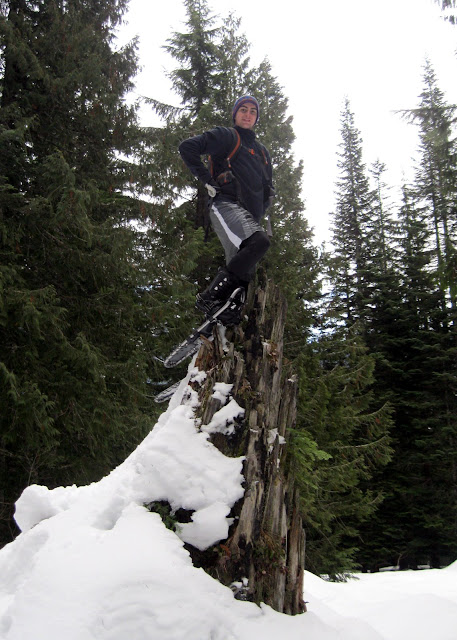 Just Dave and I went on a second snowshoe adventure again today. There was fresh snow on the ground and the mountains should get another foot (or more!) over the weekend. We will hopefully be able to ski on Monday before we have to go home! 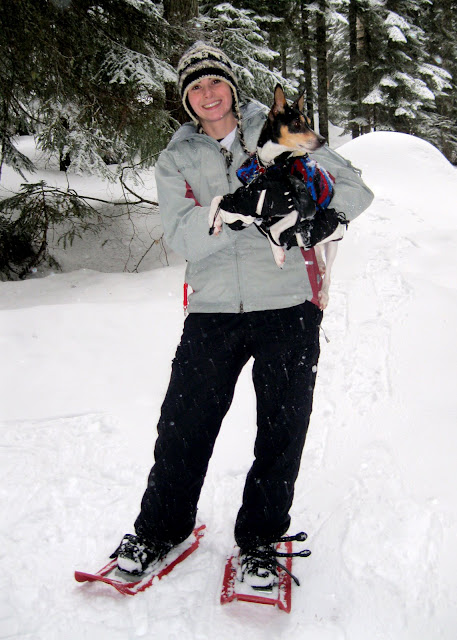 BYU Basketball and a Birthday

Saturday was our niece Anne's second birthday. Ever since we took her to a game a few months ago, Anne has been obsessed with BYU and basketball. Since we had tickets to the game the day of her birthday (thanks grandma Mimi!), we decided to take her with us.


Meeting Cosmo (aka Beast) - she was a little shy when he first came over, but was all smiles after he left 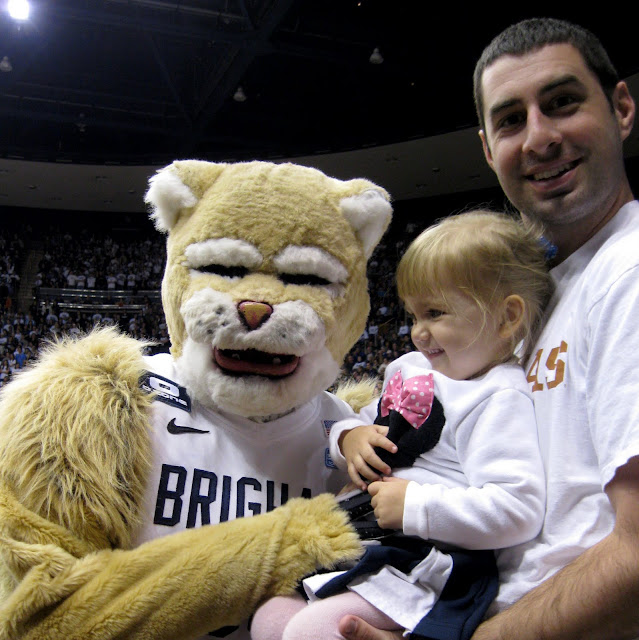 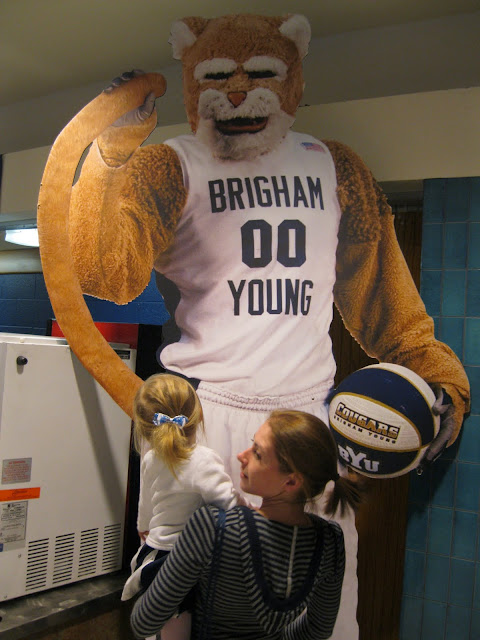 During the second half Anne suddenly became very affectionate and would hug Dave, and then hug me, back and forth and back and forth. I guess she like her birthday?! 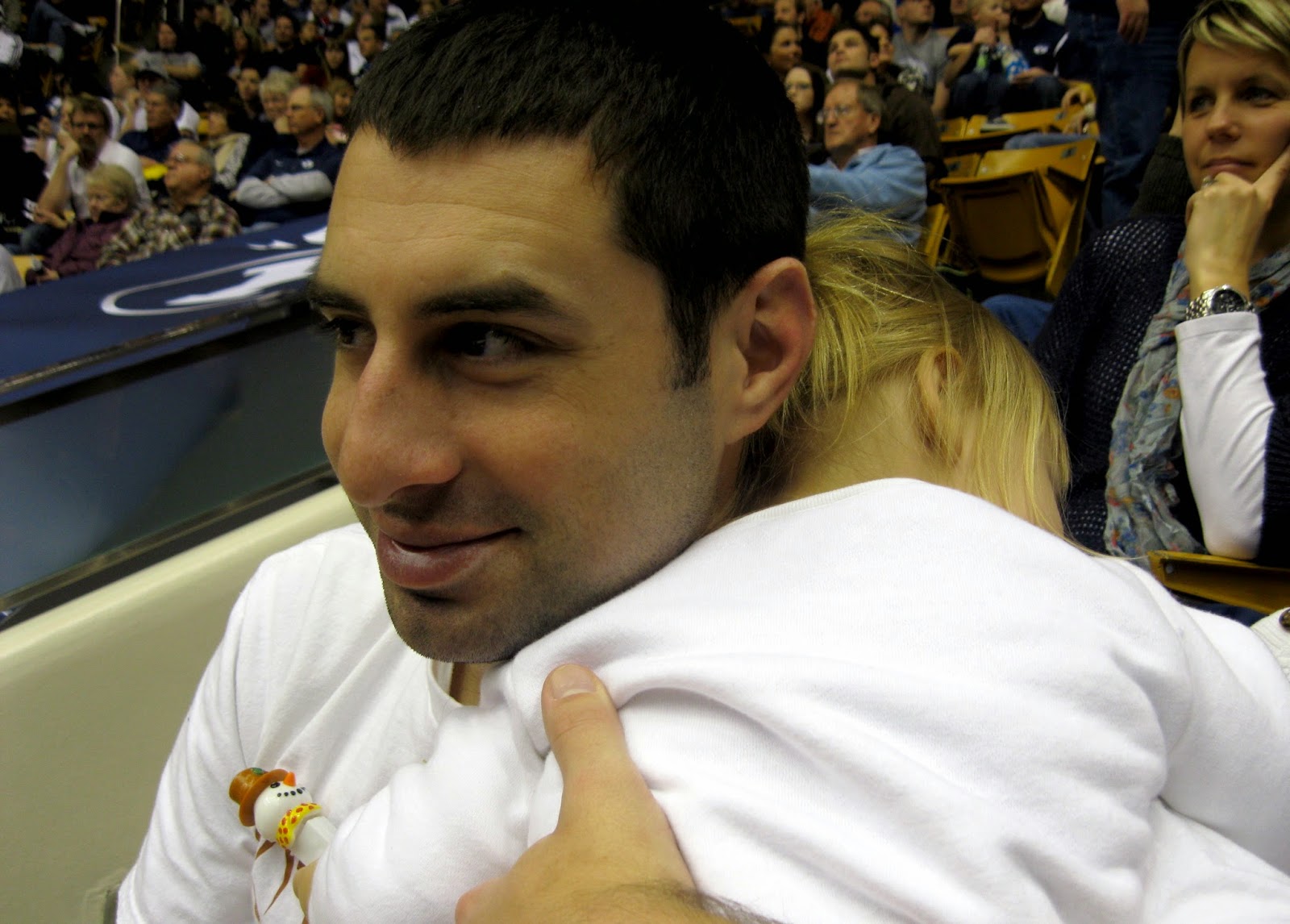 Towards the end of the game Anne started to get a little restless, but Dave has a unique talent for inventing ways to keep kids entertained. This game is called Feeding Frosty and it turned eating one goldfish cracker into a minute long process. She ate a lot of fishies this way - no one ever said pez dispensers are exclusively for candy!

This post is brought to you from the ward nursery closet...

Dave and I have been serving as the nursery leaders in our ward for the past 6 months. We have really enjoyed working together and have found it to be a "mostly fun" calling. We teach the youngest group of kids that have just turned 18 months, so we spend a lot of time distracting and consoling kids that would rather be anywhere BUT nursery.

Today I did some cleaning in the closet and found this lovely doll. I'm pretty sure this does not qualify as a comfort item. Wouldn't you shed a few tears if your mom dropped you in a room with this? It will be delivered to D.I. this week (unless someone out there would like to claim it.) 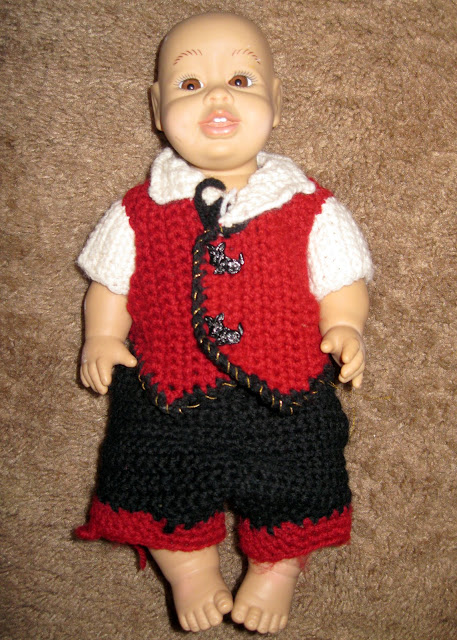 All of our friends ended up back in Texas after school, so it's really fun to spend time with them whenever we make a trip down there. Even though we were really busy doing stuff with family, we found time to spend 3-4 nights to hang out with the gang. Just like old times!


Night at James and Christie's house - the boys played Super Smash Brothers, while the girls made cookies. 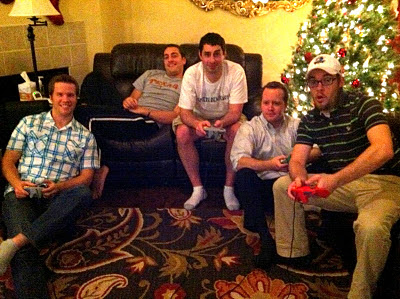 Whirlyball - we changed around teams several times so I have no idea who won in the end. Pretend the picture is blurry because we are moving so fast, not because I have a cheap camera. We had a lot of fun... 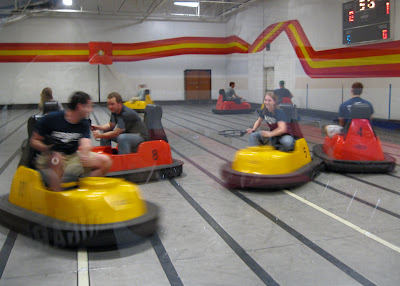 ... and drove a car through the barrier wall to knock both doors off their hinges. Yeah Donny! 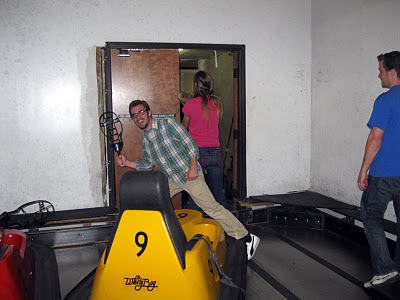 On New Years Eve we had a party at Dave's house with friends and family. The video is James vs. Ben playing Raving Rabbids on the Kinect - this was a game where you try to dodge falling projectiles, avoid lasers, jump out of bear traps, and shake sticky bombs of your legs. Hilarious!


We also played several rounds of Wackee Six, held a Bunko tournament (Christie won!), counted down to the New Year, and then played four square in the church parking lot across the street.
Posted by Melanie Howe 1 comment: