First, Little Caesar's pizza is a lot better than it used to be. It's still on the lower end of the pizza food chain, but it's Hot! and Ready! and only $5! Since it's so cheap it has become my go-to place for food on those nights I just don't feel like cooking... which leads us to this story:

Dave loves to cover his pizza with parmesan cheese and crushed red pepper. I had started eating while Dave was still "decorating" his pizza, when I suddenly heard a "WHOA!"

He had confused the "sprinkle" side of the lid with the "pour" side, and dumped a huge mound of pepper on his pizza. The pile on his pizza was probably a quarter of what had been in the jar. I was trying so hard not to laugh while chewing, but a small amount of drool may have escaped.

He managed to scrape a good portion off, but it was still one of the spiciest pizzas he's ever had :) 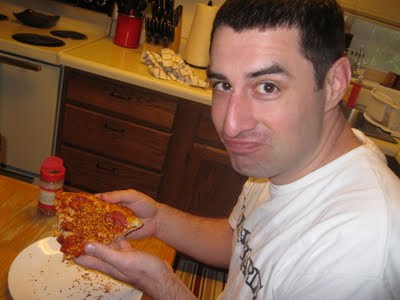 Did you kiss him afterward is the real question...

And I really can't wait to hang out again. I love talking to you! And my fears did come true about the exercising thing (if you know what I mean). I have a lot of practicing to do :)