On to Round Two

BYU may be out, but MBA Supply Chain lives on! Dave's intramural team won 51-24 tonight and will advance to the next round of the tournament. Dave only contributed two of those points, but played excellent defense and got a bunch of rebounds. Go supply chain guys! 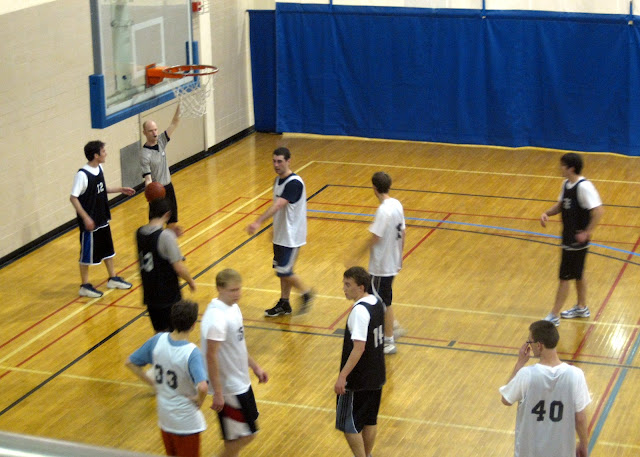 Our intramural season came to an end last night. What we lacked in skill (it had been a loooong time since we had played basketball), we made up for with spirit. I had a blast playing and am really looking forward to next year! 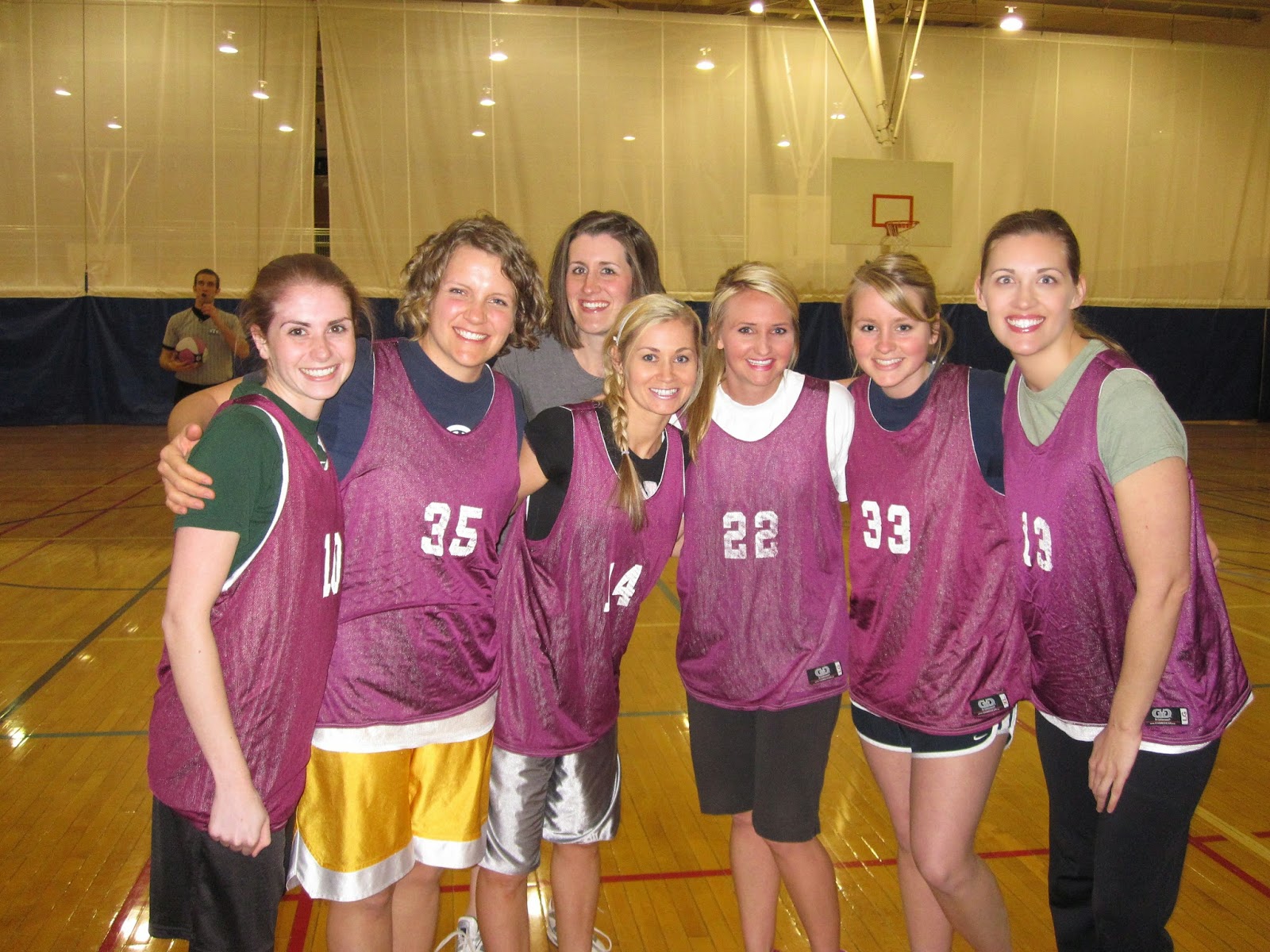 What to do when your buns are burning....

While making Sunday dinner today I forgot about some buns I had put in the oven to toast. I remembered them once I saw the little tendrils of smoke coming out of the oven. Upon opening the oven, I found that the buns were very, very black and smelled very, very burnt.

I grabbed the tray out of the oven and since they were too hot to put in the garbage and too fragrant to keep in the house, I did the first thing that came to mind - run outside and throw them in the bushes by our door.

After dumping the goods, I noticed our neighbor (who we don't know well at all) was standing right there watching the whole thing. I muttered "burned food" at her before racing back inside. Consequently, there is no photo with this post because I figured the only thing more strange than throwing food in the bushes would be to go back outside and take a picture of it.
Posted by Melanie Howe 1 comment:

Yesterday was BYU's final game of the season - our last chance to watch Jimmer play in person.

The first game we went to this years was against Utah State. We showed up 15 minutes late, parked across the street from the Marriott Center, grab a bench to ourselves, and have no one sit in front of us. It was a great game, competitive til the end and the Cougars came out on top.

Boy how things change!! By the end of the season, Jimmer-mania had swelled to epic proportions and if you weren't there an hour early, you were going to have to watch the game on television. If you wanted a decent seat, I guess you needed to be two hours early because we were squished in at the very top. 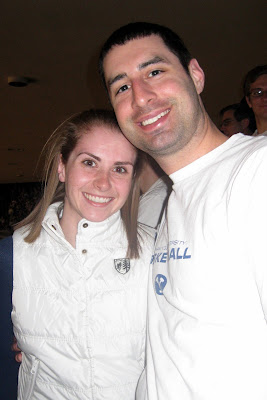 I saw this at Walmart and was glad that someone else took a picture because when I went back with my camera it had been taken down. Just one example of how great it is to live in Provo right now and watch our college town transform into Jimmerland! Hoop it up 32!!

** Picture is not mine and was borrowed from CougarBoard here.
Posted by Melanie Howe No comments:

3 feet of the good stuff!

Our lives this winter have predominantly been ruled by two things: skiing/snowboarding and BYU basketball. Last weekend was a tough call because we had two really enticing options - watching round 2 of BYU vs. SDSU or heading for the mountains to enjoy 3 feet of perfect powder.

We chose the powder and unfortunately a lot of other people did too. The crowd at the bottom of Mineral Basin was RIDICULOUS. We stood in this line for close to an hour. But the snow was AMAZING and the time spent in line was completely worth it! 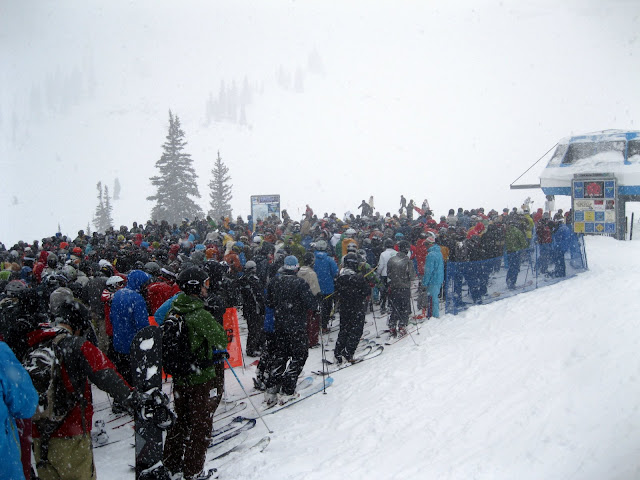 Although the powder was light and fluffy, the fact that it was 3 feet deep sometimes posed a problem. Amy fell over backwards, down hill and butt-first, and had to be lifted up by her arms because she couldn't stand on her own (When pulling someone up, I recommend grabbing the person under their arms and not by their mittens - those just slide right off).

At one point I lost momentum in a flat spot and was buried up to my waist in snow. For the life of me I could not lift my legs and eventually had to fall sideways and roll until I got to a place where the snow had been packed down enough to stand. Nat, however, took the cake.

Amy and I met up at the bottom after becoming separated from Nat. After waiting for awhile we called her phone. Reception isn't always the best on the mountain, so when we heard Nat say, "I'm dragging a tree" we thought we heard wrong. She must have hit a tree, or run over a tree.

But we she finally got to the bottom there was indeed a branch stuck in her binding. She managed to break most of it off, but there was a small piece that wouldn't come out. The best part was all the people that kept telling her, "You know you have part of a tree stuck to your ski," as if she didn't notice the pine bough attached to her leg :) 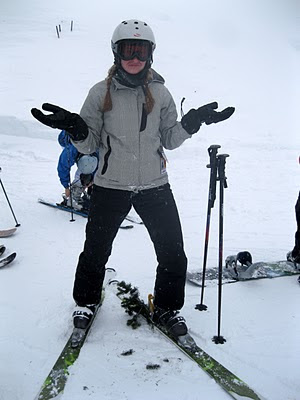 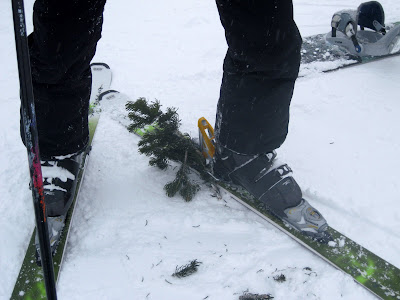 Title: Dave does laundry while Mel is at work

Critical Eavulation: Clothes were clean, dry, and less wrinkled than if they had been left balled up in the dryer. Folding is overrated anyway, right? I guess I'll give him a pass. 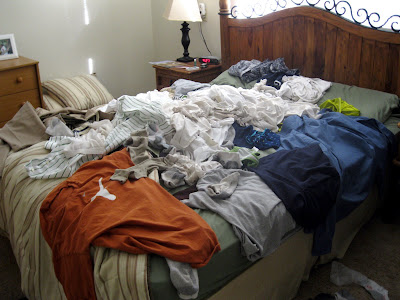