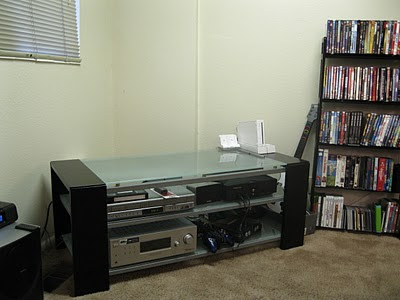 A couple weeks ago our TV starting acting strange. It would randomly turn off, and then turn back on a few seconds later - not desirable, but we could live with it. Then it started happening every 30 seconds. Now we were beyond our tolerance limit and decided to call a repair man.

They came and replaced a part, after which our TV worked for one day and then died; Nothing but black screen.

It took us a week to get a repair guy back to our house (scheduling is a beast when you're both gone all day). After messing with the TV for a few minutes, our repair guy determined that it needed to be taken back to the shop for further investigation.

And so we have been without for almost two weeks now - a real hardship, I know. I don't think I realized how much the TV was on until it wasn't:

Instead we have been playing games, getting ahead with homework, cleaning out the house, organizing photos, reading, listening to music, going to bed on time, or even EARLY.

So it hasn't been all that bad. But I will be glad when it comes back :)
Posted by Melanie Howe

I have been absolutely shocked at how often our TV has been on lately. It seems that the Disney channel is on far too frequently to distract the kids while they are eating breakfast and lunch and during bottles. Maybe we need our TV to die so that we can make some better habits in our lives... but even as I write that I shudder because I have become dependent on it in so many ways. But good for you. :)