Nothing like a bomb threat from a vampire to start off your morning!

A few blocks near our building were closed down this morning after a man with a bomb-like device wired to his arm told people he was a vampire and wanted to eat people. The police and SWAT team were called in to investigate, and we were able to watch events unfold through a pair of binoculars. By far the most exciting thing to happen in the office today. The official story can be found here.

I'm guessing this guy may have been a bit delusional, but with Forks only a few hours from here, maybe he was telling the truth... 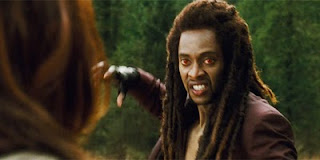 Wow- there is a striking resemblance between those 2!

I burst out laughing when I read that. Glad your ok!