Last week Flat Stanley was here visiting from my niece in Texas.

The day Stanley arrived it was pouring rain. The first thing I did was had him laminated so he wouldn't disintegrate the moment we stepped outside. Once he was waterproof, we set off to visit the Space Needle. With his lack of suntan and North Face fleece, Stanley practically looked like a local. 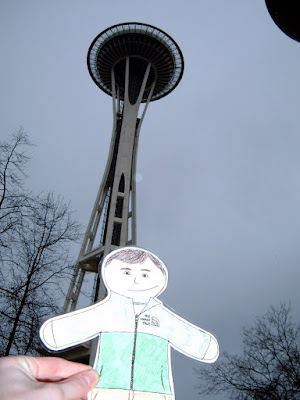 Later in the week the weather cleared up so I took Stanley down to the waterfront. We watched cars unload from an arriving ferry, chased some seagulls, and strolled in and out of shops. While we were exploring, I found a bunch of picnic tables at the end of pier 56. I am really looking forward to warmer weather so I can enjoy my lunch hour down on the water with a good book! 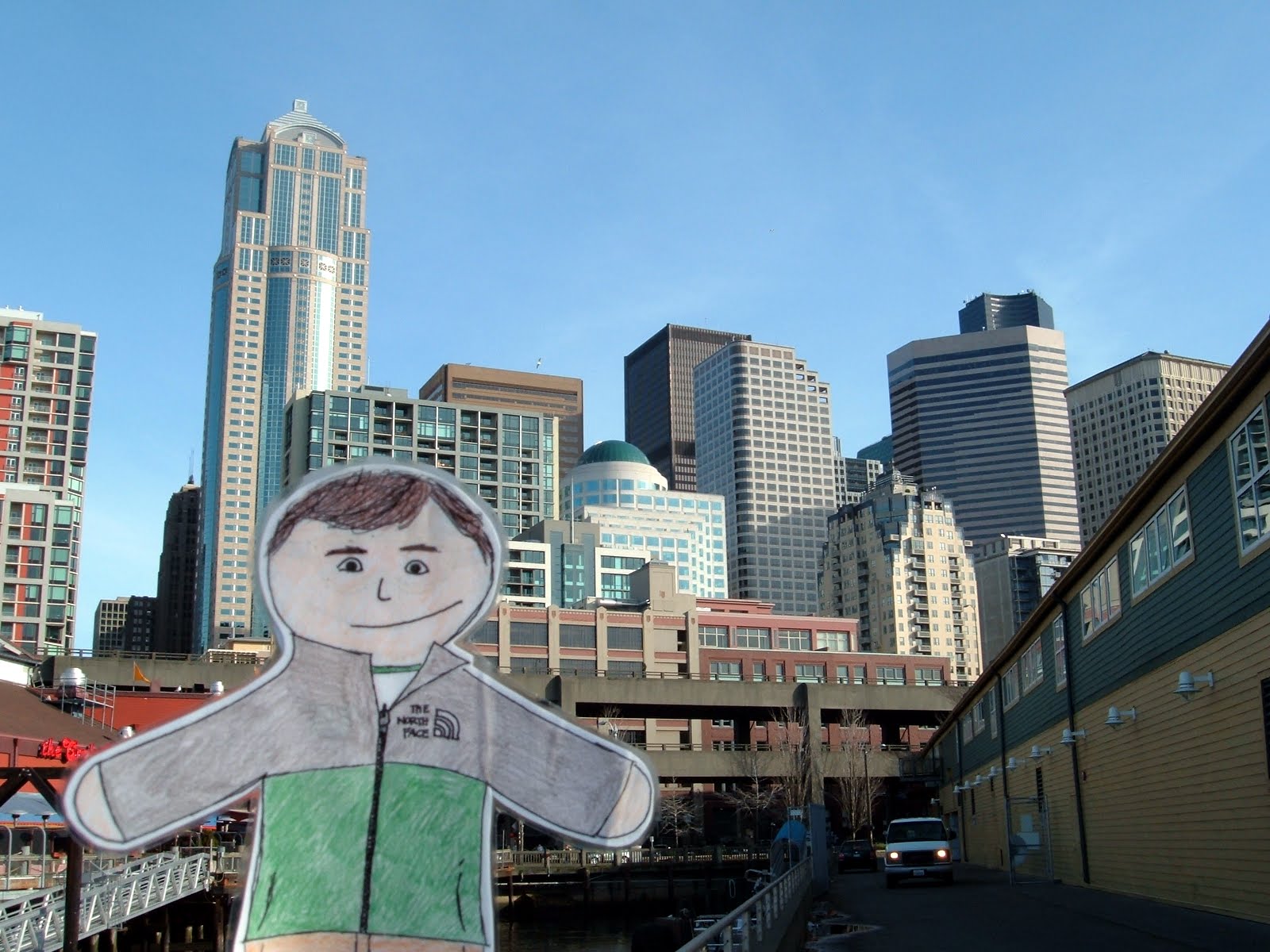 On our way home we stopped at Pike Place Market to look at the vendor booths, and we bought some kumquats (I love to say that word) and honey straws. 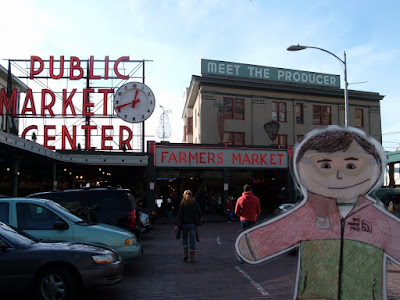 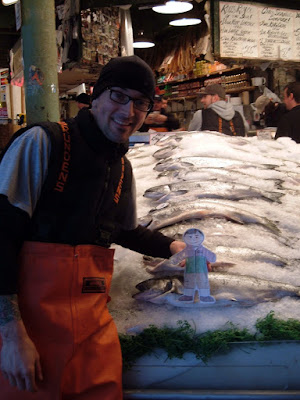 Over the weekend, we brought Stanley with us to the cabin for a ski trip. Most of the time he was squished upside-down in my pocket, but he was able to get out for a couple pictures by the chairlift and in front of the lodge. 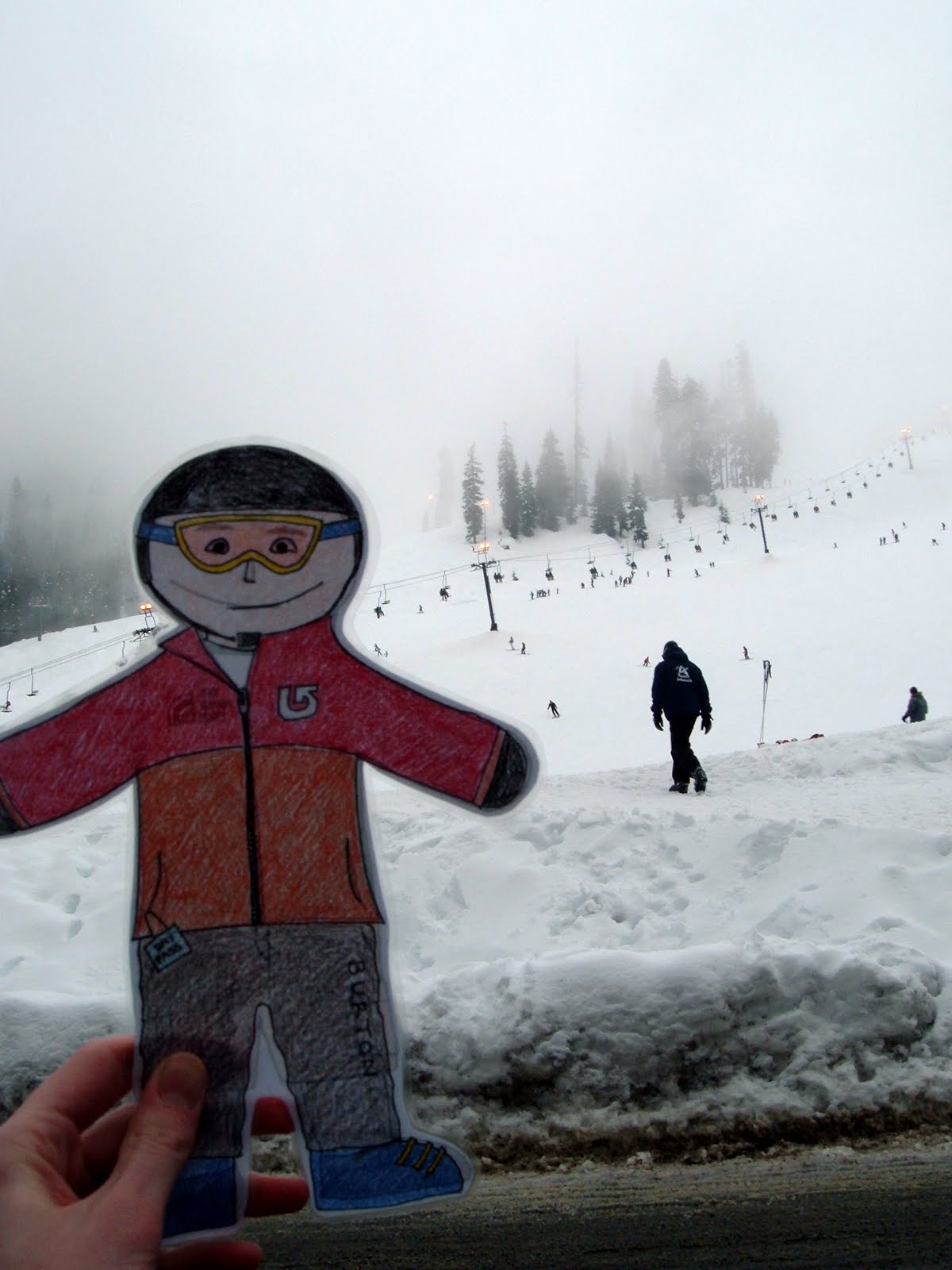 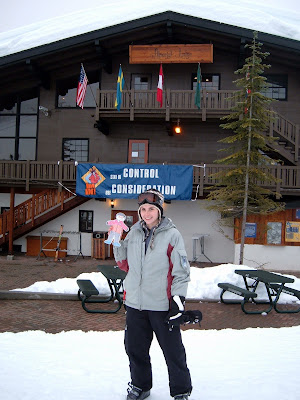 I had a lot of fun seeing the sights and getting reacquainted with my own city - thanks for sending Flat Stanley to us Ally (& HAPPY BIRTHDAY)!!
Posted by Melanie Howe 3 comments:

Looking for a date idea?

Today the weather in Seattle is absolutely beautiful. During my lunch I went down to the waterfront to take a walk. At the pier by the aquarium I saw this sign: I didn't even know there was such a thing! If only Dave and I had known it was happening this past weekend... Actually, you couldn't pay me a million dollars to do this. I like diving, but I would never want see what lives at the bottom of the Puget Sound.

In case you're wondering (like I was) what an"octopus census" entails, here's what get's recorded on the official Giant Pacific Octopus Census Data Sheets:
Good stuff!
Posted by Melanie Howe 2 comments:

Do you see what I see? 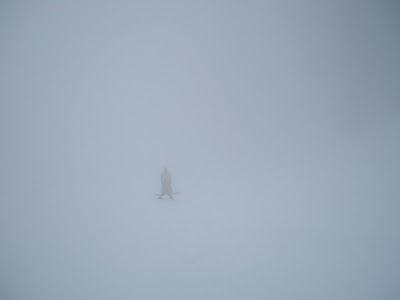 Looking at this photo you might be thinking, "What is that supposed to be a picture of? The only thing I see are some dark blobs, relatively humanoid in shape."

That's all we could see too. This weekend we went skiing in the thickest fog EVER. At 10 feet, people, trees, etc were visable as dark shadows; Beyond that, you couldn't see anything at all. Everything just disappeared into the mist...

The only way I managed to stay with Dave that afternoon was to listen for the sounds of a scraping snowboard whenever he hit a patch of ice. Luckily there were plenty of ice patches for him to hit so we never got separated for long.
Posted by Melanie Howe No comments: 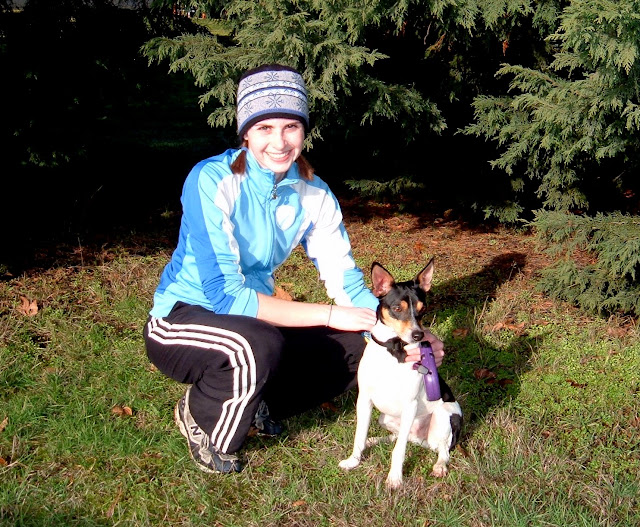 In the Northwest it's pretty much acceptable to bring your dog anywhere - the grocery store, Macy's, etc... so we decided to pick up Jobe from my parents house to take him on the "Ultimate Walk."

The orienteering course this week was at Marymoor, a huge park only 10 minutes from our house. The weather was also BEAUTIFUL. A sunny day in January is pretty rare here, so we felt pretty lucky!

At first we were a little apprehensive about bringing Jobe with us. How would he feel about crawling through thickets, running in tall grass, wading through marshes and meeting tons of strangers? It could have been a long day if we had to drag a dog 5 km from marker to marker. Turns out we didn't need to worry - by the end we were dying and he wasn't even panting. I guess some of us need to get more exercise :)
Posted by Melanie Howe No comments:

My sister Amy had her baby early this morning!

Anne Hindman arrived almost two weeks before her due date at 6 lbs 11 oz, 17.5 inches, with lots of dark hair. She is named after both her grandmas - Mari Anne and Chris Anne. Both Amy and the baby are doing wonderful. 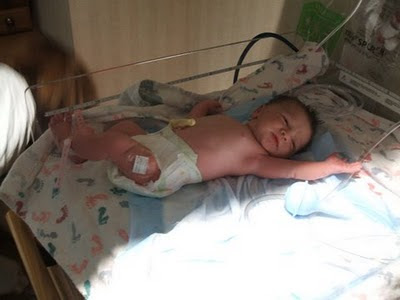 Last night Dave and I were glued to the TV, watching the Sunday night football matchup between the Jets and the Bengals. Although the Jets won 37-0, it was actually one of the most intense games we've watched all year...

As a special treat last fall, Dave and I agreed we could each spend $50 on whatever we wanted. The only stipulation was we couldn't complain, nag, etc... about how the other person spent their money (this rule was mostly invented for me).

I got some clothes; Dave bought his way into the office Fantasy Football league. Based on past performance I thought this was going to be money down the drain, but I did my best to hold my tongue in accordance with the rule.

Dave's team, the "Sea Cows" got off to a rough start, but soon turned around and stormed their way to the top seed in the playoffs. Last night was the championship game. The Sea Cows were down by 7 with only the Jets defense left to play. The Jets have done us good all year, but every Cincinnati score againts New York's defense would take points away from the Sea Cows.

Well, the Jets held them scoreless, and the Sea Cows sailed on to victory. First place out of 12 teams - yeah Dave! I hope you'll let me help spend the prize money :) 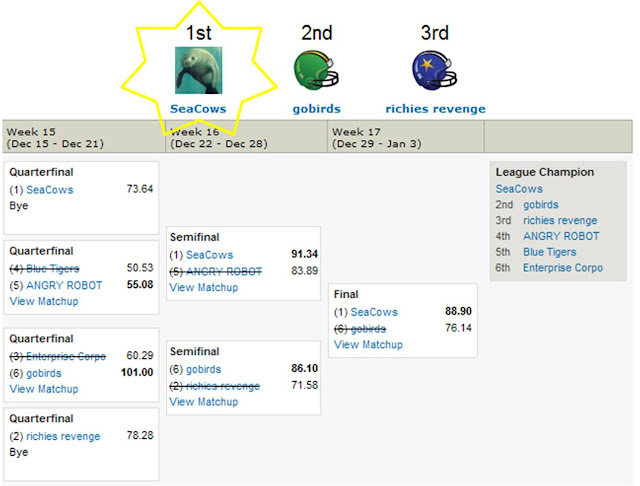 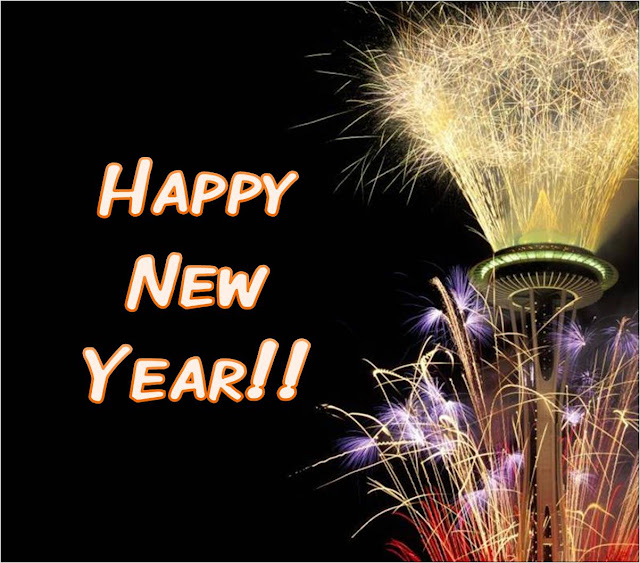 P.S. If you read this Ally, that is what the Space Needle looks like :)
Posted by Melanie Howe 1 comment: